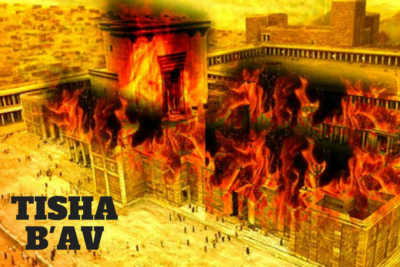 Earlier this week and just days before Tisha b’Av on August 1, Palestinians issued what could be interpreted as new declarations of war over Israel and the Temple Mount. While Palestinian rhetoric on the topic is nothing new, recent statements have escalated the longstanding controversy into what could be a whole new level. In any case, the current crisis, which began July 14, is not likely to end any time soon. (A timeline of events is accessible at http://www.jpost.com/Arab-Israeli-Conflict/Timeline-of-Temple-Mount-terror-and-tensions-500314.) If you are not familiar with the strategic and prophetic significance of Tisha b’Av and the weeks preceding it, a brief description of this critical season can be read at https://lightofzion.org/biblical-feasts/today-starts-straits-hebrew-calendar-heres-navigate-season-holy-spirit/.)

To summarize the past two weeks’ events, on July 14, three Palestinian terrorists came down from the Temple Mount and killed two Israeli police officers. In response, and as a security measure to prevent similar attacks, Israel installed metal detectors at the entrance to the Temple Mount. These were the same sort of airport metal detectors through which all Jewish and non-Jewish visitors to the Western Wall must pass. Palestinians said the metal detectors amounted to an illegal Israeli takeover of the Temple Mount. They retaliated by calling for a “Day of Rage” last Friday. There were riots and acts of murderous terror against innocent Israeli civilians. Palestinians successfully encouraged anti-Israel protests in many nations and rallied their cause across the Muslim world, particularly Turkey. PA President Abbas’s Fatah Party announced the “campaign for Jerusalem has effectively begun, and will not stop until a Palestinian victory and the release of the holy sites from Israeli occupation.”  https://www.wsj.com/articles/why-israel-removed-the-metal-detectors-1501022738  (Interestingly, the crisis developed on the heels of a heated protest by many Jews living in the nations against the Netanyahu administration for denying them the right to pray audibly and publicly at the Western Wall in styles not authorized by ultra-Orthodox Israeli rabbis.)

Reportedly, Jared Kushner brokered a resolution of the crisis between Israel and Jordan, which technically maintains quasi-jurisdiction over the Temple Mount. Acquiescing to Jordan’s demands, Israel removed the metal detectors. Jordan released a detained Israeli embassy guard as Abbas instructed East Jerusalem Palestinians, “Jerusalem is ours and it is our capital. What you are doing [through violence and terror] is correct and we supported and will support all that you did and are doing.” (https://www.palwatch.org/main.aspx?fi=157&doc_id=21631)

Hamas in Gaza then joined Abbas’ Fatah leadership in calling for another Day of Rage this Friday in Israel and around the world. Days of Rage typically result in not one, but several days or more of murderous terror and violent protest. Meanwhile, according to this week’s survey, 77 percent of Israelis disagree with PM Netanyhu’s decision to remove the metal detectors. Some conservative Israeli government leaders say they will now call for a vote of no confidence against him, which would again threaten his tenure as Prime Minister.

Friday in Israel, the declared Day of Rage, will begin Thursday evening and night in the Americas. So today we are releasing a call, not for Christian rage, but for prayer for a “day of the vengeance of our God” (Isaiah 34:8; 61:2). This is not to seek a release of God’s wrath, but His holy justice. The phrase “day of the vengeance of our God” is included in the broader, messianic Jubilee proclamation of Isaiah 61:1-11: “The Spirit of the Sovereign Lord is on me because He has anointed me to proclaim good news to the poor. He has sent me to bind up the brokenhearted, to proclaim freedom for the captives and release from darkness for the prisoners, to proclaim the year of the Lord’s favor and the day of vengeance of our God, to comfort all who mourn, and provide for those who grieve in Zion. …” Here are 10 key points to consider as you pray:

Remember that despite the tragedies and trials of Tisha b’Av, God promises to redeem the day. “The fasts…of the…fifth month [Av] will become joyful and glad occasions and happy festivals for Judah.” (Zechariah 8:19)

Your ticket for the: Temple Mount Crisis is Escalating as Tisha b’Av Approaches: How to Pray