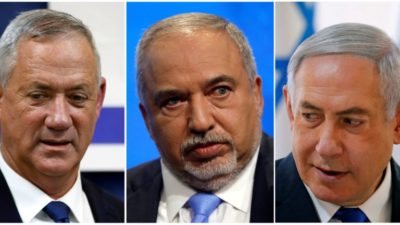 “Without wise leadership a nation fails.” (Proverbs 11:14, NLT) It has been two weeks since we last wrote about the formation of an Israeli government. Much has transpired that has left us no closer to a resolution than before. There have been behind the scenes negotiations, important ministerial appointments, ultimatums, a brief war, and we find ourselves closer to another round of elections than ever before.

The time limit for Benny Gantz, leader of the Blue-and-White Party, to form a coalition expires November 20. At that point, a 21 day period begins during which any member of the Knesset (parliament) can try to piece together a coalition. If this does not happen, Israel will head towards its third round of elections in less than a year. In that case, polls indicate the stalemate would continue. Our leaders, meanwhile, have been able to agree on one critical issue: Without an official government and budget, the country will soon destabilize and its social structures will start to disintegrate.

Benny Gantz has not been able to recruit party leaders from Netanyahu’s Likud-based, right wing block, a necessary step for him to form a coalition. One such leader, right winger Naftali Bennett, announced a willingness to join Gantz. But within two days he was appointed Defense Minister by PM Netanyahu, thereby removing any possibility of defecting to Gantz.

Avigdor Liberman, leader of the Israel-Our-Home Party, recently said he would join forces with whoever demonstrated willingness to compromise to create a government. Rebuffed by Netanyahu, he is presently working out an agreement with Gantz. But without Likud, they still fall short of the minimum number of seats to form a coalition. As we write, President Rivlin is strongly urging Likud to join a Gantz-Liberman alliance, or at least ally with Blue-and-White. However, this would require Netanyahu to abandon the ultra-Orthodox religious parties, which he still refuses to do.

After last week’s short war with Palestinian Islamic Jihad, the Israeli Arab parties blasted the government, voicing unified support for the terrorists. Since then, Netanyahu has characterized any government that includes the Arab bloc as an existential threat to the State of Israel. (He was not referring to the minority of Arab leaders who are upstanding and willing citizens of a Jewish state,) It seems unlikely the Arab bloc will be part of any coalition in the near future. They could actually end up as the main opposition party, which would give them, as Netanyahu warns, unprecedented power in the very country they openly seek to destroy as a Jewish state.

Attorney General Mandelblit could announce his intent to indict Netanyahu by the end of this month. This would remove one layer of uncertainty in the chaos, but likely replace it with a third election in which an acting prime minister under criminal indictment would run for political office. The practical and legal impact of such a scenario represents unchartered territory.

As we face another turbulent week in the land of milk and honey, we are not without focus on God’s overarching purposes and direction in prayer.

Your ticket for the: Is Time Running Out in Israel?