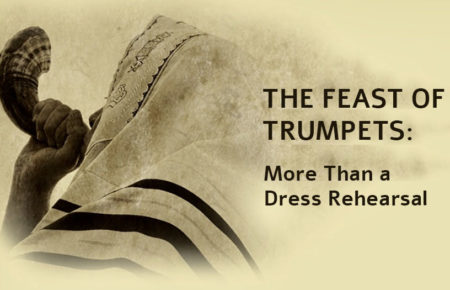 The atmosphere in Israel this week is tinged with lively expectancy, despite the drama of political posturing and military threats of Iran. Around the country, preparations are underway for Yom Teruah (Day or Feast of Trumpets), also known as Rosh HaShanah (Head of the Year) on September 30. Yom Kippur (Day of Atonement) follows ten days later; and on October 14-21, we celebrate Sukkot (Feast of Tabernacles). Collectively, these three moedim (appointed times) are known as the Levitical fall feasts. They are God’s appointed times to meet in holy love with His people in special ways. [1]

Many believe the fall feasts will be fulfilled at Messiah’s Second Coming. Mainly, this is because the spring feasts of Leviticus 23—Passover, Unleavened Bread, First Fruits and Weeks—were all fulfilled at Yeshua’s first coming in His Crucifixion, burial, Resurrection and at Pentecost, respectively. As a result, more and more Christians celebrate the fall feasts as a type of “dress rehearsal” for future, prophetic events.

To be sure, these feasts can be observed as preparatory foreshadowings of Messiah’s return. The Feast of Trumpets could well be fulfilled at the “catching up” or rapture of the Church and onset of God’s judgment of Israel and the nations. (1 Cor. 15:51-52, 1 Thess. 4:16-17, Mat. 25:31-46). The Day of Atonement seems highly prophetic of God’s judgment and Israel’s national salvation. (Zechariah 12:9-10, 13:1) The Feast of Tabernacles quite likely depicts Yeshua’s dwelling with humankind on earth during the Messianic Age. (Zech. 14:9, 16-19)

The Levitical feasts, however, are packed with significance in and of themselves, notwithstanding their future (or past) fulfillments. For that reason the Scriptures never directly refer to them as “dress rehearsals.” [2] To view the moedim solely or primarily as rehearsals of future events limits their meaning and relevance for today. It diminishes the present day blessing God desires to release through them to His people.

Uniquely on Yom Teruah we can hear the Spirit cry, “Awaken!” to His people through the raw blast of the shofar. The plaintive call rouses and stirs our souls down to their depth. God is summoning our full attention, for judgment is coming. (Romans 14:12) Bear in mind the Hebrew word for Spirit is the same word for breath; namely, ruach. The trumpet’s piercing blast is, in a sense, a manifest sound of the Ruach, uniquely lifting our focus from worldly concerns to realities above.

But that’s not all. Trumpets were used in ancient Israel to sound an alarm for war. In the age of Kingdom conflict in which you and I live, the shofar’s blast can still sound a battle cry in the Spirit realm.Used properly, the shofar can serve as a tool of intercession in spiritual warfare on Yom Teruah.

Rabbinic tradition associates Yom Teruah with the date of Creation. This is why the feast has come to be known as Rosh HaShanah. On this day we agree with the Spirit, through the trumpeting of the shofar, that all creation belongs to its Creator. This can be seen as a type of authoritative, annual decree realigning the created order.

In biblical times trumpets were sounded to announce the coronation or coming of a king.This association remains a powerful aspect of Yom Teruah today. As the shofar blasts we—and perhaps all creation—are reminded of the blessed hope of our soon coming King.  “For the Lord Himself will come down from heaven…with the trumpet call of God, and the dead in Christ shall rise first. After that, we who are still alive and are left will be caught up together with them in the clouds to meet the Lord in the air. And so we will be with the Lord forever. Therefore, encourage each other with these words.” (1 Thess. 4:16-18, NIV)

Could it be that our sincere worship and engagement with the Lord on Yom Teruah  is less of a “dress rehearsal” for the future, than a potent, Spirit-filled intercessory act for the coming of that glorious day? The Feast of Trumpets is a day of worship, sobriety and rejoicing in the “reset” with YHVH associated with the start of a new, secular Hebrew year. It is an ideal time to surrender anew to Him and receive a fresh infilling of His Spirit. So let us celebrate the hope of the coming of His Son on Yom Teruah, but at least as much, the joy of His presence among us now.

[1] Christians can freely choose to observe or not observe the Levitical feasts. (Col. 2:16-17, Ro. 14:5-6a) The choice not a matter of salvation or necessarily sanctification. But neither does it mean the feasts are irrelevant or that God no longer engages with His people through them.

[2] The concept of the fall feasts representing “dress rehearsals” has developed in some Christian circles in recent years, by extended implication of the Scriptures. We appreciate the comparison so long as it does not detract from focus on the Word-based, present day ministry of the Holy Spirit centered on Yeshua.

Your ticket for the: The Feast of Trumpets (Yom Teruah): Much More than a Dress Rehearsal