One Critical Challenge to One New Man 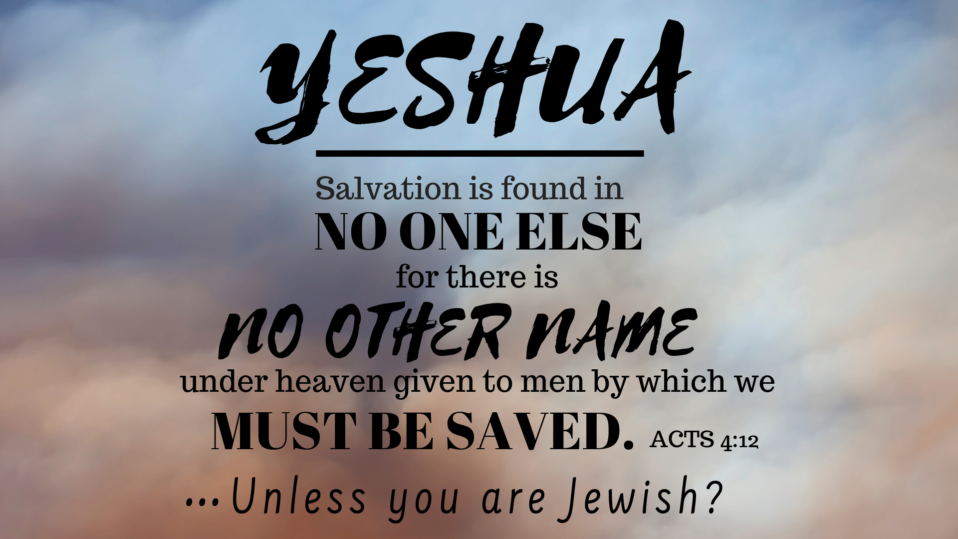 ARTICLE SUMMARY: While deeply grateful for Christian support of Israel, we have watched increasing numbers, especially leaders, seek to bless the Jewish people at the cost of compromising, withholding and then denying, the Gospel. This approach was well intended. A remnant of evangelicals wanted to heal 2,000 years of Christian anti-Semitism by demonstrating unconditional love to Israel. Over recent decades, they have ministered with sacrificial kindness and gracious sensitivity. As a result, Christian friendships with Israel are starting to mature. In this process a critical time has now arrived, calling for another approach. It is time for Jewish and Gentile believers, together as one, to be and share a living testimony of Yeshua. Such a testimony has scarcely been seen or heard by the international Jewish community. Believers seeking this new way will want to discern how to rightly navigate it. We pray this letter can serve as a step in that direction.

This is a heart to heart letter to Christians in the nations who support Israel. Embracing God’s covenant love for the Jews, some of you have sacrificed much, or endured real hardship, or both. We are deeply grateful and wholeheartedly thank you. You have blessed Yeshua’s people and we pray you will be personally, richly blessed.

In this context, we feel it is important to share a message of critical significance. We start with an explanation as to how well meaning believers who love the Jewish people can be subtly led astray from the purposes of God’s heart. We end by sharing how together we might better align with the Scriptural expression of His redemptive plans for Israel.

Keep in mind the devil has deceived Christians about Jews, and Jews about the Christ, ever since New Covenant times. It would be prideful for us to feel exempt from such deceptions. Even fiery, truth loving believers (for example, Martin Luther) have lapsed into serious error over Israel. A very brief historical overview recalls the deceptive doctrine of “divine disdain” that took hold not long after the apostolic era. This theology erroneously taught that God regards the Jews with divine disdain or contempt because they disdain Jesus. Early Church officials required New Covenant believers to treat Israel in a manner reflecting this alleged disdain and contempt.

By the turn of the 21th century, a relatively fast-growing remnant of evangelical believers started reaching out to Israel in sincere, unconditional love. Their hearts were repentant over historical Christian mistreatment of the Jews. They genuinely wanted to bless Israel, but encountered an unexpected problem.

Because of the same historical anti-Semitism the evangelicals wanted to heal or reverse, many Israelis distrusted any Christian who wanted to “bless” them. Suspicious of their motives, Israelis had no desire or willingness to relate to evangelicals. Sadly, we Jews had learned to automatically associate the Gospel with forced conversions and murderous persecutions. Many Israelis today—but far fewer than decades ago—still harbor this view.

THE EVANGELICAL SOLUTION BECAME NO EVANGELISM

In order to gain the Jews’ trust, and thus the ability to bless Israel, Christians were told by Israeli officials they would have to adhere to a policy of silence regarding the Gospel. Though not written into law, this admittedly undemocratic policy is still in effect. Discussions of salvation in Yeshua might be considered proselytizing, possibly ending the formal, public ministry of Christian leaders in the Land. So the “ability” to give “unconditional” Christian comfort or loving support came—and still comes—with a price. In that sense it is not quite unconditional. Evangelicals ministering publicly to mainstream Jews must demonstrate they do not and will not share the Gospel with them or otherwise promote faith in Yeshua. In some respects, this is understandable as typical of Gospel resistant nations. But there’s more.

To meet anti-evangelism requirements, mounting numbers of “evangelical” leaders have made disturbing pronouncements. In the past year, some Christian leaders have announced their solid commitment not to share the way of salvation with the Jews. One well known ministry leader even stated publicly that he does not believe Jews need to be saved. Another has overtly apologized for having said in the past that Jewish people need salvation. Yet the Scripture states, “My heart’s desire and prayer to God for the Israelites is that they may be saved.” (Romans 10:1)

Do today’s evangelical leaders genuinely think Jews can be saved apart from faith in Messiah Yeshua? Are they speaking entirely truthfully to the Jewish public? Or, as we suspect, are some Christian leaders actually coming to believe that God has a special way to forgive sins available only to Jews? If so, this represents a serious departure from biblical, historical, orthodox Christianity and Messianic faith. It would reflect a demonic deception taking hold among followers of Messiah who care about Israel. (For other believers, this thinking results from an overemphasis on nonMessianic Jewish, rabbinic interpretations of Scripture. But that is another topic.)

THE ERROR OF DUAL COVENANT THEOLOGY

Some Christians who do not believe in dual covenant theology justify withholding the Gospel from Israel on other grounds. They believe God will do a totally sovereign work in saving Jews from their sins. Consider, however, what Paul writes—specifically to Gentiles—and specifically on the topic of Israel’s salvation: “How can they believe in the One who saves if they have never heard about Him? And how can they hear unless someone tells them?” (Romans 10:14) Peter speaks specifically to the Jews of his day, and to us, when he clarifies, “There is no other name under heaven given to men by which we must be saved.” (Acts 4:12)

A LOOK AT THE FRUIT

What has been the overall impact of Christian friendships with Israel in the 21st century? General statements are impossible to make. But on the whole, it seems more Israelis are coming to think of Israel supportive “evangelicals” as genuinely good friends who do not try to evangelize, share a common heritage, and spend lots of money in the Land. Many still feel that evangelicals’ main interest in Israel is the fulfillment of prophecy, probably because for many evangelicals, that is (sadly) still true. But a growing perception is that good Christians are noble hearted, admirable people who worship the God of Israel and out of respect for Judaism, refrain from sharing the Gospel.

The Gospel does not threaten—or attract—Israelis through their friendships with Christians because it is not being effectively communicated in either word or deed. To be sure, more and more Israelis are curious about Yeshua. They may see Him as a good, even honorable Jew. They may conclude His teachings can work well for Gentiles. They can even respect Christianity. All these are positive developments.  But, since dual covenant theology is communicated through evangelical silence, Israelis persist in thinking God has something or someone better for the Jews. We often hear Christians say their Israeli friends are “close to accepting Yeshua,” or even secret believers. With all due respect, this is generally just wishful thinking.

The Scripture exhorts, “Salvation has come to the Gentiles to make Israel jealous.” (Romans 11:11) To be sure, when Christians say their love for Israel comes from Jesus, some Israelis are inspired toward stronger faith—usually in Judaism, not Jesus. Hopeful and well meaning Christians can easily mistake such a renewed interest in Judaism as evidence of an effective witness. But, barring scattered and rare exceptions, Israel is not (yet?) being made jealous for Yeshua. Being provoked to jealousy for relationship with God through traditional Judaism is not the point of Romans 11:11.

ONE NEW MISTAKE ABOUT ONE NEW MAN

In addition to withholding the Gospel and publicly denying Israel’s need for salvation, when evangelicals minister publicly to Israel, they often intentionally distance themselves from Messianic Jewish brothers and sisters. Messianic Jews, by their very existence, represent a denial of dual covenant theology. Christians who fellowship closely or work publicly with them can be seen by Israeli officials as encouraging the sharing of the Gospel. So instead of aligning as one new humanity in the spirit of Ephesians 2:15, an intentional mis-alignment takes place.

Christian leaders who avoid meaningful association with Messianic Jews would presumably distance themselves from all the New Covenant apostles—and Yeshua Himself—were they alive today. The formal disconnection from Messianic Jews can strengthen the anti-Messiah/anti-Christ spiritual stronghold over Israel. Persecution against Israeli believers can worsen, albeit indirectly, as a result. But God has another way, a new way for a new day. If friendship without the good news was a decent first step in Jewish-Christian relations, friendship with good news will be an even better next step.

A NEW WAY FOR A NEW DAY

To be sure, there has been blessing and good fruit from non-Gospel preaching friendships between Christians and Jews. The approach was important and probably essential in Israel’s early years. In some cases, it will remain important—as long as believers do not withhold the Way, Truth and Life from fear, political correctness or insensitivity to promptings of the Holy Spirit.

In 2018, seventy years after the rebirth of the Jewish state, the relationship between Israel and the Church is maturing. Gradually, more and more Jews understand that true Christians will love them even if they (the Jews) never confess faith in Yeshua.This is another positive fruit resulting from the dedicated work of Israel supportive evangelicals.

At the same time, approaches that were required to bless Israel in a post-Holocaust culture, and may still be appropriate in some contexts, are giving way to the ministry of One New Man in Messiah. One New Man, described in Ephesians 2:14-16, refers to Jews and Gentiles who form one Body in Messiah Yeshua. One New Man clearly does NOT refer, however, to friendships between Christians and Jews who reject Yeshua as their Messiah.

The time has come for evangelicals to share the good news of salvation with Israel, by the Holy Spirit, gently yet forthrightly. We urge Christians to pray as stated in Romans 10:1 (above) for their Israeli friends—and then do more than pray. In past centuries, Christians erred by trying to force the Gospel on the Jews. Today, Christians must not err in trying to free the Gospel from the Jews.  We also encourage believers from the nations to remember and reach out to their Israeli brothers and sisters in the household of faith. (Galatians 6:10)

Yeshua prayed His followers would be “brought to complete unity. Then the world will know that You sent Me.” (John 17:20-21) “Complete unity” requires the mature formation of One New Man. A biblical evangelism strategy for all nations, including Israel, is the display of loving unity among believers, Jewish and Gentile. In the power of Holy Spirit, together we can minister the forgiveness of sin through Yeshua and restored relationship with the Father. Israel and the nations—and perhaps the final global harvest—are waiting.

Your ticket for the: One Critical Challenge to One New Man

One Critical Challenge to One New Man