The Intercessory Sacrifice of Praise 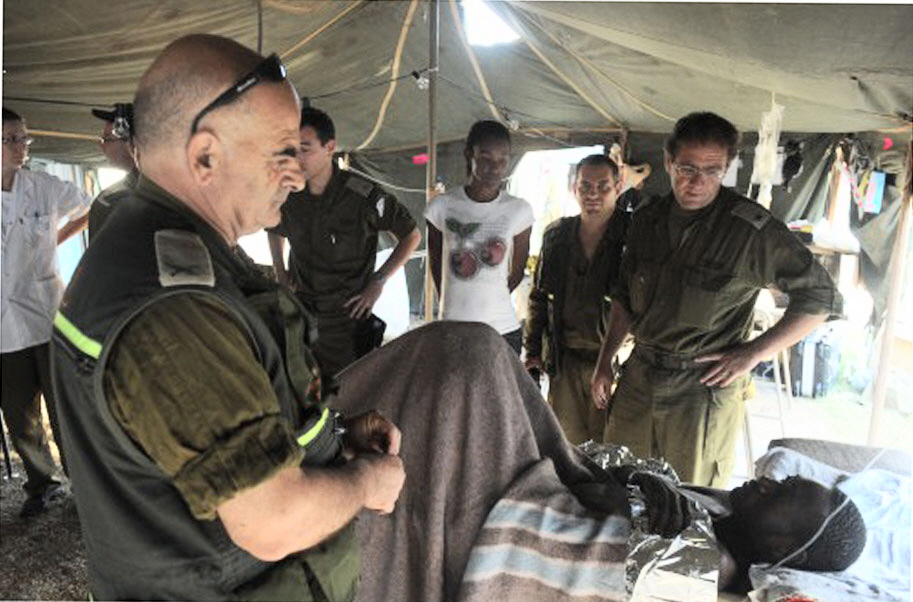 Grace and glory to you, as together we serve the coming Bridegroom King. Those of you who have been faithful friends to Israel for any period know there’s never been a time the 61 year old country has not been in crisis. For years we’ve prepared regular updates about Israel’s critical needs and prayer points. But this month, despite developing exigencies, we feel led of the Lord to do something different. We share Israel’s good news of the past four weeks—as a sacrifice of praise. We do not offer prophetic perspectives, but focus on praise. Not only is God pleased with praise, but praise itself can serve as intercession.

On behalf of our people, we deeply thank each of you who intercede for Israel—you have borne fruit! So please join us in offering the Worthy One a sacrifice of praise as you read our report. We believe you’ll be blessed as you do. (Proverbs 25:25)

Israel rescue and medical relief to Haiti
Dubbed Operation Light to the Nations, Israeli disaster relief efforts in Haiti proved so heroic as to garner international accolade. In the US, even CNN could say only good for the country’s work. Dr. Jennifer Furin of Harvard Medical School summarized the situation to reporters: “I’ve been here since Thursday; no one except the Israeli hospital has taken any of our patients…. It’s like another world here compared to the other hospitals. They have scanning machines, operating theaters, ventilators, monitoring. It’s just amazing.” Ten days after the quake and against all odds, Israelis dug a young man out from the rubble—appropriately named Immanuel (“God is with us.”) “O, that men would give thanks to the Lord for His goodness, and for His wonderful works to the children of men” (Psalm 107:21).

2009: a year of relative peace
During 2009 the country endured the fewest number of terror attacks and casualties in nearly a decade. This is attributed to the success of Operation Cast Lead in Gaza, improved intelligence that thwarted numerous planned attacks, and the perceived strength of PM Netanyahu. “I will lie down and sleep in peace, for you alone, O Lord, make me dwell in safety” (Psalm 4:8). 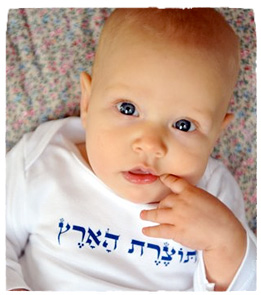 The shirt says “a product of the land of Israel”

Sadly, legal abortions are easily obtainable in Israel. As many Jewish children have been lost in Israel through this sin as were lost in the Nazi Holocaust. But recently the Chief Rabbinical Council declared in an unprecedented statement that abortion is murder. “Tens of thousands of Jewish souls are being lost each year,” the Council said. “In addition to the enormity of the transgression, it is also delaying the redemption.” (HaAretz online, 12/30/09) Rabbis throughout the country were urged to preach against abortion at their Shabbat services on January 9-10. Although these statements were opposed by many, voices are at last being raised to rid the country of this sin. “For you created my inmost being; you knit me together in my mother’s womb. I praise you because I am fearfully and wonderfully made. Your works are wonderful, I know that full well. … Your eyes saw my unformed body. All the days ordained for me were written in your book before one of them came to be.” (Psalm 139: 13-16)

When leading a prayer watch last fall, the Lord spoke clearly to Sandy’s heart that now was a kairos time to mobilize intercession against abortion. Since then our meetings have involved focused repentance and prayer on the subject. She’s also spoken to other prayer leaders, who have taken up the call. You may know that the IDF provides pregnant soldiers with up to three “free” abortions. This deeply grieves the heart of God and curses our people. The Spirit spoke to her, among other things, the obvious: The slaughter of Jewish lives inside the womb, especially by our own army, opens a wide door for the slaughter of Jewish lives outside the womb and hinders the extent to which God can use our army protect Israel. A soon coming war here will be so great that this door must be closed. Please stand with us for the eradication of abortion in Israel, and for great anointing on Messianic pro-life organizations.

Rains pouring down
Due to the seriously dry winter, one of Israel’s Chief Rabbis recently called for a national day of fasting and prayer. The connection between sin and drought was specifically stated: “Because of our sins the water situation is in a serious state. Our duty in this situation is to scrutinize and examine our actions and brings ourselves close to God with all our hearts. We must be repentant with broken hearts and anyone who is able, should fast, if not a whole day, at least a half day.” (Jerusalem Post online, 1/11/10, “Chief Rabbi calls fast day for Thursday”) Rain poured down within a week. Water levels have significantly risen, though much more rain is needed over upcoming weeks and years to end the drought. “O give thanks to the Lord, for He is good! For His mercy endures forever” (Psalm 106:1).

Iron Dome
Israel is progressing well with erecting its “invisible shield” over the country, called an iron dome. The iron dome attracts, deflects and diffuses incoming rockets (but not nuclear bombs). It is hoped the iron dome will be operative within a couple of years. “You O Lord are a shield for me, my glory and the One who lifts up my head” (Psalm 3:3).

Many years ago, Sandy had a dream amazingly reminiscent of the iron dome. Her dream has helped sustain her in the Land, and we believe it will encourage you in your ministry of intercession. Though we were living in California at the time, in her dream, our family had moved to Israel. Rockets had been fired at us from enemies all about. But whenever a rocket was about to fall, the face of a praying believer appeared in the sky. The rockets were attracted to the faces of the intercessors, and hit them instead of Israel. At that instant, the rocket would self-destruct and disintegrate in mid-air. Meanwhile, nobody was hurt—not the praying saints, and not the Israelis on the ground! In fact, the believers were oblivious to the fact they were deflecting an assault, for at the moment of impact, each stayed entirely focused on the Lord in prayer. This not only defended us, but enabled military strategies on the ground to unfold according to God’s will. The dream ended with those of us on the ground lifting our heads in amazement. Friends, today we know this groundwork includes not only natural warfare, but spiritual military strategies—especially the ministry of salvation.

Financial prosperity
Despite the global recession, Israel’s economy prospered surprisingly well in 2009. The country is considered one of the best places in the world to invest in 2010. It has been nicknamed “start-up nation” for its swell of start-up businesses in recent years. (Please note, without detracting from the good news: Because the shekel has done so well, the value of the dollar has dramatically declined. Individuals and ministries like ours that are paid in US dollars have significantly less spending ability as a result.) “Sing to God, sing praises to His name…He brings out those who are bound into prosperity” (Psalm 68:4, 6b).

Israel a prophetic voice to the nations
On January 27, International Holocaust Remembrance Day, PM Netanyahu addressed the nations pointedly and prophetically, quoting the Bible, for the second time in less than six months (the first being his September 24, 2009 speech at the UN). Warning the world against evil regimes, the Israeli Prime Minister summarized Deuteronomy 25:17-19, where God tells us never to forget what Amalek has done. He prayerfully and very specifically invoked God’s blessing to this end. “I will call upon the Lord, who is worthy to be praised; so shall I be saved from my enemies.” (Psalm 18:3).

The feast of Purim, celebrated later this month, commemorates God’s historic deliverance over the ongoing battle with the spirit of Amalek.Click here for information on the prophetic holiday of PURIM.

National health
Much fewer people have died or suffered from swine flu thus far than was expected. “Bless the Lord O my soul, and forget not all His benefits…Who heals all your diseases” (Psalm 103:2-3).

A Bible study (Old Testament only) started in the Israeli Knesset (Parliament) in late 2009, led by Hebrew University Bible scholars. Topics include studies about Elijah, Joshua and Rahab, Jacob and Esau, and Samson. “Good and upright is the Lord, therefore He teaches sinners in the way” (Psalm 25:8).

Increased Aliyah
According to the Jewish Agency (agency for global aliyah), 2009 saw a 17 percent increase in aliyah compared to 2008. “Lord, You have been favorable to Your land; You have brought back the captivity of Jacob” (Psalm 85:1).

The State of the Gospel in the State of the Gospel
Despite increased pressures against believers in Israel, areas of receptivity to Yeshua are increasing as well. On January 29, a Messianic leader from Jerusalem taped an interview with one of Israel’s two primary national TV channels for broadcast in the near future. The interview included a clear presentation of the Gospel and his personal testimony. “Praise awaits you O God in ZIon” (Psalm 65:1a).

I will praise You, O Lord, with my whole heart; I will tell of all Your marvelous works. I will be glad and rejoice in You; I will sing praise to Your name, O Most High. (Psalm 9:1-2)

Your ticket for the: The Intercessory Sacrifice of Praise

The Intercessory Sacrifice of Praise