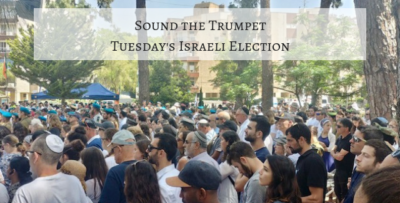 The biblical Feast of Trumpets (“Yom Teruah”), falling this year on September 29-30, is still two weeks away. But this Tuesday, September 17, trumpets of another sort will sound their awakening calls. On that day the citizens of Israel will cast their votes in a second effort to elect a national government. (Since December 26, 2018, we have existed without a formal government under the expanded leadership of acting Prime Minister Benjamin Netanyahu.)

The close timing of Israel’s second election with the Feast of Trumpets seems to reflect God’s behind the scenes, sovereign involvement. Yom Teruah, with its piercing trumpet cries throughout the day, is intended to rouse us from spiritual slumber. The trumpets mercifully forewarn us of God’s soon coming judgment. More commonly known as Rosh HaShanah, Yom Teruah also marks the start of the secular new year, in this case, 5780.* So a national election during the season of Yom Teruah could herald fresh grace for spiritual awakening and change. Israelis are keenly aware of the connection and more than a few are soberly taking it to heart.

Since Israel’s government dissolved nine months ago, God has been shaking our land and people politically and spiritually. We have shared with you about a longstanding and pervasive anti-Messiah stronghold in Israel. This stronghold affects our government, society and culture in profound respects. As a result, ultra-Orthodox political parties have formed a type of “deep state” within the State of Israel. Unfortunately, Prime Minister Netanyahu has throughout his tenure, and to this day, aligned with these ultra-Orthodox parties. To be sure, this alignment is based on political convenience, not shared theology. Meanwhile, for nine months, Israeli followers of Jesus, both Arabs and Jews, have contended together in united prayer and fasting for religious strongholds within our government to break for the sake of greater openness among our people to Messiah.

God is faithful to His covenant with Israel and responsive to the prayers of His remnant followers. We believe one reason a government did not form after Israel’s election in April is that He is shifting some powers that be to establish a government more aligned with His Kingdom purposes.

What is the likely outcome of Tuesday’s election? Nobody knows for sure, except that the results, whatever they are, will likely prove unprecedented. Eleventh hour polls–for what they may be worth–predict no clear winner, with yet another, third round of elections possible. We pray this need not happen. As to who our next prime minister might be, some very respected Israeli intercessors believe God’s time for Netanyahu is ending. Others who we esteem just as highly do not. Bibi has in many ways been an outstanding prime minister and in any event, we are thankful for his leadership these past ten years.

This Tuesday Israelis will vote for one of 30 political parties. With so many listed parties, none is likely to receive enough votes to govern without forming a coalition with other parties. (Recall that Israelis do not vote for a head of state or the prime minister, but for a political party.) Likud, the largest party after April’s election, could not form a cohesive coalition under Netanyahu and appears unlikely to be able to do so now. If no party can put together a coalition—which may well be the case— a “unity government” could form.

In a unity government, parties with opposing viewpoints join together. The top parties select a leader who alternates with others in holding the position of prime minister. Sharing the position of head of state between opposing parties does not seem ideal, particularly in tumultuous times when war could erupt. But God is in control. When man’s ways fail, He sometimes moves in surprising ways.

The centrist-left Blue and White Party (led by Benjamin Gantz) and conservative Likud Party (led by Benjamin Netanyahu) are the most natural parties for a unity government. Mr. Gantz has indicated a willingness to share governance with Likud, but only if Mr. Netanyahu steps down. Another key player from a smaller party, Avigdor Liberman, has stated similarly. Likud theoretically could agree to appoint a leader other than Netanyahu. But that is almost impossible given his tight control over the party. So the intrigue runs deep–as it does with every other possible scenario under public consideration. But again, God is in control and His ways are good. (For an understanding of how the Israeli electoral system operates in greater detail, click here.)

Never in the past have Israeli elections resulted in a standoff like the one we presently face. Moreover, whatever happens on Tuesday, this stalemate threatens to continue. Should that occur, certain laws could be interpreted to give Israel’s president, Reuven Rivlin, discretionary power to help form a coalition. But the nation’s political situation reflects a polarized society not likely to agree easily to any course of action by the president.

Despite the bleak picture in the natural – or perhaps because of it – we are encouraged. Much prayer has gone up toward a major shift in our government, especially for corruption to give way to righteousness. We have contended for persecution against Messianic Jewish believers to give way to genuine freedom of religion. We have cried out for justice for the oppressed and prayed for new gatekeepers who would welcome the King of Glory. We have petitioned heaven for God’s covenant promise to turn the hearts of our people back to Him. Such major change is not necessarily swift or easy, but in the end, it is good. Through the rough and tumble of our electoral process, we trust He is working “to uproot and tear down, to destroy and overthrow, to build and to plant.” (Jeremiah 1:10)

We ask you to pray with us for the leaders of God’s choice to be raised up in our next government. Pray for wise hearted men and women, Jews and Arabs, who will protect the nation during difficult times ahead, even war. Ask God to equip the indigenous Body of believers with strength, even unto revival. Pray with thanksgiving and praise, for He who began a good work in His people will see it to completion.

As we head to the polls this Tuesday and transition toward a new year, heavenly trumpets will sound in the realm of the Spirit. May Israel hear YHVH’s love call to wake up, prepare for judgment and the coming of our King. “O God, would You give us a government that is not staunchly resistant to Messiah, through which You can move to achieve victory over Your enemies, in a manner that glorifies You. We praise and thank you that Your ways are greater than ours, loving and perfect.”

* Most conservative and liberal rabbinic scholars agree the calendar dating system is not properly aligned with the date of Creation and could be mistaken by hundreds of years.

Your ticket for the: Tuesday’s Israeli Election