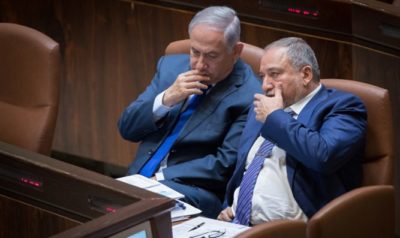 Israeli politics have drawn world attention this week. The votes have been counted and many are congratulating Benjamin Netanyahu and the Likud party for his record-setting 5th term as Prime Minister. In fact, however, Mr. Netanyahu has not been appointed prime minister—as least not yet. We write this article to help clarify the process of securing the position of prime minister and suggest how to pray. This Passover – Resurrection season, the complex political situation could result in a shift in government that could open doors to the Gospel in Israel as never before.

Israelis do not vote for their Prime Minister. In truth, we do not even vote directly for the 120 members of the Parliament, called the Knesset. Instead, Israelis cast a single vote for a political party.

The parliamentary electoral process is carried out through a proportional representation system. This means the number of seats a party gets in the Knesset is proportionate to the number of votes it gets nationwide. To win an initial seat, a party must garner 3.25 percent of the national vote. If it does not, that party is not represented in the Knesset. If it does, the number of seats it wins is determined after all votes are counted. If it wins 25 seats, the first 25 names on the party’s list of potential members become members of the Knesset. The actual list of potential Knesset members is determined by party primaries wherein only dues paying party members can vote. So, in reality, in the only democracy in the Middle East, most citizens are not involved in directly selecting any government leaders.

After the elections, the President of Israel, (who himself is not elected, but rather appointed by the Knesset) surveys the landscape of newly elected Knesset members and parties based on political ideologies. Then he determines which like-minded parties have the best chance of coming together to form a government. The President chooses as Prime Minister the party head he believes to be most capable of forming a government. To form a government, the future Prime Minister must put together a coalition of at least 61 out of the 120 members of Knesset, or a simple majority within a 6 week period. If he cannot, the President extends the opportunity to another potential Prime Minister.

How Will the New Coalition Form?

As a result of the recent elections, political parties can be separated into three groups of natural allies: (1) right wing, (2) center-left, and (3) Arab. As of now, the Right wing bloc that could potentially form a Likud led coalition consists of Likud with 36 seats, Shas 8, United Torah Judaism 7, United Right 5, Yisrael Beitanu 5, Kulanu 4. The Center – Left includes Blue and White 35, Labor 6, Meretz 4, and the two Arab parties Hadash -­ Ta’al and Ra’am -­ Balad have 6 and 4 seats respectively.

To simplify, assuming these two groups of natural allies, right and center – left, cluster together, the right wing ends up with 65 seats, center -­ left with 45, and Arab parties, 10.

This alignment would appear to give Mr. Netanyahu the best chance, of all potential contenders for the premiership, at forming the next government. Therefore, President Rivlin is expected to give him first opportunity to do so. However, since Netanyahu only has 4 more seats than needed to govern, he needs every right wing party except Kulanu to stand with him. If the secular right wing party Yisrael Beitanu, headed by Avigdor Liberman, keeps its 5 seats outside the coalition, which it still threatens to do, there is no right wing coalition that Netanyahu can form. In that case, for Netanyahu to be able to govern, he would need to find another seat from outside the right. This other seat would not come from Labor or Meretz. They represent the extreme left and have no common ground with Netanyahu. It is also unlikely that an Arab party would join the coalition, as they ardently oppose Netanyahu. That leaves Blue and White as the only party that could complete a Netanyahu-led coalition—if Liberman refuses to join Netanyahu.

A stunning result of all the above is that because of his 5 seats, Avigdor Liberman is the new wild card or “kingmaker” in Israel. As leader of Yisrael Beitanu, he will decide if Netanyahu becomes Prime Minister of an ardently right wing bloc, or whether he needs to partner with and rely on Blue and White, the party he has fought against the past 3 months.

Liberman has served under Netanyahu as both Foreign Minister and Defense Minister. One might think he would quickly join the Netanyahu fold. However, he has refused to join Netanyahu’s coalitions when he was not given what he requested in terms of position or policy. Quite significantly, he resigned as Defense Minister and left the coalition last November over a harsh disagreement with Netanyahu regarding Hamas. He identifies as secular-right Zionist and is seen as hawkish. Liberman does not have much tolerance for political correctness or compromising his principles.

Last year, Liberman authored a military conscription bill compelling the ultra-Orthodox (Haredim) to serve, like all other Israelis, in the country’s armed forces. The Haredim violently opposed the bill so it did not pass. This left the government in a standoff which resulted in its collapse. Liberman, as recently as yesterday, gave Netanyahu an ultimatum: pass the military conscription bill or he will not join the coalition. So, if Liberman joins a coalition with the Haredim, it would be a tenuous marriage that could implode at any time.

An important consideration is that if Liberman joins the coalition, this could bode well for Israeli Messianic Jews. Liberman strongly opposes the magnitude of Haredi influence in matters of religion and state. He disagrees with their highly restrictive views as to who is sufficiently Jewish to qualify for Israeli citizenship or other civil “rights.” Liberman has implied that, in addition to the Defense Ministry, he could opt out of the coalition unless his party is also given control of the Interior Ministry, historically under ultra-Orthodox control. Were he to exact control of the Interior Ministry, this could make it easier for Messianic Jews to make aliyah. It could challenge the anti-Christ/anti-Messiah stronghold in the government.

Liberman, however, may not join Netanyahu’s coalition. In that event, Netanyahu would have no choice but to turn to Blue and White, led by Benny Gantz. This party consists of former generals, defense ministers, and finance ministers who have served well with him before. Unfortunately, during his re-election campaign, Netanyahu badmouthed them to such an extent it seems he has totally alienated them. Blue and White leaders have said they would never serve again in Netanyahu’s government. But politicians have been known to change their minds.

Were Blue and White to join Netanyahu, the extreme right and religious parties would no longer be needed in his coalition, causing the government to move from heavily right towards the center. Israel could still be hawkish on security matters, while liberal on social, religious, and economic issues. Such a scenario would challenge the power of ultra-Orthodox parties and the anti-Messiah stronghold they enforce. For this to occur, however, both Netanyahu and Blue and White would have to compromise in ways they have not yet seemed willing. President Rivlin could try to force them to compromise if a stalemate results that would otherwise require another national election.

In the next 24 hours President Rivlin is expected to ask Netanyahu to form Israel’s next coalition government. So now is the time to contend with us in prayer for:

May your Passover and Resurrection Day celebrations bring you renewed freedom to both serve and soar in the Risen Lamb of God!

Your ticket for the: Passover – Resurrection Transition: Israel’s Government Will be on His Shoulders