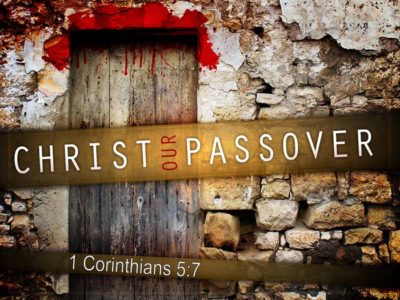 The biblical feasts of Passover and Unleavened Bread are just days away, falling this year on April 10-17. Here in Jerusalem, holiday excitement is in the air.  Meticulous pre-Passover housecleaning is dwindling to its final sweep of leaven from homes and businesses. Shoppers scurry through streets in last minute preparation for the upcoming, ceremonial meal (seder). Jerusalemites are in a happy mood – despite the high terror alert currently in effect.  Refreshed by the vibrant colors and fragrance of spring, we sense, consciously or unconsciously, God’s breath on us.

You may not live in Jerusalem, but you can nonetheless profoundly encounter the Lord through the Passover. This unique feast is a joyful celebration, somber commemoration and expectant supplication, all rolled into one annual event. Its message of redemption is universal. The holiday is so significant that Yeshua (Jesus) told His disciples it was “with fervent desire” He wanted to celebrate it with them. (Luke 22:15)

At Passover we recount and personally engage with the bittersweet story of the biblical exodus. We re-live the event, especially through the seder. For a week we eat unleavened bread, as did our ancestors when freed from bondage. We rejoice over our redemption, but at the same time await its even greater fulfillment in the age to come. We partake of communion in its original context of intimate table fellowship with Yeshua.  We celebrate His death and resurrection. At its essence, Passover is about kingdom conflict and triumphant Love.

Today, kingdom conflict rages around the world. Whole populations are oppressed by anti-God forces similar to those which drove Egypt’s pharaoh to enslave the Israelites. Observance of Passover can, therefore, sustain and empower you for today’s kingdom conflict – as it has for the Jews for millennia. It can also serve as a powerful intercessory prophetic act,* releasing triumphant Love. Here are 5 reasons why and how.

2. God designed the observance of Passover as a type of intercessory watch. “Because the Lord kept vigil that night to bring them out of Egypt, on this night all the Israelites are to keep vigil to honor the Lord for the generations to come.” (Exodus 12:42, NIV) The Hebrew word for “keep vigil” means to watch, guard, hedge about, protect, keep, preserve. It comes from the same root used in Isaiah 62:6-7: “I have posted watchmen on your walls, O Jerusalem; they shall never be silent, day or night. You who call upon the Lord, give yourselves no rest, and give Him no rest, til He establishes Jerusalem and makes her the praise of the earth.” It is the watchmen’s role to petition God concerning what they watch. Because Passover is a vigil or watch, it is an occasion for intercession.

3. The Passover seder is rich with prophetic symbolism beautifully pointing to Yeshua. As a result, the liturgy of the holiday meal can easily escort us into His presence. In this context praise, worship and intercessory prayer often naturally flow.

Each of the food elements at the seder can be partaken as intercessory or prophetic acts for the full redemption, salvation and restoration of God’s covenant people. (Exodus 12:8, Numbers 9:11) So it was quite appropriate, in the intimacy of table fellowship with His disciples, for Yeshua to identify His body and blood with Passover’s unleavened bread and wine. First Corinthians 11:26 says the act of communion declares Messiah’s death until He comes. Communion itself is, among other things, a prophetic act.

Because Yeshua identified His blood with the Passover wine, we have felt led at times to apply drops of wine to the door posts of our home as an intercessory prophetic act. We have even applied a few drops to a map of Israel, petitioning God to keep watch, protect and save our country by the blood of the Lamb. We are not superstitious about the inherent properties of wine, but we do believe God responds to our faith and heart cries.

4. The prophet Ezekiel says that Passover will be observed during the Messianic Age after Yeshua returns. He describes sacrificial offerings in a glorious, holy temple so large it could not possibly fit in present day West and East Jerusalem. (Ezekiel 45:21-24) Our observance of the feast in this age can be seen, therefore, as a prophetic act toward that glory which is to come.

5. Events that underlie Passover foreshadow some of the events that will unfold during the end times. The harsh Egyptian pharaoh, for example, was a type of anti-Christ who brings trial and tribulation to God’s people. God eventually judges the pharaoh and all Egypt. At the same time He protects His own, completely sparing them from the outpouring of His wrath. In the end, all who take shelter under the blood of a lamb are saved. For them, new life in a new, promised land lies ahead.

When you and I celebrate the Passover, we are strengthened for kingdom conflict and victory. We may or may not personally experience the period of time some call the Great Tribulation. But as we actively identify, generation to generation, with God’s exodus redemption of the past, we can position ourselves – and others – for Love’s triumph in the present and future.

*Prophetic intercession can be defined as the combined ministry of the priest, pleading the needs of the people to the Lord, and prophet, pleading the [desires, purposes or commands] of God before the people. (James Goll, “The Power of Prophetic Intercession,” http://www.identitynetwork.net/apps/articles/default.asp?articleid=37456&columnid.) Sometimes, prophetic intercession is expressed through specific acts as well as words, as in Ezekiel 4 and 5:1-4 or more commonly, through blowing a shofar or anointing with oil when the Holy Spirit leads.

Your ticket for the: Celebrating Passover as a Prophetic Intercessory Act