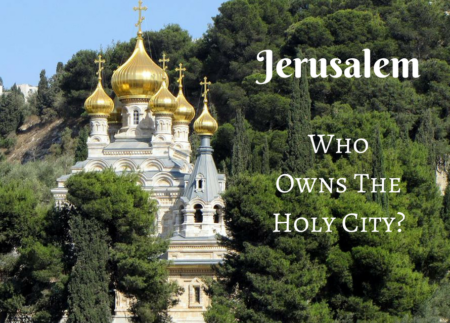 To the surprise of many, Christians own most of the wealthiest parts of Jerusalem. Despite global focus on the Arab-Jewish controversy, traditional churches hold title deed to large swaths of real estate here. The Prime Minister’s and President’s Residences, Knesset, Israel Museum, King David Hotel, Great Synagogue, Mamila Mall and much more, are all built on lands leased by Israel in 1952 from the Greek Orthodox Patriarchate.* These leases expire in 2051 — and nobody knows quite what to expect after that. Russian Orthodox, Catholic, Anglican, Ethiopian and other churches hold title to other large parcels of real estate. Most of these denominations adhere to replacement theology and align more with Palestinian than Israeli believers.

There’s more. In recent years, many evangelical ministries awakened to God’s heart for Israel have purchased buildings or apartments in Jerusalem in large numbers. Some of these properties are vacant or nearly vacant much of the time. Nevertheless, they’re significantly changing realities on the ground. Collectively, Christian ownership of real estate in the city is chipping away at the notion of Jerusalem being the “eternal capital” of a Jewish state.

Unfortunately, due to international restrictions on building, every property purchased by foreigners from abroad diminishes the Jewish population and character of this city. When Christians buy homes or buildings in Jerusalem, their nation automatically increases its particular stake hold here. This in turn contributes to the Palestinian and Islamic propaganda that Jews possess no legitimate, governmental claim to Jerusalem. Meanwhile, international purchases have helped drive property values so high that most Messianic residents have been forced out of the city. Virtually none can afford to own a home in Jerusalem. Very few of us can rent.

Christian land or homeowners in Jerusalem rarely intend to cause collateral damage of this nature to their Jewish brothers and sisters in Messiah. Yet, some Israeli believers see a subtle expression of replacement theology in the increasing, Christian internationalization of Jerusalem. To the extent many or most Messianic Jewish Jerusalemites have already been replaced by Gentile Christians, it is hard to deny some similarity. One Messianic Israeli has called the phenomenon “spiritual colonialism,” albeit due more to ignorance than evil intent.

A recent, secular expose* on land ownership in Jerusalem rightly concludes that ultimately everyone — and no one — owns Jerusalem. It is the City of the Great King. But precisely for that reason, believers who support Israel’s last days restoration would do well to remember the key role Messianic Jews must play in Jerusalem for the Great King to return, rule and gloriously reign. (Matthew 23:37-39) That’s for the good of everyone. “Pray for the peace of Jerusalem.” (Psalm 122:6)

Your ticket for the: Who Owns Jerusalem? (Probably not who you’d think.)