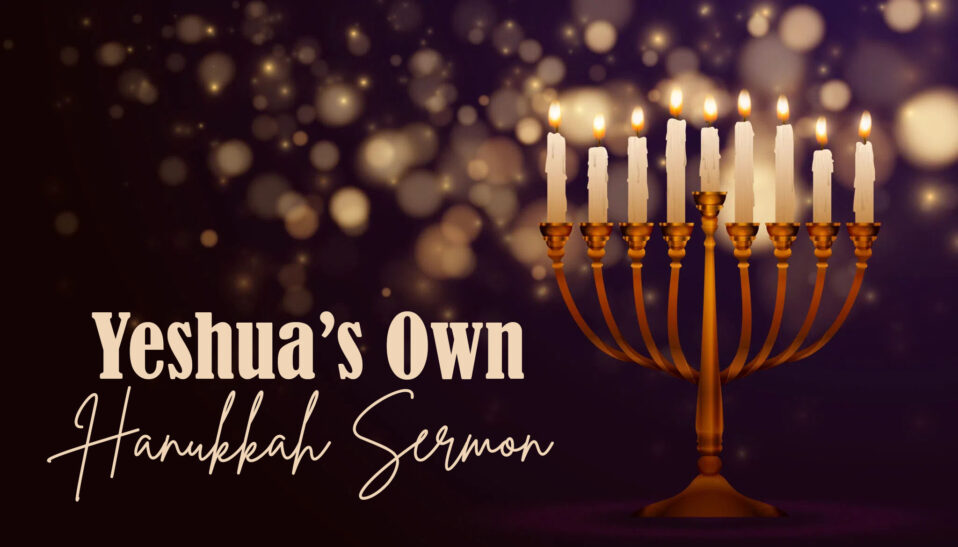 Did you know Yeshua preached the most electrifying Hanukkah sermon ever and the Bible records it for us? Hanukkah (Feast of Dedication) is celebrated annually on the 25th day of Kislev, the 9th month of the biblical calendar. This year the holiday overlaps with Christmas, starting the evening of December 18 and ending the evening of December 26.  Many of you know that John chapter 10 recounts that Yeshua observed Hanukkah in Jerusalem. You may not know, however, that same chapter also contains the most exhilarating Hanukkah sermon ever preached.

For those not familiar with Hanukkah, the holiday celebrates the recapture and re-dedication of Israel’s Second Temple upon the Jews’ miraculous victory, circa 165 BC, over the Greek emperor-king, Antiochus IV. This evil ruler outlawed the worship of YHVH, severely persecuted the Jews, desecrated their Temple and set himself up as God. He is widely viewed as a prefigure of the end times Antichrist. Antiochus IV’s rise to power over Israel was made possible, and preceded by, a great falling away from faith of God’s people. Conditions leading to the original Hanukkah are strikingly similar to those of our day. Sadly, many today are falling from biblical faith and antichrist strongholds are mounting in force. But at the same time, God is raising up a remnant of His people in what we could call a spirit of Hanukkah and revived “Maccabee mantle.”

The Maccabees were a family of Jewish priests that served in the Temple during the reign of Antiochus IV. Trusting in YHVH, they refused to worship the demonized king or any other god. Untrained in military battle, they nevertheless rallied and led a small company of Jews to miraculously defeat the highly skilled armies of Antiochus IV. They recaptured the Temple, cleansed it and rededicated it to YHVH in a joyful, eight day celebration. Today, our struggle is not against flesh and blood, but against rulers, powers, and world forces of darkness. The Body of Messiah battles with weapons of the Spirit, as God’s kingdom is taken by spiritual force (Ephesians 6:12-13, Matthew 11:12).

Historical accounts indicate the Maccabees’ Temple re-dedication lasted eight days because it was intentionally patterned after the eight day Feast of Tabernacles of Numbers 29:12, 35. The popular and inspiring story of one day’s worth of oil keeping the Temple lamp stand, or menorah, burning for eight days is merely a legend, first described in the Talmud in Shabbat 21b. (More on this later.)

Since the Feast of Dedication is celebrated for eight days, be blessed by the eight meditations below, one for each day, from the Master’s incomparable Hanukkah sermon of John 10:22-39.

1. Hanukkah was sufficiently important for Yeshua to not only observe it, but to actually appear at the rededicated Temple (John 10: 22-23). Therefore, it is significant enough for us to observe today. If you are not ethnically Jewish, you are still invited into the rich meaning and unfolding prophetic revelation of Hanukkah. Rejoice that because you are a Gentile believer, your faith fulfills prophecy and uniquely glorifies God. You are not to try to be Jewish (or think you are). Instead, you are to bless God as a cherished member of the beloved nation into which you were born. You are to shine as a lamp stand to that nation – and to Israel.

2. The Maccabees overcame the spirit of anti-Messiah (antichrist) at the original Hanukkah, foreshadowing future, prophetic events. In the subsequent Hanukkah observance of John 10, the spirit of antichrist was again overcome—this time in the manifest revelation of the true Christ. It was not mere happenstance that Yeshua revealed His messiahship, collectively and for the first time, to Israel’s religious leaders at Hanukkah (v. 24, 33). Hanukkah can be a significant time to gain strength, by grace, to overcome the spirit of antichrist in this present age. It can also be a time of expanded revelation of Yeshua as Messiah—and therefore, a key time to pray for Israel’s salvation and deliverance from anti-Messiah strongholds.

3. Hanukkah recalls how the unbelief of God’s people eventually culminated in antichrist forces coming to power, nearly wiping them out, and banning the worship of YHVH.  A century earlier, the Jews began assimilating, slowly but steadily, into the pagan Greek culture surrounding them. Over time, a great falling away from faith took place. Eventually, widespread unbelief resulted in Antiochus IV overtaking the Temple and demanding to be worshiped as God. In v. 25-26, Yeshua convicted the religious leaders of His day of their own tragic unbelief. He warned their rejection of Him would have serious consequences, as it had many years prior. This Hanukkah, you can be renewed in the opposite spirit of unbelief. Your faith in God to stand apart from the culture of the day can be revived. Embrace the faith and spirit of the Maccabees: “I will rouse your sons, O Zion, against your sons, O Greece, and make you like a warrior’s sword” (Zechariah 9:13). Hanukkah is also a key time to pray for revival of faith among leaders of the global Body of Messiah.

4. It was on Hanukkah that Yeshua assured us no one can snatch us out of His hand (v.29). Like the Maccabees during the falling away of many, you will not be snatched out of God’s hand. You can trust Yeshua’s leadership, whatever the circumstances, and know He has your best interest at heart. Regardless of life’s difficulties and the raging of antichrist forces around you, you can rest secure in Him. He is with you to the end of the age—and beyond.

5. It was on Hanukkah that Yeshua declared to Israel’s spiritual leaders that He gives eternal life to those who follow Him (v. 28). In a perfect setup, Messiah spoke these words at the very same Temple rededicated years earlier at the original Hanukkah. To the Jewish leaders, the Temple would have represented the sacrificial system by which they sought forgiveness of sin, right standing with God and resurrection life. Yeshua’s bold claim to be the granter of eternal life seemingly contradicted all they understood. Sadly, it seems they rejected the claim and therefore, eternal life. If God’s ways at times seem to contradict what you have understood in the past, you can trust those ways are greater – and better than your past understanding. He may be doing a new thing in you for this new era. It will be for a greater good than you can now imagine.

6. “I and the Father are one…the Father is in Me and I in Him…..I said I am the Son of God.”(v. 30, 38, 36)  Today, you who are in Messiah Yeshua are also one with Him and the Father. This is a profound privilege and magnificent mystery, deserving a “selah” type of pause here. Yet there is more: We who comprise the Body of Messiah are also one. At Hanukkah we are reminded of the blessing and glory of oneness. Oneness empowers us to resist Satan’s efforts to divide us. Those efforts are aimed relentlessly at God’s spiritual family. But they are aimed at physical families, too, especially inter-generationally. Recall the last sentence of the Old Covenant in the Christian Bible prophesies that Elijah will come before the great and terrible Day of the Lord, turning the hearts of fathers to their children, and children toward fathers, lest the land be stricken with a curse. (Malachi 4:6) Hanukkah is a wonderful time to pray for and pursue oneness with God, with His family by the Spirit, and with your physical family. Oneness is not only a beautiful blessing, but an essential weapon in withstanding antichrist forces. Oneness comes by grace through love.

7. “If I do not do the works of My Father, then do not believe Me, but if I do, even though you do not believe Me, believe the works” (v. 37-38). Some Bible translations use the word “miracles” instead of “works” in this passage. The more accurate translation is “works,” which includes miracles as well as courageously righteous deeds. The Jewish leaders hearing Yeshua’s Hanukkah sermon naturally associated the holiday with miracles and courageously righteous deeds. Yeshua knew this association would relate to His claim to be God. Perhaps it even brought to some leaders’ recall that Yeshua was likely conceived, and therefore incarnated, at Hanukkah – and miraculously so. (For details on this point, see lightofzion.org/biblical-feasts/the-feast-of-lights-hanukkah-and-messiahs-incarnation/) Today, you can rejoice in the reality of relationship with a miracle working God who will empower you for courageously righteous deeds. Your godly works which glorify Him are not by might or power, but by His Spirit. Believe for miracles as you embrace the spirit of Hanukkah and “Maccabee mantle.”

8. Many think of Hanukkah, sometimes called the Festival of Lights, as celebrating a miracle in which one day’s worth of oil for the Temple menorah burned eight full days. The earliest account of this event, however, dates to about 600 years after it supposedly occurred, or almost 400 years after the New Covenant was written. The historical Apocrypha, in the Books of the Maccabees, recounts the original Hanukkah in much detail, but does not mention or hint at an oil miracle. Bible scholars agree this lack of reference in Scripture or any other ancient writing means it probably never occurred. Whether or not the oil miracle took place, be blessed this Hanukkah that Yeshua is the light of the world and light of your life. He will keep holy fire burning in you through the fullness of time, even as you battle the darkness of this age. “You, Lord, keep my lamp burning; my God turns my darkness into light” (Psalm 18:28). May His glory light shine brightly on you and through you, like a “Maccabee mantle,” at this special season!

Your ticket for the: Yeshua’s Hanukkah Sermon: 8 Meditations for 8 Days