RECOGNIZING JERUSALEM: HAS THE ZECHARIAH 12 BATTLE BEGUN? A Call To Prayer That Ensures Victory 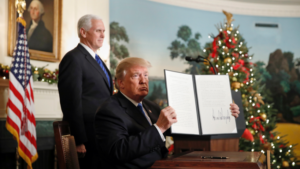 On May 14, 1948, Zionist pioneer David Ben-Gurion delivered Israel’s Declaration of Independence and declared the establishment of a Jewish state. Jews and evangelical Christians around the world rejoiced. But while crowds danced in the streets, the esteemed Ben-Gurion stayed in his office. There he pored over maps showing the array of Arab forces poised to imminently attack the Jews.

That night, Israel’s founding father wrote in his diary: “I feel like a mourner at a wedding.” [i] Ben-Gurion’s words describe well my reaction to President Trump’s recognition of Jerusalem as Israel’s capital. I believe President Trump did the right thing under difficult circumstances. I am not, however, giddily happy about it. At least not yet.
Admittedly, my judgment is clouded by my perspective as a Jewish, dual American-Israeli citizen, Zionist, Bible believer, attorney, author-commentator on Israeli affairs, resident of Jerusalem and dedicated intercessor who loves the Lord. As such, I’ve learned that realities pertaining to Israel are highly nuanced and complex. Therefore, I am strongly urging believers to consider some of the less discussed implications of Trump’s announcement for the critical purposes of prayer. Like Ben-Gurion, I see a battle map, but in the Spirit.
And like our Zionist forbear, I believe God will be with us in the fight.
Now is the time for Israel loving believers to mobilize, “not against flesh and blood, but against rulers, authorities, powers of darkness and forces of evil in heavenly realms.” (Ephesians 6:12) I believe 8 key issues emerge as vital prayer points after Trump’s announcement. 8 happens to be the number symbolic in Scripture of new beginnings, and US recognition of Jerusalem is certainly a new, good beginning.
1. President Trump has courageously aligned the United States with God’s Word concerning Jerusalem—to a limited but significant degree. Breaking with fruitless precedent, he recognizes honest realities on the ground, together with Jewish historical and moral claims to Jerusalem. Hindsight will reveal the wisdom of Trump’s timing. Meanwhile, only God knows his true motives; we should be quick neither to attribute all to political posturing on one hand, nor fervent faith on the other. In any case, we should pray for the release of God’s blessings on President Trump and the US for aligning with His Word. Pray that other nations take note of this blessing and shift their alignments, too. (Genesis 12:3)
2. The text of Trump’s announcement is silent on the issue of Jerusalem’s borders. Nothing in the speech rules out dividing the city. A Muslim capital in East Jerusalem, with the al-Aqsa Mosque and Dome of the Rock perched atop the Temple Mount, is still possible. [ii] We must continue to pray that Jerusalem not be divided, especially at the future behest of the United States. Pray that Trump’s recognition will not be used to deceive Israel into any future compromise of God’s purposes for Jerusalem or the Land. (Joel 3:2)
3. Trump has merely refused to repeat the nonproductive fallacy of previous US administrations that waived Congressional laws regarding the capital of Israel. Rather than change the law, he is the first president bold enough to adhere to American law. Pray for his protection. Ask God to give him divine wisdom and godly counsel in coming days, months and years. (1 Tim. 2:2, Jer. 29:7) 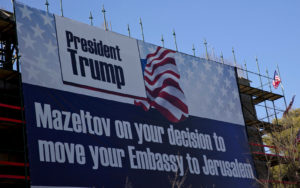 Your ticket for the: RECOGNIZING JERUSALEM: HAS THE ZECHARIAH 12 BATTLE BEGUN? A Call To Prayer That Ensures Victory

RECOGNIZING JERUSALEM: HAS THE ZECHARIAH 12 BATTLE BEGUN? A Call To Prayer That Ensures Victory