Last week we had the joy of participating in a reconciliation summit focused on healing spiritual wounds from the ancient breach between the two mothers Sarah and Hagar. Arab, Jewish and international prayer leaders came together in an amazing level of unity. We committed to surrender to the leadership of the Holy Spirit for our time together. With sincere love among us, we were graciously given fresh revelation and prayer strategy.

At the outset, God spoke to my heart that He does not regard Ishmael primarily as a redeemed mistake. There is much more than we think we know to the story. For perspective, consider that Jacob had twelve sons. They became the patriarchs of the twelve tribes of Israel. Four of the twelve, however, were not born to Jacob’s wives Leah and Rachel. At the wives’ jealous insistence, Jacob had impregnated both their maid servants. Thus, Dan, Naphtali, Gad and Asher were born to Bilhah and Zilpah (Genesis 30). Yet Scripture treats these four sons of Jacob as full members of the family. They help comprise the household of Israel. Never does Scripture regard them as mistakes.

Now, in God’s plans, Ishmael was not to inherit His covenant with Abraham; Isaac would. But, somewhat like the sons of Bilhah and Zilpah, Ishmael was to be regarded as an important member of Abraham and Sarah’s family and household. He was to follow the ways of YHVH, receive great blessing, and spawn kings of nations. That is why, when Hagar tried to run away with Ishmael in her womb, the Angel of the Lord stopped her. Sadly, it seems Hagar never fully surrendered in her heart to God’s covenant plans. Nevertheless, she received the honor of becoming the first woman in Scripture, since Eve, to personally hear Him speak.

Consider that Sarah had lived a mostly shamed life for never having had a child. Adding to her shame, no doubt, was Abraham’s denial before kings that she was even his wife (Genesis 12:11-19; 20:1-2). Meanwhile, unlike Hagar or Abraham, Sarah never heard directly from God — which may have contributed to her lack of faith for a biological son. Still, imagine her delight when Ishmael was born. According to the custom of the day, she could love and raise him as her own, and the presumed child of promise.

Now imagine how everything would have changed when Isaac came along. Contention in the house grew so bad that Sarah perceived (probably rightly) that his covenant inheritance was at risk. Pain shattered everyone’s heart: Ishmael, Abraham, Hagar, Isaac and even Sarah herself. (What mother could raise a child for 13 years, then think to abandon him, without great heartache on her part?) Yet God affirmed it was time for Ishmael and Hagar to go. He Himself would ensure His promises to Ishmael were fulfilled.

Years later, according to traditional rabbinic teaching, the two brothers reconciled. This they infer from the fact that Isaac and Ishmael buried their father together, without mention of Abraham’s many other sons. (Genesis 25:9) We can hope the rabbis are correct. 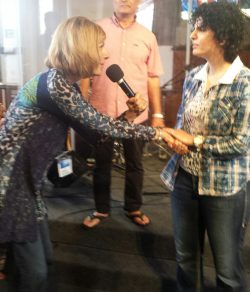 In any case, our heavenly Father is one who heals. We watched Him begin to expose, soothe and restore ancient wounds between mothers Sarah and Hagar, passed to Isaac and Ishmael, then down to their children. In this photo, Sandy and a dear Israeli Arab leader in the Body of Messiah embrace each other in heartfelt intercessory repentance and realignment as one step in the process.

As God revealed and began healing these wounds, He also exposed the need for healing between male and female in the Body of Messiah. For the first time, we personally heard some of our Messianic Jewish Israeli brothers acknowledge the need to release Messianic Israeli women into their full biblical gifts and callings. May we all surrender to God’s heart and Word in humility and wisdom in navigating this sensitive issue. 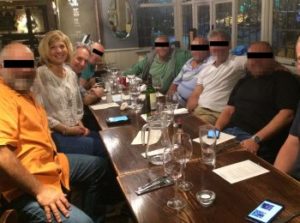 One of many other highlights of the prayer summit in England was amazing table fellowship with Arab brothers from Egypt, Assyria and elsewhere. Some face serious persecution for their faith. For their safety we have covered or blurred their sparkling eyes and smiles in this photo. As we ate together, familial love was strong from the outset. Interestingly, all the Arabs there said they felt Israel has a right to exist as a Jewish state. That one issue resolved, we felt like participants in a long overdue family reunion — in which practically nothing had to be held back. Together we shared heart to heart, laughing in pure joy for hours. Perhaps we even took a step toward the prophetic day when a highway of worship extends from Egypt through Israel to Assyria. (Isaiah 19:23-25) May that time come quickly!

Your ticket for the: Arab-Israeli Reconciliation: Important New Stride