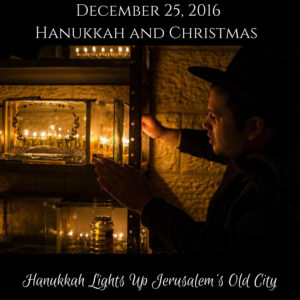 In a few days Hanukkah and Christmas will both fall on December 25.  Jews around the world will usher in the Festival of Lights as Christians celebrate the Light of the World. Often the two holidays coincide because Hanukkah is an eight day commemoration. But this year’s convergence of Christmas with the first day of Hanukkah is a rarity. As such, could it underscore a unique opportunity for the Body of Messiah to live out – and offer the world – a breakthrough testimony of Him? United in the love of Yeshua (Jesus) as one new humanity, is it possible believers could give Israel and the nations a unique witness to the power of the Gospel at this unique season? (John 17:22-23, Ephesians 2:15)

Hanukkah (literally, “Dedication”) is a non-Levitical holiday also known as the Festival of Lights. It is mentioned briefly in John 10:22-23. Three years ago, Hanukkah coincided with American Thanksgiving in a similar, but less global, calendar convergence. The day was humorously labelled Thanksgivukkah. This year, Hanukkah and Christmas do not lend themselves to a similar word play. Some would take offense at Chrisukkah; the alternative moniker, Hamas, obviously won’t work either.

The Hanukkah Story: Historic and Prophetic

The original Hanukkah dedication was a rededication of the Second Holy Temple in Jerusalem. The story is recorded in the historical apocrypha, 1–2 Maccabees, and by Josephus, Antiquities of the Jews. To summarize, Israel had lapsed into a long period of spiritual decline when she was overrun in the second century BC by the Seleucid emperor, Antiochus IV Epiphanes. The crazed conqueror erected a statue of Zeus in the temple and demanded it be worshiped. Among other murderous abominations, he had a pig sacrificed on God’s holy altar. Sadly, most Jews complied with his devilish demands. But one family of faithful priests, the Maccabees, revolted. They organized a small military band that miraculously defeated the armies of Antiochus IV Epiphanes.

Hanukkah celebrates the Maccabees’ victory, culminating in the rededication of the temple on the 25th day of the Hebrew month of Kislev in 164 BC. (Not coincidentally, the statue of Zeus had been erected three years earlier on the same day of the same month.) Some scholars believe that, on the original Hanukkah of 164 BC, Kislev 25 coincided with what would become December 25 on the Gregorian calendar. In any event, historical legend states only one day’s worth of oil could be found with which to light the holy lampstand for the rededication on Kislev 25. The oil burned miraculously, however, for eight full days. Thus Hanukkah became an eight day holiday.

Antiochus IV Epiphanes (meaning “Manifest God”) is regarded as an anti-Christ figure or foreshadow by many Bible scholars. To be sure, some of the anti-Christ prophecies of Daniel chapters 7-12 find various levels of fulfillment in Antiochus IV Epiphanes. But there is another important connection between the defeat of the anti-Messiah spirit and Hanukkah, relating to Christmas. Had the Hanukkah victory of Kislev 25 never taken place, and had Israel been wiped off the map, Messiah might never have been born. It is probably no coincidence, therefore, that according to Scripture, Yeshua was likely conceived in Mary’s womb on or about Kislev 25.

The reference point for this date of the Incarnation starts with the conception of John, born to Mary’s cousin Elizabeth, and her husband, Zechariah. John was conceived after the angel Gabriel encountered Zechariah during his priestly duties in the Temple. Zechariah was likely serving according to the priests’ rotation schedule of 1 Chronicles 24-28. He belonged to the family division of Abijah, so he would have finished serving and gone home to Elizabeth in late June or early July. (Luke 1:5, 13-19, 23-26)  A few months would have gone by. Then, by the time Mary visited Elizabeth, Elizabeth was six months pregnant with John. At the visit, Mary herself had just become pregnant. By this reasoning, Messiah would have been conceived at or around Hanukkah. (He would then have been born at or around the Feast of Tabernacles).

If the Incarnation did take place at Hanukkah, which commemorates Israel’s deliverance from the anti-God/anti-Christ spirit, then YHVH has given us yet another indication of Yeshua’s messiahship. And if that is so, then He intended the holidays of Hanukkah and what is known as Christmas to coincide. This year’s calendar convergence would be no coincidence.

Every Bible based, historical holiday celebrates the unchanging character and nature of God. At the same time, every historical holiday marks a unique phase, or progressive event, of redemption history. That is why Hanukkah and Christmas, which represent different historical events and phases of redemption history, both celebrate the Light of the World. But there is more. The two winter holidays complement each other. Hanukkah serves as back story to Christmas. Christmas amplifies the meaning of Hanukkah. Neither holiday can be fully understood, appreciated or celebrated apart from the other.

Certain circumstances surrounding Hanukkah and Christmas can even be seen as prophetically parallel. Hanukkah highlights the miraculous preservation of the people through whom redemption of all humankind, by the Redeemer Himself would miraculously come. After He comes, He is dedicated to God inside the temple that was rededicated (actually, to Him) at Hanukkah. The birth and dedication of our Redeemer and the restoration/rededication of the temple both take place during murderously dark periods of Jewish history. Both events are preceded by genocidal attacks at the hands of anti-God/anti-Christ rulers. In both instances, ruling powers are overcome by humble, faithful individuals. God is victorious and prepares the way at both Hanukkah and Messiah’s Incarnation for the next phase of redemption.

If God used mere, humble and faithful individuals to keep history on His intended course in the past, could He do so in the present and future? Might such individuals include you and me? If so, might He be giving us such an opportunity this Hanukkah/Christmas? Is the upcoming convergence of calendar dates something He could use to draw Jews and Gentiles in Messiah closer to Him and each other – and as a witness to the world?

YHVH is maturing His people as one new humanity. He is preparing and refining us for the next phase of redemption history, His glorious return. Part of that preparation is our expression to Israel and the nations of the Gospel, the good news of His redemptive love. I believe December 25, 2016/Kislev 25, 5777 could serve as a turning point in our corporate expression and testimony, even to eternity.

In my lifetime, I have seen tremendous change in the Body of Messiah. As a religious Jew growing up in post-World War II America, I could neither celebrate nor ignore Christmas. Every year, the local public school system required that I actively participate in Christmas assemblies and festivities. Perhaps if my particular school did not also foster a culture in which I was accused of, and beat up for, being a “Christ-killer,” I might have at least enjoyed the forced absence from classroom work. But that was not the case.

In my perception, Christmas remained that dreaded time of year when Gentiles tried to make me worship three gods (Father, Son and Mother Mary) and, for some reason, a tree. To top it off, the annual ritual took place, of all times, on or around Hanukkah. Hanukkah was when we Jews were reminded of the courageous faith of the Maccabees. They were to be our role models.

But unlike the Maccabees, I was afraid to resist the ruling authorities of my little world.  Annually, I felt shamed before God in failing to confront what I perceived to be idolatry, shamed in being different (namely, Jewish) and shamed for having a problem that none of my classmates had. It was vexing and confusing. So confusing that, at one point, I actually wondered if my unMaccabee-like surrender to Christmas was the reason Santa never visited me!

Thankfully, times have changed. Most Christians understand better how to relate to Jews, whether or not those Jews follow Yeshua. Many Gentile believers embrace their biblical, Hebraic roots of faith, including Hanukkah. Christmas is celebrated (if at all) less and less as the actual day of Messiah’s birth. More and more, it is a day to remember that God clothed Himself in dust to redeem humankind. Among committed Bible believers, the past focus on material gifts is shifting to The Gift. Globally, the Body of Messiah is maturing.

Here in Israel, more and more nonOrthodox Jews tour Christian areas of the country at Christmastime to enjoy the holiday music, food and decorations. Many of them also want to hear the story of Christmas. Many secularized Western Jews find the traditional Christmas spirit heartwarming. For most, Christmas is no longer a dreaded time of year. (As for me, God reworked my own mind and heart about the holiday soon after I came to faith in Yeshua.)

YHVH is doing something on earth not done since New Testament times. He is refining Gentile and Jewish followers of Messiah around the world as one new humanity in Him. This Christmas and Hanukkah, why not participate – in integrity – in the move of His Spirit? Embrace the biblically Jewish identity of your Savior and roots of your faith. Express your full biblical heritage in the uniqueness of your own national, personal and spiritual identity. If you celebrate Christmas, remember Hanukkah too. If you celebrate Hanukkah, do it with joy and praise for Messiah’s incarnation and birth. For Hanukkah’s Light, the Light of the World, has come!

Your ticket for the: Hanukkah and Christmas Convergence Celebration