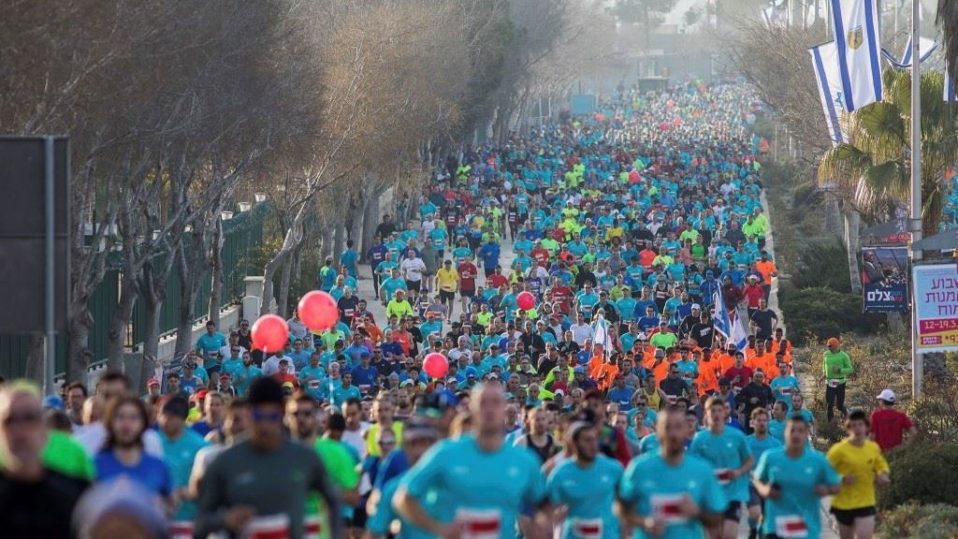 Today was Jerusalem Marathon Day, an event that drew 30,000 runners and almost as many spectators. We learned a few days ago that our home was along the planned route, so we looked forward to watching out the window.

I should have anticipated that in Israel, a marathon of this magnitude would resemble a military operation. My first clue came at 5 am with the sudden roar of what sounded much like a race car speedway (apparently to clean and prep the streets). Next came the relentless whipping of low hovering police helicopters. Attempting to drown them out, amplified music filled the air, a cross between “Battle Hymn of the Republic” and 1950’s Zionist pioneer tunes. Ear-piercing police orders and shouts punctuated the entire cacophony. (Armed officers had come from across the country for security purposes.) I admit it, I was momentarily annoyed. But then the Holy Spirit changed the scene. I’d forgotten that in Jerusalem, even a runners’ marathon is holy.

Instantly I “saw” a heavenly grandstand of witnesses praying and fervidly cheering us followers of Yeshua (runners) in the streets of Jerusalem. The “marathon” was our life of service to Him. The high pitched excitement swirling in the earthly city this morning did not compare to the tangible encouragement released from this heavenly “cloud.” The reason they cheered for us is that the Father Himself is passionately cheering you and me on!

You are running a grand race. Never are you alone in it. There are many more for you than against you. The heavenly host is crazy-happy when you succeed. In God’s Kingdom, that does not mean being first, according to the clock, to cross the finish line. It means persevering in faith to cross the finish line marked out for you, in His timing. If you stumble along the way (and every runner does) His grace will lift you up. Just cross, for the Cross!

“Since we are surrounded by such a great cloud of witnesses, let us throw off everything that hinders and the sin that so easily entangles, and let us run with perseverance the race marked out for us. Let us fix our eyes on Jesus, the author and perfecter of our faith.” (Hebrews 12:1-2)

Your ticket for the: Yesterday’s Jerusalem Marathon and a Brief Heavenly Encounter