Tisha b’Av: Mourning Destruction of the Temple in Light of a “New and Living Way”

The Jewish observance of Tisha b’Av (translated “9th day of [the month of] Av”) falls this year on August 13-14.  Marked by fasting, prayer and Scripture readings, Tisha b’Av is considered the saddest day of the year. This is because on precisely Av 9, devastating calamities have befallen the Jewish people through history. Here is a list of some of the worst: (1) God’s decree, according to Talmudic tradition, that Israel would not enter the Promised Land because of unbelief; (2) destruction of Israel’s First Temple in 586 BC; (3) destruction of Israel’s Second Temple in 70 AD; (4) a tragically failed Jewish uprising against Rome, resulting in 2,000 years of exile; (5) expulsion of all Jews from England in 1290; (5) expulsion of all Jews from Spain in 1492; and (6) the official start of World War I, which culminated in World War II and the Holocaust. 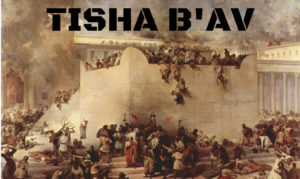 Tisha b’Av cannot be the result of random coincidence. We are forced to conclude that in certain years, God allows all hell to break loose on His people on the 9th day of Av. Some say the root of attack stems from Israel’s sin of unbelief about taking the Promised Land. (Numbers 14) Today, some Messianic Jews are repenting for their fathers’ unbelief and hope to break any resulting curse associated with Tisha b’Av. Zechariah 8:19 prophesies that someday God will transform this day (called in verse 19 the fast of the fifth month) intto a joyful feast. He is the consummate Redeemer!

Meanwhile, this coming Tisha b’Av, observant Jews will mourn the destruction of the temple with fasting and tears. Some will place sackcloth over their clothes. They will spend much of the day reading the book of Lamentations and other passages of Scripture. More and more, Messianic Gentiles around the world are joining them in these rituals. They will stand with the Jewish people in sorrow and solidarity. On Tisha b’Av and through the year, many Christians will intentionally support Jewish efforts to rebuild a third temple. Some will be more concerned about the prophetic implications of rebuilding the temple than about Jewish people coming to know their Messiah.

How can believers properly observe Tisha b’Av? Consider Hebrews 10:20: “We have confidence to enter the Most Holy Place by the blood of Yeshua, by a new and living way opened for us through the curtain, that is His body … and … we have a great priest over the house of God.”

The book of Hebrews was written specifically to first century Messianic Jews. Previously they were accustomed to the brick-and-mortar temple system of sacrifice. In Hebrews, they are given detailed revelation on the finished work of Messiah’s death and resurrection. Because of His once-for-all atonement for sin, they can now freely access the Most Holy Place by the Spirit within them. They – and we – are reminded that when Yeshua died, God ripped open the temple curtain from top to bottom. (Matthew 27:51) This signified a glorious, new accessibility to YHVH.

The temple curtain opened to us, followers of Messiah are given freedom to observe Tisha b’Av according to their conscience in the Holy Spirit.Personally, on that day I will pray much for Israel’s salvation and restoration.To be sure, I will grieve for the destructions and sufferings that have befallen my people. But I will ask YHVH to redeem the time, releasing a spirit of grace and supplication on Israel as she recalls a glory she once knew, then lost. I will remember how loved she is by her Creator/Redeemer/King and pray into the good things He has planned for her.

Your ticket for the: Tisha b’Av: Mourning Destruction of the Temple in Light of a “New and Living Way”

Tisha b’Av: Mourning Destruction of the Temple in Light of a “New and Living Way”