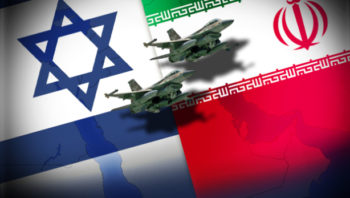 Israel launched a large scale strike against an Iranian military base in Syria early this morning, February 10. The attack occurred minutes after “a severe and irregular violation of Israeli sovereignty” by an Iranian military UAV. The UAV encroached upon Israeli airspace from Syria, shooting photographs. (https://www.timesofisrael.com/israel-launches-large-scale-attack-in-syria-after-drone-infiltration/; https://www.timesofisrael.com/israel-says-iran-syria-playing-with-fire-but-does-not-want-escalation/)

Israeli jets in Syria encountered heavy anti-aircraft fire during the raid. An F-16 was shot down and crashed. Its pilots were injured and remain hospitalized, one in serious condition. (Please pray for them.)

The past few months, God has spoken to some of us that a greater fulfillment of certain portions of Ezekiel 36 could soon unfold. Ezekiel 36 speaks much of the “mountains of Israel.” In this chapter, Ezekiel is told to prophesy redemption and restoration to the mountains, which had been usurped and plundered by surrounding nations. (verses 1-12) These mountain are known today as the West Bank and Golan Heights. The downed Israeli aircraft crashed this morning on the mountains of Israel.

We believe God desires to restore greater sovereignty over the mountains of Israel to the Jewish people in the not too distant future. We are praying for His justice, ways and means. Will a war necessarily be involved? We do not know. Although war seems quite possible, we do not hope for it! We’re believing instead for spiritual revival of Jews and Muslims in the mountains of Judea and Samaria (aka West Bank and Golan Heights). As did Ezekiel, we are decreeing concerning the mountains that “desolate places will be built up” (verse 10) and not destroyed from war. You can join us in decreeing God’s Word:

“But you, mountains of Israel, you will shoot forth your branches and yield your fruit for My people Israel … For behold, I am for you. I will turn to you. You will be tilled and sown. I will settle a large population upon you—the whole house of Israel … The cities will be inhabited. The desolate places will be built up … I will do better for you than at your beginnings. You will know that I am Adonai. … I will cause people, my people Israel, to walk upon you. They will possess you, and you will be their inheritance.” (Ezekiel 36:8-12, TLV)

When God breaks through with the Jewish people at new levels, demonic resistance often occurs. In this instance, the civil war in Syria is entering a new phase, with an Iran-Syria-Lebanon/Hezbollah axis emerging. As a result, an unofficial Iranian caliphate could soon extend from ancient Persia to the Mediterranean Sea. This anti-YHVH axis is supported in significant ways by Russia. Military analysts say it is set on a collision course with Israel.

To prevent the current situation from escalating into regional or even global war, Israel reportedly seeks to resolve three key issues. First, armed Iranian and Shiite forces near our borders must relocate. Second, Israel wants Iran to dismantle its rapidly expanding military infrastructure stationed in Syria. Third, an agreement that “whatever happens in Syria, stays in Syria,” must be enforced to prevent spillover fighting into Israel.

In our opinion, it is unlikely Israeli demands will be fully met. As one analyst stated, “Only Moscow is in a position to mediate a … de-escalation agreement.” And Russia is no true friend of Israel. (https://www.crisisgroup.org/middle-east-north-africa/eastern-mediterranean/syria/182-israel-hizbollah-and-iran-preventing-another-war-syria)

The military analyst, however, did not take into account the mediation of Israel’s King, the Lord Yeshua, and those to whom He has delegated the ministry of mediation. (2 Corinthians 5:18-19) It is said that intercessors make history. Will you petition heaven with us for mercy in this crisis? You can access dozens of strategic prayer points and relevant Scriptures to declare here.

Please pray that God’s just plans and redemptive purposes materialize in a way that causes minimal harm and destruction with maximum blessing. “The nations will know that I am Adonai – it is a declaration of Adonai – when I am sanctified in you before their eyes.” (Ezekiel 36:23, TLV).

Your ticket for the: Israel-Iran Military Confrontation and Ezekiel 36