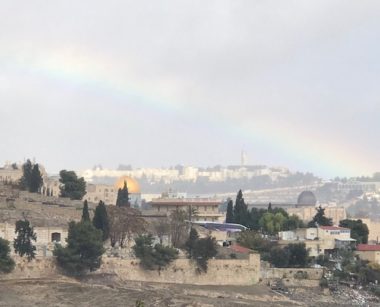 Yesterday the United Nations voted an overwhelming 128-9 to condemn the United States’ recent recognition of Jerusalem as the capital of Israel. (Hours after that recognition, I took the photo you see of a rare rainbow over Jerusalem.) The subsequent UN vote just so happened to occur on December 21, literally the darkest day of the year. It was also the day after Hanukkah, which commemorates light shining amid darkness. In light of this calendar coincidence (pun intended) some key takeaways and prayer points emerge.

First, after many years of increasingly harsh anti-Israel resolutions, the UN threw down the gauntlet not just on Israel, but the rulership of YHVH. Yesterday every nation was uniquely challenged to take a stance for or against Jerusalem, City of the Great King. (Psalm 48:2)

Second, 65 nations did not vote to condemn recognition of Jerusalem. That is mostly because they chose not to vote. Obadiah 1:11-12 speaks to nations who choose not to make choices about Israel. The prophet says God views them the same as Israel’s enemies who aggressively attack her. Now, in today’s context, only He knows the nations’ heart motives behind yesterday’s vote. For some, abstention represents a positive step in the right direction. Some are in the process of turning from goat to sheep nations, as described in Matthew 25. So let’s be encouraged to keep praying for the leaders of those nations — and others — according to 1 Timothy 2:1-4

Third, Zechariah prophetically foresaw an international attack on Jerusalem, the very early stages of which we could be experiencing today: “I am going to make Jerusalem a cup that sends all the surrounding peoples reeling. Judah will be besieged as well as Jerusalem. On that day, when all the nations of the earth are gathered against her, I will make Jerusalem an immovable rock for all the nations…” (Zechariah 12: 2-3)

If you have not yet read the actual UN Resolution, we encourage you to do so. In slightly couched terms, the nations are collectively demanding the internationalization of Jerusalem. They are also declaring null and void the sovereign, domestic law of the world’s most powerful democracy. “The US can make sovereign decisions, but only as long as they are in line with international law,” PA Foreign Minister Maliki said yesterday. In follow-up today, Turkey and Russia agreed to spearhead international opposition to the US. (This article focuses on Zechariah 12, but the alignment of Turkey with Russia, chief supporter of Iran, brings to mind warfare described in Ezekiel 38.)

Quite bluntly, the UN has told the nations to neither recognize nor relocate their embassies to Jerusalem. In its preamble to yesterday’s Resolution, that global body also calls for swift establishment of a Palestinian state based on 1949 Armistice lines. (This is done implicitly through language referring to, incorporating, or insisting on implementation of earlier, relevant UN resolutions.)

To what extent will the UN or any related coalition seek to enforce these decrees?

Faith-filled prayers based on the heart of God, offered by people like you and me, will make a difference. God has not given up on the nations or the UN! He still urges the kings of the earth to “Kiss the Son, lest He be angry with you.” (Psalm 2:12)

Below is an excerpt from our December 8 “Reflections” post. In it is a personal story with suggested directions for prayer.

“UN and other international outrage over the Trump decree exposes and betrays the existence of a globalist agenda, if any doubt remained as to whether one existed. Back in 2011, and due to “administrative error,” I attended a private debriefing on the so-called peace process at UN headquarters in Jerusalem. The highest ranking UN official at the time was Special Coordinator Robert Serry. At that meeting, Mr. Serry plainly stated (or reiterated) in no uncertain terms, that the UN had had a long standing plan for Jerusalem. He insisted this plan would be implemented, one way or another. “Everyone knows it,” he said matter-of-factly. In the future, Jerusalem would be neither Israeli nor Palestinian, but internationally controlled. The Israelis and Palestinians could kill each other over the city, but in the end, Jerusalem would come under global jurisdiction. Problem is, President Trump has just thumbed his nose at their plan, and now they’re outraged. In my perception, the root issue is not Palestinian intransigence, but “deep state” like powers and principalities in heavenly realms. Pray for nations and their leaders to waken to the fear of God and His Word, and to surrender to His saving love during this season of shifting and turning. Ask God to raise up righteous leaders and voices at the UN and before heads of states. (Psalm 2, Ephesians 6:12) Pray for exposure and dismantling of hidden schemes and traps set for leaders of nations, especially Trump, US Ambassador to the UN Nikki Haley, and PM  Netanyahu. (Psalm 141:10)

“Related to the point above is the allegation that America has violated international law in declaring Jerusalem the capital of Israel. This charge traces to UN Resolution 181, aka the Partition Plan of 1947. (The Partition Plan divided territory set aside for a Jewish homeland into two sectors, one Jewish and one Arab. The sector offered the Jews became the State of Israel. The sector offered the Arabs was rejected by them because they wanted all the land.) According to Resolution 181, Jerusalem was to be governed internationally. But here’s how God intervened:

“After the Jews accepted the Partition Plan and declared statehood, the Arabs started a war. When that happened, a confused and militarily impotent UN essentially fled the scene. Israel was left by herself to defend the Holy City. (Actually, all of Jerusalem had been set aside for the Jews in 1922, but that is another story.) So while Trump’s announcement does violate international policy, it does not violate international law—if the term “international law” is used justly, fairly and with integrity. Pray against premature works by spirits of antichrist and lawlessness seeking to change laws and seasons. (Daniel 2:21, 2 Thessalonians 2:1-12) Pray for justice at the UN, which means a revival of fair and honest interpretation and administration of righteous, traditionally based laws. Pray for more and more nations to opt out of any wrongful global agendas and recognize Jerusalem as the capital of Israel.”

The December 8 article also pointed out that Trump’s recognition of Jerusalem left much unsaid. Possibly, this could ultimately result in dividing up the Land. (For the entire article, please click here.) Benny Cohen, adviser/spokesman to former Prime Minister Yitzhak Rabin, expresses the fear some Israelis have: “The US president didn’t talk about a complete Jerusalem and didn’t even define the meaning of Jerusalem, leaving this ‘detail’ to the parties…He basically started a process to divide the city and create two holy capitals—an Israeli Jerusalem and a Palestinian Jerusalem.” (“Trump is Dividing Jerusalem,” 21 Dec 2017, YNetNews, https://www.ynetnews.com/articles/0,7340,L-5060190,00.html) Please pray with us for God’s Kingdom purposes to be realized through Trump’s proclamation. Light has been released through this president, exposing darkness on unprecedented levels. This brings opportunity for many to see and turn to their God. “In your Light, we see light.” (Psalm 36:9)

Fourth, keep in mind that Zechariah chapter 12 includes a powerful prophetic passage describing Israel’s deliverance, repentance and restoration. When the nations surround Jerusalem as a burdensome stone, God supernaturally strengthens His people. He is victorious on their behalf, leading to widespread repentance—and revival-like revelation of Messiah.

We do not believe that we are presently at the time of the ultimate fulfillment of this chapter. But we do believe we are to expectantly intercede for an extraordinary outpouring of the Holy Spirit in Israel, and especially in Jerusalem, commensurate with the level of  fulfillment God knows we are now in:

“On that day I will make the clans of Judah like a firepot in a woodpile, like a flaming torch among sheaves. They will consume all the surrounding peoples right and left, but Jerusalem will remain intact in her place….And I will pour out on the house of David and the inhabitants of Jerusalem a spirit of grace and supplication. They will look toward Me, the one they have pierced, and they will mourn for him as one mourns for an only child, and grieve bitterly for him as one grieves for a firstborn son…” (Zechariah 12:6, 10)

Be encouraged that God has heard your prayers and petitions! He is responding to your Scripture-based proclamations that release heaven on earth. So at this season, let Him fill you with fresh wind for the next, upcoming “transition” phase of labor. Then, together with us, expect to see new life birthed as never before! “For if their [Israel’s] rejection brought reconciliation to the world, what will their acceptance be but life from the dead?” (Romans 11:15)

Come to think of it, isn’t birthing new life much of what Christmas is all about? To all who celebrate Messiah’s Incarnation this December 25, a very blessed Christmas to you.

Your ticket for the: Hanukkah, Christmas and Yesterday’s UN Vote