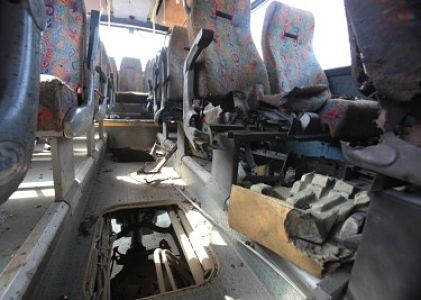 Renewed Terror: Impending War? The past two months have seen a renewed wave of terror in the Jewish State. A few days ago, Gazans fired an anti-tank missile – a weapon of warfare designed to penetrate armored tanks – at a children’s school bus in Israel, causing serious injury. This was followed immediately by intense rocket and mortar fire into Israel. On March 23, a terrorist bomb exploded near the central bus station in Jerusalem. Several dozen Israelis were injured and a Christian Bible translator killed. We heard and felt the explosion in our apartment a few miles away. Just days earlier, a Jewish family was brutally murdered while sleeping in their home in a blood-curdling terror attack that stunned the nation. Over the past few weeks more than 100 rockets have been fired from Gaza into Israel. Israeli armed forces have also come under increasingly hard and direct attack from Gaza. In support of the terrorists, millions of Muslims, Arabs, and Israel-haters around the world are calling for a third intifada (violent uprising) against the Jewish state next month. No country on earth should be forced to endure such acts of war without militarily defending its citizens. Please pray for protection from terror within Israel. Pray for Israel’s leadership to receive and operate in godly wisdom in response to these attacks. If war is necessary, pray for minimal casualties. Pray against a third intifada. Pray that Israeli believers will stand firm against the spirits of Islam, fear and intimidation. (2 Kings 6:16)

A New Battlefront. The Israeli Navy recently intercepted and seized a ship stockpiled with Iranian weapons on its way to the terrorist Hamas government in Gaza for use against the Jewish state. The world has astonishingly ignored this critical event. Sadly, the Mediterranean Sea threatens to become a battlefront for enemy attack. Please pray for supernatural wisdom and intelligence for those charged with the naval defense of this nation. (Psalm 24:1-2) Pray for God’s blessing on Israeli coastal waters, which were recently found to contain vast reservoirs of natural gas. 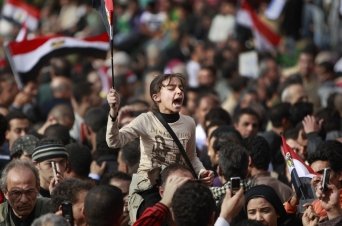 Upheaval In The Middle East: Jesus is the Missing Peace. Throughout the Middle East, previously unshakable autocrats are falling. The long standing government of former Egyptian President Mubarak has been replaced with temporary military rule linked to the vehemently anti-Zionist Muslim Brotherhood. Many Egyptians already bemoan that the democratic freedoms for which they fought are failing to materialize. Now murmurings of civil war are heard in Jordan. Meanwhile, revolts against Syria’s President Assad are being cruelly quashed. Since Assad is empowered by Iran, it seems unlikely he will fall in the near future. However, the power of prayer exceeds the power of Iranian President Ahmadinejad or the mullahs controlling him. In any case, reputable prophetic voices and reputable secular sources do not know how matters will play out. Neither do we, but we do know the heart and Word of God. Pray that millions of Muslims in our region will realize that Jesus is the essential but missing piece to peace. Isaiah 19 and other prophetic Scriptures indicate God has a glorious future ahead for some of Israel’s neighboring Arabic peoples, including Egypt, Syria, and Iraq. Pray they will receive grace to repent of their emnity against Yahweh and His Jewish people.

The Ignored Iranian Threat. While Western military actions have been taken against Libya’s Muammar Gaddafi, Iran presents a far greater threat to its own people, to Israel, the region, and to the world. However, recent populist Iranian uprisings have been brutally suppressed with little outcry from democratic nations. Because Iran does not permit international media access, little is known in most of the world concerning the extent of its heinous tyranny — or of the genuine spiritual revival amazingly taking place there. Pray for Israel to remain safely in the eye of the Mideast hurricane. Pray that multitudes of her enemies, including Iranians, will turn to the Jewish Messiah to satisfy the longing of their hearts for true freedom. (2 Peter 3:9)

Lies Against Israel Exposed. Richard Goldstone, the South African jurist commissioned by the UN Human Rights Commission to investigate Israel’s war with Gaza in 2008, stated last week that the conclusions of his notorious Goldstone Report are flawed and based upon incomplete information. He specifically retracted the charge that Israel’s armed forces intentionally targeted Gazan civilians. In the absence of evidence “offered” by Gaza that could explain to him why so many non-combatants died, he had wrongly assumed they were intentionally targeted by Israel. The truth is that many who died were not civilians, but terrorists. Others fell victim to Gaza’s use of mosques, hospitals, schools, and other “public institutions” as terror nests. Some were killed because any war, sadly but simply, causes collateral damage due to human error. In any case, due to the Goldstone Report, in 2010 the world harshly condemned Israel for committing war crimes against humanity. Many Western nations judged the Jewish State to be morally equivalent to Hamas. The damage to Israel due to mistruths stated in the Goldstone Report cannot be overstated. Pray that truth will be revealed. Please pray also that Israel will act with righteousness as it responds to increasing lies and false condemnation against her in the days and months ahead.

A Palestinian State This Year? International support is rapidly mounting for the Palestinian plan to unilaterally declare the existence of a sovereign state. Slated for approval by the United Nations in September, the plan has encountered little opposition, even from the US. Israelis are extremely concerned over this impending threat to their national security and their historical, biblical homeland. Together with other global leaders, UN Secretary General Ban Ki-moon has stated that Israel must stop building in pre-existing Jewish neighborhoods in East Jerusalem, Judea and Samaria. He has concluded these are “occupied territories” belonging to the Palestinians, and “the occupation that began in 1967 is morally and politically unsustainable, and must end.” The UN could, in theory, create a State of Palestine and appears headed in that direction. Meanwhile, of even more immediate concern, is a renewed effort by the Quartet (US, EU, UN, and Russia) to exert global pressure on Israel this spring to formally relinquish all the so-called occupied territories. Please pray for divine intervention! Pray according to God’s unconditional land covenant to Israel and her prophetic last days’ restoration. Pray for mercy on the nations aligned against Israel, as judgment will fall on her enemies dividing up her land. (Joel 3:2)