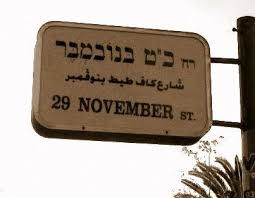 It has been said that November 29 is a day that never ends. On that date in 1947, the members of a new organization convened in a building in New York City and changed the world. A vote was held to decide whether to partition the British Mandate of Palestine into two states, one for Jews and one for Arabs. To pass, the motion needed a two-thirds majority. By a narrow margin, the motion passed into UN Resolution 181, announcing the re-creation of a Jewish state. The Arabs rejected the Resolution, refusing to create a Palestinian state that would include anything less than the entire Mandate land. (A recording of the actual vote can be heard here.) Jews around the world celebrated – briefly. Arabs revolted and soon attacked the not-yet-born Israel.

It is said that November 29 never ends because the issue of Israel’s existence is still contested – especially at the UN that God once used to re-create it. There, on this day every year, the issue of Israel stands for yet another vote or debate. It was on November 29, 2012, for example, that the UN raised the status of the Palestinian Authority to that of a “non-member observer,” creating for the first time a de facto state without borders. Today the UN will commemorate its historic, 1947 vote by celebrating the International Day of Solidarity with the Palestinian People. At least one anti-Israel resolution will likely be passed.

Had the Arabs accepted the original UN partition, they would have a state with borders. They could have benefited greatly from their Jewish neighbors. But that would have required recognizing the existence of Israel – something that remains impossible for most of them to do. Yet, despite protestation, condemnation, and denial to the contrary, Israel exists and thrives as a beacon of light in an increasingly dark Middle East.

After all, there’s a street sign to prove it.  And that’s not to mention the beautiful, sure signs in God’s Word!

Your ticket for the: Why November 29 is a Street in Jerusalem