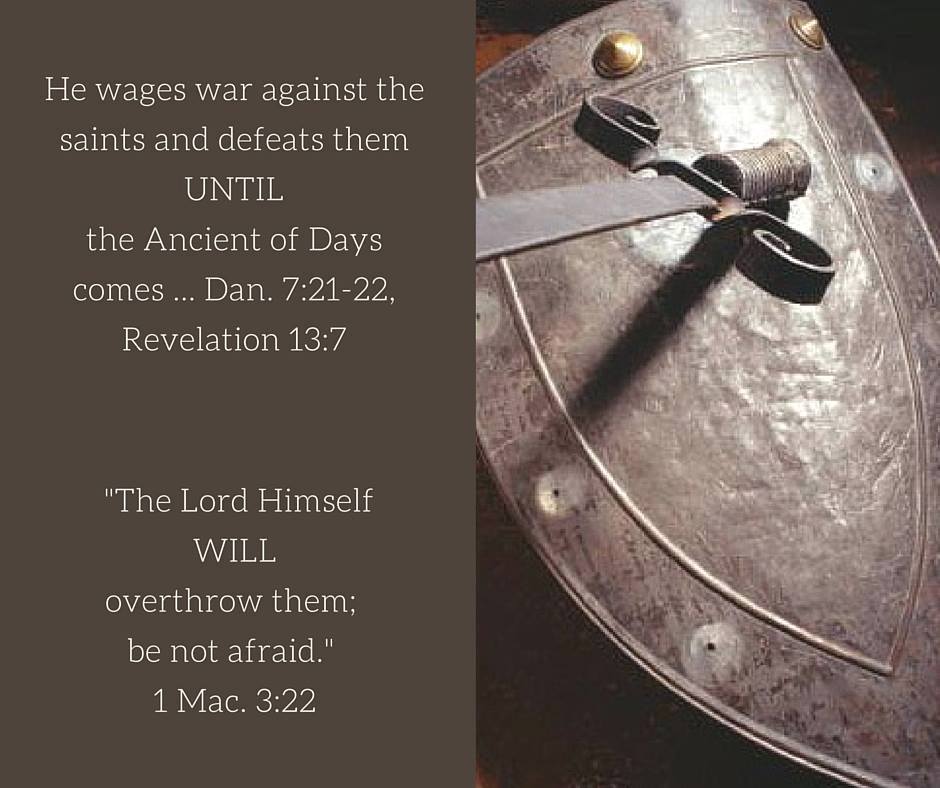 A day before Hanukkah, US President Obama brokered UN Security Council Resolution 2334, declaring that Judea and Samaria (including the Western Wall) belong to Palestine. The resolution puts in place putative legal groundwork, lacking until now, for dividing Israel into a Palestinian state. The exquisitely evil timing of the American ambush against Israel is not unprecedented. Through history, God’s enemies have plotted genocidal schemes against the Jews specifically to coincide with biblical holidays. Historically, those schemes backfire. God judges His enemies and more than overcomes them. From a macro-view perspective, He actually advances His Kingdom to the next phase of global redemption. Therefore, when the kingdoms of this world rage against YHVH and His people, we should weep and pray. But we should also be encouraged, for the Kingdom of Heaven will soon break upon us in greater, glorious measure.

Last week’s unjust international resolution at Hanukkah (and Christmas) may forebode a new year of extreme difficulty for Israel and the nations. Battle lines have been drawn; kingdoms are clashing. Sadly, the battle may be bloody. There will likely be serious casualties—and a call for compassionate ministry in response. For this we must be ready. But as God delivered His people over 2,000 years ago at Hanukkah (and Christmas), we must remember He will deliver us again.

The Hope of Hanukkah

Israeli officials say they expect Obama and the UN to take further steps to enforce Resolution 2334 before the Nobel Peace Prize-winning president leaves office next month. The next president will be hard pressed to reverse or amend the international resolution or any mechanisms put in place for its enforcement. He will, however, have authority to redirect America’s response to the travesty. We must pray for him to act wisely and rightly so other nations may follow his lead.  President-elect Trump faces an unprecedented, worldwide anti-Israel alignment that has just gained exponential momentum. It is possible only a wide scale military operation can reverse this momentum. (On this I pray I prove wrong.)

Global circumstances at the start of 2017 are reminiscent of those leading to events culminating in the original Hanukkah. Less than 200 years before Messiah’s first coming, the Seleucid emperor Antiochus IV was in power across the Middle East. The crazed conqueror is regarded by Bible scholars as a type of antichrist prophesied in the book of Daniel. Antiochus IV sought to rule the known world as one people, under one humanist religion. With great arrogance he surnamed himself “Epiphanes,” meaning Manifest God. He made it illegal to teach or even speak the Holy Scriptures. With murderous tortures resembling those of ISIS, the devil-driven ruler aimed to destroy all worship of YHVH. Miraculously, a small band of Jewish priests named the Maccabees militarily resisted and defeated him. Hanukkah celebrates this victory.

The timing of Resolution 2334 last week, ushering in Hanukkah, actually underscores its ultimate defeat. As God raised up a remnant over 2,000 years ago to defeat the anti-Jewish, antichrist spirit, He will do so again. He wants us inspired, infused with faith, and empowered for victory. He wants us embracing the hope of Hanukkah.

The Maccabee remnant stood firm in the grace of YHVH. Unlike us, they were not indwelt by the Holy Spirit. Nevertheless, they intentionally chose to access the strength, courage and faith residing in us today. They clung tenaciously to righteousness. Hanukkah’s heroes of old loved not their lives unto death. They trusted God as their personal redeemer, despite the limited revelation they had of His salvation. They knew He would use their faithfulness—even martyrdom—for His glory through eternity. Indeed, these saintly ones are collectively memorialized in Hebrews 11:35-39. Their testimony is intended to help us stand firm in these last days.

In Matthew 24, Yeshua (Jesus) connects Hanukkah-related events with the end times antichrist. He shows how Daniel prophesied concerning them both. Prior to His first coming, the antichrist spirit sought to destroy the Jews. Satan’s goal was to thwart God’s plan of redemption and future, governmental Kingdom rule. But the Jews survived. Hanukkah resulted. Messiah King was born not long thereafter.

The antichrist spirit will arise with even greater vengeance before Messiah’s Second Coming. Conditions that led to the original Hanukkah will be similar to those resulting at the end of this age. Events at the UN last week reflect this prophetic trajectory.

In 2017 and beyond, like the Maccabees, you and I will have opportunity to align in righteousness with the Kingdom government that rests on His shoulders. (Isaiah 9:6) In an increasingly antichristian/anti-Jewish culture, it will be our Father’s good pleasure to impart faith, courage and victory to us. This new year, I encourage you to align even more intentionally with the government of His Kingdom. Execute the authority He gives you for the salvation of Israel and the nations. Choose righteousness and humble boldness. Do not let your love grow cold because of the increase of wickedness around you. (Matthew 24:12)  And do not keep silent. Remember that no circumstance or decision of yours will be too big, or too small, to impact according to the rule of His government.

God sets times and seasons, giving special meanings to them. (Daniel 7:25) One hundred years ago in 1917, Britain’s Balfour Declaration formalized the intent to create a Jewish homeland. Seventy years ago in 1947, UN Resolution 181 re-established a Jewish state. Fifty years ago in 1967, the City of Jerusalem was restored to Israel. The time frames of 50, 70 and 100 years are biblically significant. 2017 could prove a watershed year for Israel (and the nations) in which your life makes a difference for eternity. There is reason to believe we are entering a very challenging, but also very Happy New Year.

Your ticket for the: How Hanukkah Empowers Us to Overcome the New anti-Israel Alignment this New Year