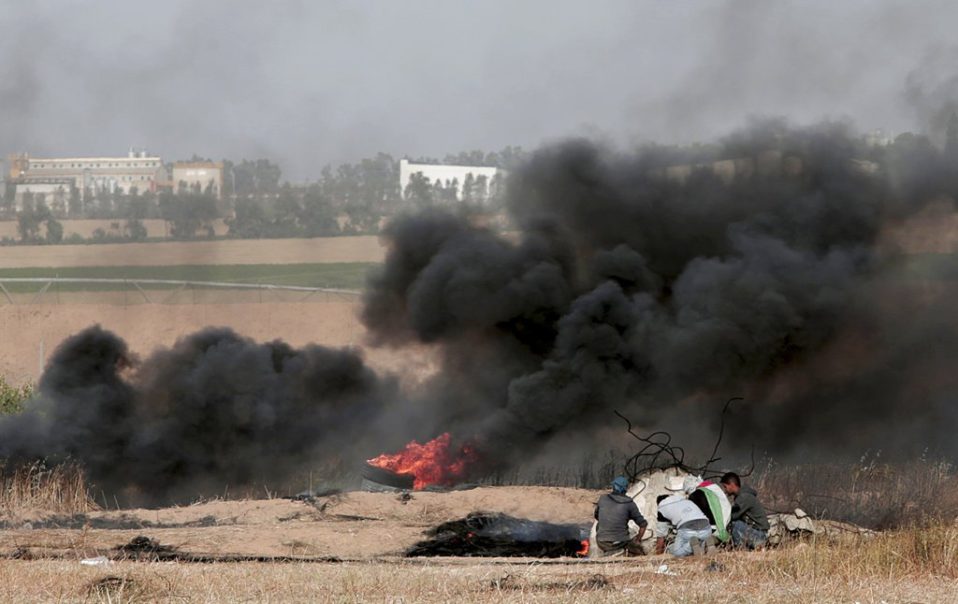 Last week Hamas, the elected terrorist government of Gaza, launched protests and riots along its border with Israel. It dubbed the campaign, “March of Return.” The “Return” refers to the Palestinians’ demand of nearly 70 years that refugees from its 1948-49 war against Israel (Israel’s War of Independence) return to and flood the Jewish state, together with their millions of descendants. The “March” is a call for multiplied thousands of Gazans to march to – and actually across – the Israeli border. Hamas threatens to continue this violent, riotous march until May 15, when the US moves its Israeli embassy to Jerusalem. Many believe Hamas is trying to provoke Israel into starting a war – at least according to world opinon.

The March of Return was never meant to kill Israelis as much as it was meant to kill Palestinians. Hamas knows its only successful weapons against the Jews have been in the realms of media and lawfare, through fanning flames of global anti-Israelism. This it can once more achieve by forcing its civilian population, including women and children, to the Israeli border in front line positions where they are likely to be injured. Since every Palestinian civilian casualty stokes international condemnation of Israel, Hamas counts these casualties as victories rather than losses. Thus far, at least 20 Gazans have been killed and approximately 1,000 injured in the marches. As part of this tragic, international publicity stunt, victims’ families receive hundreds or thousands of dollars as a reward from Hamas. http://www.jpost.com/Israel-News/Before-the-storm-Israelis-and-Palestinians-along-the-border-fence-549028

As I write, Hamas has just begun burning a threatened 10,000 tires today along the border. The goal is to create billowy clouds of black smoke sufficiently thick to prevent Israeli soldiers from seeing and shooting back at the rioters. Tire burning was delayed several hours, however, due to an unexpected shift in the wind, which would have blown the smoke right back into Gaza. (This was an answer to prayer for God to re-direct the wind.) Israel has petitioned the World Health Organization to intervene, warning that noxious fumes will result in an unprecedented ecological, agricultural and health disaster. Meanwhile, Palestinian women deployed at the border are using mirrors to reflect sunlight toward the solders in an effort to blind them. https://www.timesofisrael.com/cogat-warns-of-unprecedented-pollution-as-gazans-amass-tires-to-torch-at-protest/

Recall that in the Hebrew Scriptures, the ancient – and now extinct – Philistines inhabited Gaza. They blinded the Israeli leader Samson, their avowed enemy, by gouging out his eyes. (Judges 16:21) In retribution, Samson killed over 3,000 Philistines, including Philistine/Gaza’s national leaders. (Judges 16:27-30)

God contends against those who contend against Israel: “Whoever touches you touches the apple of My eye.” (Zechariah 2:8) In this context, touching the apple of God’s eye is like poking a finger in the eye of YHVH. Those who dare do this will find their own vision seriously obscured.

Sadly, the eyes of many of the people of Gaza have been blinded. Unrelenting hatred of Israel has caused a fatal obscuring of their vision. Truth hides from them in darkness, deception and death. They know little or nothing of a Creator who loves them. Their greatest hope may lie with those of us who will forgive them and pray for them.

Israel’s last war with Gaza broke out in 2014. Back then, while praying into the conflict, I sensed the Lord speak to my heart. “Will you persevere in prayer for My purposes against Gaza’s enemies with the same passion you would concerning Israel? For Israel and Gaza have the same enemies. Those enemies want to kill and destroy both peoples.” At that moment I saw how Gazans had been overtaken by some of Satan’s cruelest and most powerful, tormenting demonic forces. My attitude toward Gaza has been different ever since.

The name “Gaza” derives from the Hebrew Azzah, meaning “strong.” Biblically and historically, Gaza has been a stronghold city difficult to conquer. Its inhabitants were descendants of the Anakim (possibly supernatural giants). Gaza is mentioned as a city that Joshua was not able to subdue. (Joshua 10:41; 11:22; 13:3) It was assigned to the tribe of Judah, which eventually obtained possession of it for a relatively brief time. (Judges 1:18, 3:3; 13:1; https://www.biblestudytools.com/dictionary/anakim/ )

Some of the prophets pronounce judgments of God against Gaza. (Jeremiah 25:20; 47:5; Zephaniah 2:4, Amos 1:6-7) The most relevant for declarative prayer today is Zechariah 9:5-8. Zechariah, whose name means, “The Lord Remembers,” ministered during Israel’s first return from exile and restoration.Today, we believe God to remember His Word concerning His enemies during Israel’s second (and present) return from exile and restoration. We also keep in mind and heart that we do not battle or pray against flesh and blood, but against evil forces and demonic entities who are common enemies. As we pray, we continually hold up God’s purposes for the salvation of Gaza, as well as Israel. We release this conflict to Him in the authority of the Spirit for the sake of His Kingdom.

Ashkelon [then part of Gaza] will see it [God’s destruction of Israel’s enemies] and fear; Gaza will writhe in agony and Ekron [a city in Philistia] too, for her hope will wither. Gaza will lose her kin and Ashkelon will be deserted. A mongrel people will occupy Ashdod [then part of Gaza] and I will put an end to the pride of the Philistines. I will take the blood from their mouth, the forbidden food from between their teeth. Those who are left will belong to our God and become a clan in Judah, and Ekron will be like the Jebusites. But I will encamp at my temple to guard it against marauding forces. Never again will an oppressor overrun my people, for now I am keeping watch. (Zechariah 9:5-8)

Your ticket for the: Uprising at the Gaza Border: Could it lead to spiritual breakthrough?