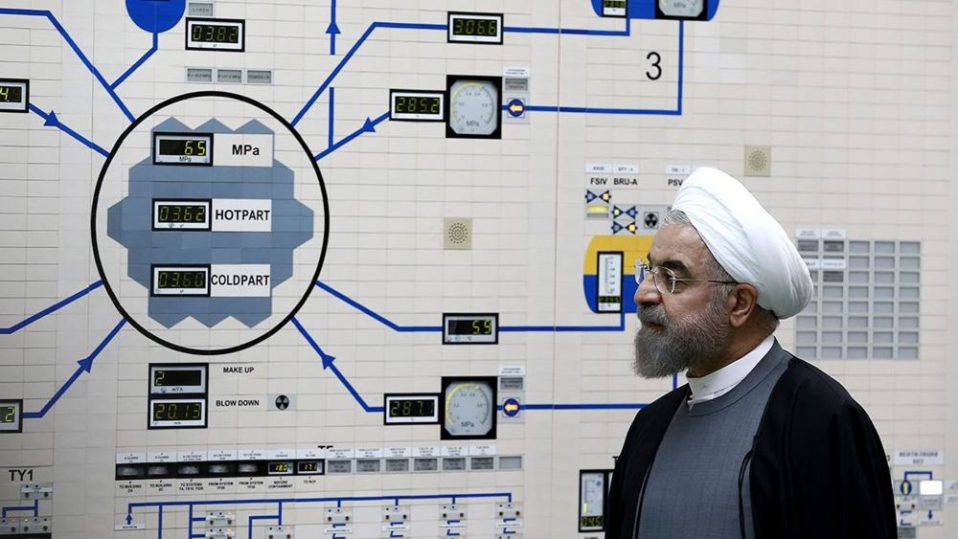 We are sounding a critical call to pray now concerning Iran. According to official reports, by the end of this month (October 2021) Iran will have acquired enough enriched uranium with which to build a nuclear weapon. Iran has openly declared for many years its intent to “wipe Israel off the map.” Israel and Iran have long engaged in an undeclared or shadow war, in which Israel has managed to substantially set back Iran’s nuclear program. But that shadow war is reaching its end.

Earlier this month, we hosted an interview for Israeli intercessors with an internationally respected journalist who is an expert on the Middle East. The purpose of the interview was to discern how to pray more specifically into the Iranian threat. An important takeaway from the interview is that Iran could be a mere six months away from detonating a nuclear bomb. While some reports estimate the time could take as long as two years, the most frequently reported guestimate seems to be a year. On the basis of this interview and our own research and intercession, we’ve compiled a detailed list of prayer points, included below.

At this time, other nations appear unwilling or unable to deal effectively with Iran. Since Iran has posed no direct, existential threat to them, other issues clamor for their attention. In any case, the Jewish people have learned from history that the world rarely, if ever, comes to our defense. YHVH Himself is our faithful Defender and Covenant Keeper. Still, He typically works through men and governing authorities.

Israel’s current unity government, sadly, is the most disunited government the state has known since its re-establishment in 1948. Under weakened leadership, we are literally surrounded by Iran’s proxy terror groups Hezbollah, Hamas and Islamic Jihad. These groups, especially Hezbollah, are well armed with a total of over 100,000 rockets, missiles and other projectiles. Should Israel preemptively strike at Iran, precision guided missiles and exploding rockets would rain down over the country. Israeli Defense Forces set a budget this week to cover the costs of preparing for such a scenario. Airstrike training is underway. In the anticipated retaliation, large numbers of Israeli civilian casualties are expected. A nuclear exchange – which would prove catastrophic – cannot be ruled out.

At a UN conference last month, Iranian Foreign Minister Abdollahian made this remark: “As the new foreign minister of the Islamic Republic of Iran, I’m honored to announce that my nation’s willpower is dedicated to the total elimination of all forms of racial discrimination including … Zionism. These are crimes that constitute horrible atrocities such as child killing and the creeping occupation through settlements, which extends to the proximity of Al-Aqsa mosque.” A respected political analyst at the Foundation for Defense of Democracies rightly interprets Abdollahian’s remark in saying, “The Islamic Republic will use every opportunity afforded to it to seek ‘the total elimination’ of Zionism. That is code for working towards the destruction of the Jewish state.”

Where does Israel’s closest ally, the United States, stand in the matter? As an article in this week’s Wall Street Journal states, “It is a common hope within Washington’s foreign policy establishment that no matter how close Iran gets to the atomic threshold, it won’t detonate a bomb. The intelligence community claims Tehran isn’t currently taking steps to build a nuclear weapon. Many want to believe that Supreme Leader Ali Khamenei’s fatwa against the production and use of nuclear weapons will keep Iran a threshold state. These hopes are delusional.

“The Islamic Republic of Iran is led by an ardent ideological regime…Leaders of the regime speak incessantly about the cabal of Zionists and Jews who control America and plot against the Islamic revolution. Mr. Khamenei and his henchmen haven’t spent billions and endured a tidal wave of sanctions and social unrest only to get close to a nuclear weapon. They will build the bomb as soon as they can and justify it afterward.”

The Scriptures do not promise that Israel will be spared from a pre-apocalyptic war that could kill millions of Jews and others. The nation will survive, yet countless lives could be lost. We may be wrong, but together with many Israeli believers, we do not discern that a war with Iran in the next year or so quite fits the description of the apocalyptic war prophesied in Ezekiel 38-39 (yet?).

Meanwhile, many of us who pray find ourselves weary from, focused on, or even distracted by, issues related to covid and covid vaccines. May God equip us now by His grace for the battle with Iran.

1. Pray for the toppling of the Iranian stronghold of Islam. Our battle is not against flesh and blood, but against powers of this dark world and evil spiritual forces in high places. The weapons of our warfare are not those of the world, but mighty in God for pulling down strongholds, casting down arguments and every high thing that exalts itself against the knowledge of God. (Ephesians 6:12; 2 Corinthians 10:4-5; Daniel 10:13)

2. Pray for the Church of Iran. Government registered churches in Iran are mostly Armenian Orthodox and Assyrian Orthodox. Both denominations adhere to replacement theology and have little or no concern for their nation’s anti-Israel stance. In contrast, the underground church in Iran, consisting mostly of Muslim background believers, is strongly supportive of Israel. They comprise the world’s fastest growing church; however, followers of Jesus amount to only 1.5 percent of Iran’s total population. Pray for the strengthening and growth of the Iranian Church. Pray protection over them in any military operation that may break out with Israel.

3. Pray for the internal collapse of the Islamic regime. The journalist we interviewed said that only 5-10 percent of the Iranian people actually support the Islamic regime. Pray for grace for the Iranian people to rise up in courage against their leaders. Pray for unified, ethical, and skilled underground leaders, accurate intelligence, funding, unfettered communications, any necessary weapons to be supplied, the practical support of other nations, wise strategies and mostly, divine favor. Pray that God’s enemies demonically driving the Islamist regime will turn against each other rather than Israel. (Judges 7:22, 2 Chronicles 20:22)

Social media is helping drive opposition to the regime. The majority of young people are passionately opposed to the regime and are using social media to form and build resistance groups. Pray they will continue finding new ways to use social media to withstand and even overthrow the regime, despite its strong censorship.

The Iranian Supreme Leader, currently Ali Khameini, is the highest Islamic cleric in the country, holding supreme religious and political power. He controls the army, national security and judiciary. The Supreme Leader is appointed for life. The President of Iran, currently Ebrahim Raisi, is elected to office but in many ways serves merely as the governmental voice of the Supreme Leader. Pray for the salvation of both Khameini and Raisi. Pray that if they refuse to align with God’s heart and purposes, He will either neutralize their power, capacity and effectiveness or replace them with other leaders who will align with His will. Pray that the demonic anointing of unity between them will be broken. (Psalm 83:9-18)

“Natural” disasters, including several major earthquakes, have struck Iran and damaged its nuclear facilities in the past decade. Severe drought has hit the country hard. Pray that God will continue using natural means to help set back Iran’s nuclear program, topple the regime and spare innocent human life. Pray for the spread of the Gospel as these things occur.

4. Pray, as Iran works on developing a nuclear weapon, that:

*A spirit of division will overtake Iran’s top leaders;

*The historical discord between Sunnis and Shiites will stir up and foment great disunity;

*Financial arrangements between Iran and its proxies with China and Russia will break up;

*Iran will make many strategic mistakes, believing strong delusions, one after another;

*Iran’s design for a nuclear bomb will be based on wrong calculations and bad information;

*Confusion and disorder will rule at every juncture of its nuclear program;

*Critical materials, plans, data and intelligence will be lost, destroyed or sabotaged;

*Policymakers, scientists, engineers, factory workers, administrators and others involved in building nuclear weapons will turn against each other. (Judges 7:22, 2 Chronicles 20)

*Iranians spying on Israel will be caught and reveal any information needed by Israel.

*Iranians and others spying on Iran on behalf of Israel will be kept safe, access needed intelligence, be treated justly by Israel, and receive God’s blessing.

5. Pray, as Israel plans preemptive attack(s) on Iran, that:

*Israel will have the government it needs to respond effectively to Iran, and that if our current government is too weak or internally divided to protect the nation, that God will raise up other leaders;

*Israeli leaders will humbly seek the Lord for His protection, direction, strategy and wisdom–and give Him the glory for it;

*God will reveal, as He has for over a decade, creative and effective, nonmilitary modes of attack which spare human lives;

*God will show Israel how to form an international coalition of nations, if that is His will, to withstand Iran;

*God will fully prepare our government, military, people and Body of Messiah for whatever war may take place, as such a war could be devastating to Israel apart from the miraculous;

*Israel will acquire all the military weaponry needed for such a war, while trusting in Him;

*Israeli believers will acquire the spiritual weaponry needed for such a war, trusting in Him;

*Israeli spies in Iran will be supernaturally protected and gain access to all needed intelligence;

*God will have mercy on the US, prevent it from rejoining the 2015 Iranian nuclear deal, and lead the Biden administration to robustly support a preemptive Israeli attack – unless it is His will and time to deal otherwise with the US according to Romans 1:18-32;

*If it is His will, God will use Israel as His weapon of war to break the stronghold of Islam and free the Iranian people to worship Him according to Jeremiah 51:20-26;

*God will fulfill Jeremiah 49:35-39 in His way and time: “Thus says the Lord of hosts, ‘Behold, I will break the bow of Elam [modern Iran], the foremost of their might. Against Elam I will bring the four winds from the four quarters of heaven, and scatter them toward all those winds; there shall be no nations where the outcasts of Elam will not go. For I will cause Elam to be dismayed before their enemies and before those who seek their life. I will bring disaster upon them, My fierce anger,’ says the Lord; ‘And I will send the sword after them until I have consumed them. I will set My throne in Elam, and will destroy from there the king and the princes,’ says the Lord. ‘But it shall come to pass in the latter days: I will bring back the captives of Elam,’ says the Lord.”

*The apocalyptic war prophesied in Ezekiel 38-39 will not take place out of God’s timing and will;

*God will mercifully spare lives, furthering the Gospel and glorifying Himself, with minimal loss of life, minimal harm and minimal destruction to accomplish His purposes on earth.

Thank you for joining us in prayer. The Lord be magnified!

Your ticket for the: Call To Pray NOW: Iran!