I know the plans that I have for you, declares the Lord. They are plans for peace and not disaster, plans to give you a future filled with hope. Jeremiah 29:11

As you likely know, Israel has just finished Operation Cast Lead, its military effort designed to cause Hamas to stop firing rockets at civilian populations of the Negev. The operation took three weeks. Most of the Israeli fire came in the form of air force bombs dropped on Hamas military or leadership targets, as well as numerous tunnels used to smuggle weapons across the Egyptian border. Land troops went into Gaza to hunt down specific targets. Amazingly, they did not succumb to booby-trapped houses or get lured into indefensible positions in the streets and corners of Gaza. By God’s grace and according to many accounts that could be called outright miracles, Israeli military losses were minimal.

What is rarely stated by the mainstream media is that most Palestinians chose to stay, either ignoring the warnings or furthering the cause of jihad as potential martyrs. Israelis genuinely lament over harm to innocent life, but with mosques, hospitals, schools, homes, and even UN structures used as weapons storage units and launching pads for Hamas rockets, the concept of “innocent civilian” is blurred. It could be said the election of Hamas in January, 2006 as the fledgling democratic representative government has rendered the phrase “innocent Gazan” somewhat of an oxymoron. In any case, Hamas has sadly demonstrated that it is more interested in the death of Israelis than the survival of Palestinians. As former Israeli Prime Minister Golda Meir once said “We will have peace with the Arabs when they love their children more than they hate us.”

Messianic Jewish soldiers who served in Gaza are sharing accounts of what appear to be miraculous protections in the fighting. Soldiers’ hearts softened to God and whole units of men prayed together during the operation. Meanwhile, secular radio stations played songs exalting the God of Israel as our sole Defender in times of war. It is generally agreed that Israeli troops fought with a renewed spirit of fervency unexpected by Hamas and much of the world. God is moving and Jewish hearts are softening. 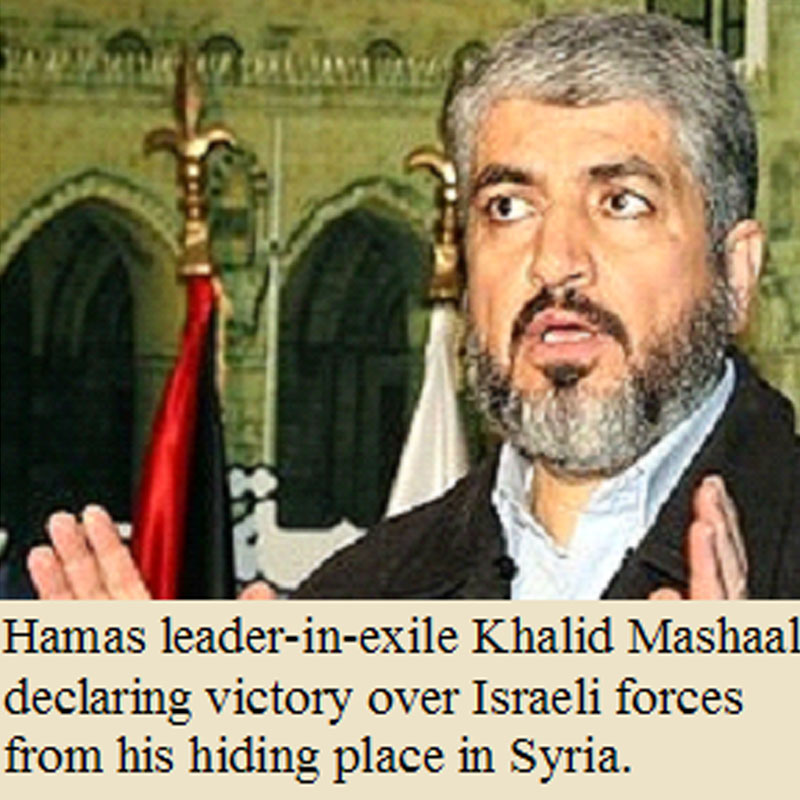 Immediately before the inauguration of President Obama, Israel announced a unilateral cease fire and withdrew its troops from Gaza. Hamas leadership refused to acknowledge the withdrawal, but within 24 hours announced their own limited ceasefire, proclaiming victory over Israel. For about three days there was relative calm. Schools in the Negev met once more in classrooms, rather than bomb shelters. But soon the rockets fell again, both at Israeli military and at civilian centers. Israel’s military response was swift, destroying smuggling tunnels and weapon stockpiles not destroyed previously in the operation

The European Union and Egypt have sponsored negotiations to try to preserve calm. Israel and the US have entered into a Memorandum of Understanding to control arms smuggling through Gaza, especially from Iran. There is talk of a multinational force to help end such smuggling. Egypt took action to turn away an Iranian ship, intercepted by the US, laden with arms bound for Gaza.

The long term outcome of Operation Cast Lead remains to be seen. On the one hand, it seems we have been this way before. Hamas still governs in Gaza, and potentially, soon in the West Bank. President Mahmoud Abbas of the presently less extreme Fatah party has diminishing credibility with his people. His legal term of office actually expired during the war. Israel still has no partner for peace amongst the Palestinians. Prisoner Gilad Shalit—if alive—is approaching 1000 days in captivity and seems no closer to freedom now than before. Hamas still has an arsenal in Gaza sufficient to terrorize much of southern Israel. And George Mitchell is back, albeit on behalf of a different US President, to try to figure out how the Jews and Arabs can get along. So at this point, on the one hand and in the natural realm, it might seem as if little has changed, with only a temporary and fragile truce in place.

But on the other hand, we as believers look not just to the seen but to the unseen:

■ With the prayers of the Church, God will exalt Yeshua above Mohammed and Islam. We personally witnessed a great harvest of souls when communism toppled in the former Soviet Union. Pray for the toppling of Islam and for a harvest of Muslim souls.

■ Isaiah 19:23-25 prophesies a highway of worship from Egypt through what is today Iraq. Interestingly, Egypt and Iraq, together with Jordan, are being brought into somewhat of an alignment at this hour. As Sunni Muslim nations, they are opposed to the more radical and fascist Shi’ite regimes of Iran and Hamas. At the same time, underground churches from Egypt to Iraq are growing and salvations are taking place. Missionaries report that the war in Iraq resulted in new freedom for the Gospel to spread. Though ultimate fulfillment of Isaiah 19 will occur after the Lord returns, we are transitioning to that time as birth pangs increase preceding His return. Pray for the prophetic unfolding of this highway of worship and the dismantling of powers that would resist it.

■ Several Bible passages refer to the destruction of Gaza. These Scriptures describe events that transpired in the past, but might still carry some prophetic relevance for events today. Pray for the destruction and demise of Islam as the god over Gaza.

■ Pray for Israeli hearts to be softened and sincerely turned to God during these trying times. Pray that veils be removed not only over the eyes of the Jewish people, but over the Church. Many Christians, including some who are prophetically bent, remain veiled to the truth that “today is the day of salvation” not only for the Gentiles, but for the Jews. It is the fullness of the Gentiles—reflected by the prayers of the saints—that God will use to bring in a harvest of Jewish souls.

■ Though only God can bring lasting peace to Israel (or to the nations of the earth), pray with us for Israel’s leaders, that we may live peaceable lives in all godliness and holiness befitting the gospel . (See 1 Timothy 2:1-4)

On February 10, Israel will vote for a new government. Former Primer Minister Benjamin Netanyahu holds the lead over Tzipi Livini and former Prime Minister Ehud Barak in the race for prime minister. Most Israelis think the war has helped Netanyahu’s cause, as he is the most right-winged of the candidates. The Kadima party of Livni and Olmert has now led Israel through three wars (Lebanon 2006, Gaza 2006, Gaza 2009) with no clear resolution from any of them. Most Messianic believers seem to favor Netenyahu as his platform appears the most reflective of biblical principles.

During Operation Cast Lead, large reservoirs of natural gas were discovered off the northern coast of Israel. This discovery could represent a turning point for Israel vis a vis the nations on political and other levels.

■ Please pray that the candidate God desires to lead this nation would be elected, and that this person possess a heart malleable to Him.

■ Pray that the next government display favor toward Messianic believers.

■ Ask the Lord to bring forth treasures hidden in darkness and riches stored in secret places in the Land. (See Isaiah 45:3).

Israel continues to experience a drought of unprecedented magnitude since its inception as a modern State. There will not be enough water supply this year to meet demand.

■ Please pray that physical rain would fall on this dry land, as well as spiritual rain—-the reign of God.

■ Pray with us for a spirit of grace and supplication to be released on Israel, including a spirit of burning on the remnant of those of us who are believers in the Land.

PRAY FOR THE PEACE OF JERUSALEM: MAY THOSE
WHO LOVE HER BE SECURE. (Psalm 122:6)

Your ticket for the: News from Israel – February 2009