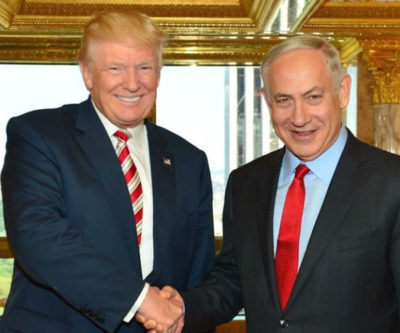 As you know, President Trump will be meeting with Prime Minister Netanyahu in Washington tomorrow, February 15, 2017. Yesterday we participated in a prayer watch at the house of prayer in Jerusalem with which we co-labor, Succat Hallel. There the Holy Spirit revealed to us critical points for prayer about tomorrow’s meeting. We are adapting the notes below by our friend Rick Ridings, director of Succat Hallel, so you can pray as you read.

In addition to the Trump-Netanyahu meeting, we are to keep praying for the UN, and against surprise, evil schemes concerning Israel. According to yesterday’s rather shocking Israeli news report, UN Secretary General Antonio Guterres is considering offering a very high position, perhaps Deputy Secretary General of the UN, to Tzipi Livni. Livni was the Foreign Minister of Israel under Prime Minister Olmert. She has long advocated relinquishing most 1967-gained Israeli land in order to create a Palestinian state – with few conditions. We believe that if she were to come into such a position, she could be used as a fig leaf to cover over, as well as to personally promote, strong anti-Israel and globalist, “divide up the Land and Jerusalem” type resolutions or actions.

We ask for your mercy, O Lord, that any Jezebel or other anti-God spirit working through Tzipi Livni would not be given a platform at the UN. Please quickly expose and thwart any demonic schemes at work in seeking to appoint her. Would You firmly shut the door to her gaining any position of international influence that could wrongly harm Israel. We pray Your Word from Psalm 33:8-12:

“Let all the earth fear the Lord; let all the people of the world revere him. For he spoke, and it came to be; he commanded, and it stood firm.  The Lord foils the plans of the nations; He thwarts the purposes of the peoples .  But the plans of the Lord stand firm forever, the purposes of his heart through all generations.  Blessed is the nation whose God is the Lord, the people he chose for his inheritance.”

Thank you for standing on the walls of Jerusalem with us to watch over this city and nation with His Word!

Your ticket for the: A CALL TO HUMBLE, BOLD PRAYER – NOW!