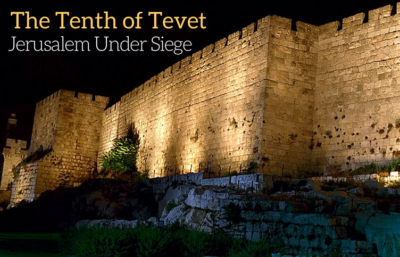 Tomorrow, January 8, is the Fast of Tevet 10 (“Asara b’Tevet”), marking the first day of the Babylonian siege of Jerusalem that led to the destruction of the Temple in 586 BC. (2 Kings 25:1, Zechariah 8:19) The siege also led to Jewish exile from the Land. To this day, we have not fully recovered from either event. But according to rabbinic tradition, on Tevet 10 we do not mourn the pain of the past as much as learn and turn from our role in it. The rabbis say the fast represents a time for new beginnings that can result in restoration.

Due to heightened political warfare and lawfare against Israel in the UN and elsewhere this month, you may want to join us in “Asara b’Tevet.” Today we face an attempted siege against Jerusalem and threatened exile from the Land reminiscent of that which occurred 2,500 years ago. Once more, the Temple Mount serves as a flashpoint. But God is in control!

Fifty years ago God returned Judea and Samaria, including Jerusalem, to the Jewish people. This return was based fairly and squarely on international law. It was also consistent with Scripture:

“Hear the word of the Lord, O nations; proclaim it in the distant coast lands. ‘He who scattered Israel will gather them and will watch over His flock like a shepherd.'” (Jeremiah 31:10)

God is speaking specifically to the nations in the verse above. He has a word for them and He wants it proclaimed as far as “the distant coast lands.” Nations and coast lands that are distant from Israel would include UN Headquarters in New York City. They are to know He is the One who will gather the Jews to the land He promised them. He is the One who decreed exile on us. Only He can reverse His own curse. If the Jews are gathered to their land, as they are now, He is the One doing the gathering. And He is doing it as a shepherd. On the 10th of Tevet, we can decree with authority that His word will overrule and overturn UN Resolution 2334. The close timing is just another sign God is in control.

The weapons He us to fight with are not the weapons of the world. They have divine power to demolish strongholds. (2 Cor. 10:4) Let’s use them tomorrow (and beyond) to restore and release His kingdom government to Israel and the nations!

Your ticket for the: Another Sign God is in Control of Recent Political Warfare Against Israel