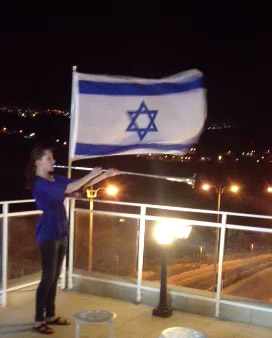 Happy Rosh Chodesh, everyone! If you know what I’m referring to, you probably also know this post is a few days late. Rosh Chodesh is Hebrew for “Head of the Month” or New Month. It is also known as the New Moon because the biblical calendar is lunar based. The first day of the current month of Av began Sunday night. Although most Israeli believers do not (yet) celebrate Rosh Chodesh, the Lord spoke to me about its importance a few years ago. Finally, last Sunday night, I was blessed by a Messianic celebration of it here in the Land. (Interestingly, many satanists, wiccans and other dark spiritualists understand there is a spiritual reality associated with the new moon.)

Rosh Chodesh is one of the feasts of the Lord: “At the beginning of your months you shall present a burnt offering to the Lord…a grain offering…of a sweet aroma, an offering made by fire to the Lord [and] drink offering.” (Numbers 28:11-14)

First a little background before my story: Traditionally, a new month occurs when the first sliver of new moon becomes visible to the unaided human eye after dark. God wants us dedicating the month to Him with thanksgiving and praise. In ancient Israel, trumpets were blown and there was joyful gratitude for His faithfulness for both the past and upcoming cycle of time (Nu. 10:10, Ps. 81:3). The rabbis have long pointed out that the new moon is not really new, but re-newed. In meeting with God at this appointed time, intimacy with Him can be uniquely renewed from month to month.

Someday all nations will worship the Lord from one New Moon to the next (Is. 66:22-23). Perhaps that is why our New Moon celebration was organized and led by a Gentile believer living in our Ma’ale Adumim community. This brother brought together believing Gentiles and Jews as one new man to dedicate the month to Yeshua. As a kingdom of priests, we offered Him a sacrifice of praise and worship. Shofars and silver trumpets  were blown (that’s my daughter Tasha in the photo). God’s presence was amazing! I believe the celebration was actually an intercessory, prophetic act helping prepare the way of the Lord’s return.

God created the dimension of time as a gift unique to the earth realm. At certain appointed times or feasts, the Creator desires to meet with His people in a special way. He invites all New Covenant believers to engage with Him in Heaven’s rhythm and sanctify (redeem) the times.

Consider this: Not just in the past but in the future, after Messiah returns to rule the earth in glory from His Temple, you and I will uniquely encounter the Lord at the New Moon. “The gateway of the inner court … shall be shut … but … on the day of the New Moon it shall be opened …The people of the land shall worship at the entrance to this gateway before the Lord on … the New Moons” (Ezekiel 46:1-3). “It shall come to pass that from one New Moon to another … all flesh shall come to worship before Me, says the Lord” (Isaiah 66:23).

Why not prayerfully consider engaging with Him at this special feast now?

Your ticket for the: The New Moon