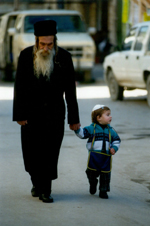 As most of you know, I spent part of December in Israel taking care of matters pertaining to our house of prayer and worship. It was an exhilarating time with the Lord, Who proved graciously present not only during times of dedicated ministry, but in the nitty-gritty of key relational and logistical issues. Yet, despite God’s goodness in the Land, the collective pain of His people pounded daily at my soul. One senses the tiny nation tottering as if trying desperately to brace itself on something, somewhere, somehow . . . some One. From that viewpoint, I share with you the following as we enter 2006.

Israelis are extremely battle-weary and disillusioned. The government seems to be slowly but tenaciously tearing itself to shreds, in significant part due to internal corruption, as well as to fiery contention over the “peace process.” Unilateral disengagement from Gaza has thus far resulted in the predictable: a less tangibly realistic hope for peace than ever. On a regular basis, rockets fire over from Gaza into the Western Negev and Ashkelon, while terrorists continue to strike (or get caught en route to their targets). One commentator likened the turning over of Israeli land to the Palestinians (who remain bent on Israel’s destruction) to tossing a tiger a steak in the hope it will turn vegetarian. Polls indicate that a majority of Israelis (against a vehemently opposing minority) now actually favors relinquishing Judea and Samaria. Nearly half are also pressing to hand over East Jerusalem. Such proposals would have been unfathomable a few years ago. Prime Minister Ariel Sharon has stated the US serves as prime mover for past and future major concessions. In just two days, Mr. Sharon will undergo a surgical procedure to repair a hole in his heart. May the God of Glory mercifully invade that hole with the knowledge of the Prince of Peace, the Prime Minister of all the earth.

Meanwhile, with virtually no protest from the nations, Iran calls for total annihilation of the Jewish State. It appears that ancient prince of Persia (Iran is modern-day Persia) will soon have the nuclear capacity to make “good” on its threat. Syria renews its murderous stance against Israel, democracy appears untenable in Iraq, and Egypt allows terrorists to freely cross into Gaza for the purpose of killing Jews. At the same time, the poverty rate in Israel escalates, shrinking the country’s middle class and stabilizing force.

Spiritually, sin abounds. In the streets of the Holy Land one sees those same detestable things embraced by the rest of the world: occult paraphernalia shops, flaunted sexual perversions, monuments to mammon, and all manner of human arrogance. To you who unconditionally love and pray for God’s chosen people, I share with heartfelt grief that we (Israel) are a people who have largely forsaken the Lord, worshiping foreign gods, loving (yet hating) ourselves. Of us it can be said, “My people have committed two sins: They have forsaken me, the spring of living water, and have dug their own cisterns, broken cisterns that cannot hold water.” (Jeremiah 2:13) Will you please join me, not in condemnation, but in intercessory prayer and tears for Israel?

Yet God has not forsaken us. “Did God reject His people? By no means! I am an Israelite myself….At the present time there is a remnant chosen by grace.” (Romans 11:1,5) Today there remains in Israel a growing remnant of God-lovers, Yeshua-worshipers, fiery believers following our Bridegroom King, often at great personal cost. House fellowships (churches) and more traditionally structured congregations are blossoming quantitatively and qualitatively. On Shabbat last month I visited the Messianic congregation in Beersheba, just a few miles from our house, and spent several hours fellowshipping with and encouraging the pastors. The following Shabbat, after I left the Land, that same congregation was ransacked by hundreds of rioting ultra-Orthodox Jews. Our countrymen were incensed that two Jewish believers were to be immersed (baptized) in the Name of Yeshua. Yet, despite mainstream Israel’s efforts to marginalize the remnant, bear in mind that true governmental authority in the Spirit rests on them. The remnant of Israel, not the secular or religious socio-political system, will carry the nation into its prophetic destiny.

As we enter 2006, we’re met with an uncanny synchronization of calendars. Christmas and Hanukkah, the Feast of Dedication, fell on the same date last month, as did New Year’s Eve and Rosh Chodesh, the biblical feast commemorating the new Jewish lunar month. New Year’s Day marked the full lighting of the traditional Hanukkah menorah, symbolizing fullness of dedication. Perhaps more than mere coincidence, the convergence of these hallmark dates may underscore a unique season of time in which Israel and the Church now share a common destiny. The season is likely to be one of glory amid gory. It may herald intensified birth pangs refining the Bride and preceding the return of our Bridegroom King. To what or to Whom will we dedicate ourselves as a new year’s resolution?

2005 is fast becoming known as the year of natural disasters. Some believers proclaim these to be the judgments of the Almighty for the nations’ mistreatment of Israel, particularly concerning the uprooting of Gaza and future territory. Others decry Israel’s own sin as the reason for her loss of land. Still other Christians regard these as birth pangs signaling Yeshua’s return. Many just chalk things up to the unpredictability of nature, a planet and atmosphere subject to implacable imperfections associated with the fall of humankind. I believe there is truth and validity to each perspective, the major shortcoming of each being its exclusion of the others. God’s ways are, by His design and purpose, beyond full human comprehension. We’ve glimpses; we’ve His holy written Word. Have we faith enough to trust He accomplishes many things at once? Could He not allow “nature to take its course”, at times demonically energized, for the sake of calling all to repentance? With a single stroke He grants mercy and passes judgment, simultaneously testing the hearts and intents of humanity, all the while purposing to magnetize us to Himself. Of what can we be sure during such times of shaking?

On a personal level, I’ve found much anointing on Psalm 46. The Spirit is breathing fresh life on these words for both Israel and the Church: “God is our refuge and strength, an ever-present help in trouble. Therefore we will not fear, though the earth give way and the mountains fall into the heart of the sea, though its waters roar and foam and the mountains quake with their surging. There is a river whose streams make glad the city of God, the holy place where the Most High dwells. God is within her, she will not fall; God will help her at break of day. Nations are in uproar, kingdoms fall; he lifts his voice, the earth melts. The Lord Almighty is with us; the God of Jacob is our fortress. Come and see the works of the Lord, the desolations he has brought on the earth. He makes wars cease to the ends of the earth; he breaks the bow and shatters the spear, he burns the shields with fire. ‘Be still, and know that I am God; I will be exalted among the nations, I will be exalted in the earth.’ The Lord Almighty is with us; the God of Jacob is our fortress.”

Note the last phrase: “The God of Jacob is our fortress.” During this season of synchronization, this time of living out Israel and the Church’s shared prophetic destiny, we will see a restoration of faith in God as the God of Jacob. The God of Jacob is the God of our Jewish fathers, the God of the Hebrews—not the Hellenists. Hebrew roots of our faith will be restored, uprooting many traditions of men, especially hellenistic, Greco-pagan traditions that have infused or replaced our Biblical heritage.

Even more exciting is this impending reality from verse 10: “I will be exalted among the nations, I will be exalted in the earth.” Our Beloved, the Uncreated Sovereign, will be exalted. It’s harvest time! So though I weep with those who weep, especially among my Jewish people, I revel in the opportunity to mediate the Way, the Truth and the Life to them. Many Israeli hearts are tenderizing, resonating to those who will communicate an intimate knowledge of the God of their fathers. As their false gods fail and fall, He will be exalted among His ancient covenant people. Whether in Israel or any other nation, it is a season to exult in His exaltation. Weep with those who suffer tragedy. But exult in prayer and praise, in extending deeds of mercy to those in need, in sharing the good news that the kingdom of God is at hand, and in surrendering your all to Him in love. Then surely it will be a happy new year.

Your ticket for the: Israel’s Spiritual Climate Entering 2006