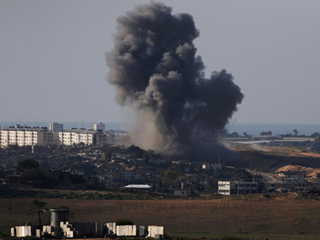 See how Your enemies are astir, how Your foes rear their heads. With cunning they conspire against Your people; they plot against those You cherish. “Come,” they say, “let us destroy them as a nation, that the name of Israel be remembered no more.” … May they ever be ashamed and dismayed; may they perish in disgrace. Let them know that You, whose name is the Lord—that You alone are the Most High over all the earth. (Psalm 83:2-4,17-18)

For eight years Israeli civilians living in the Western Negev, particularly Sderot, have been victims of terrorist rocket fire from Gaza. After the Israeli evacuation of Gaza in August 2005, the number of rocket attacks increased greatly. In 2006 the terrorist organization Hamas gained an elected majority in the Palestinian Legislative Council, legitimizing their terrorist ideology. In June 2007, Hamas completed a bloody military coup in Gaza, ousting the US backed Fatah government of Mahmoud Abbas. It then instituted Muslim military and sha’aria law, and increased terrorist actions against Israel. In June 2008 a hudna truce was negotiated between Israel and Hamas, which Hamas violated repeatedly. On December 19, 2008, Hamas terror attacks aimed at Israeli civilians dramatically increased to several dozen on a daily basis. On December 27th and after enduring hundreds of attacks from Hamas, Israel began Operation Cast Lead to dismantle known terror nests.

Operation Cast Lead opened with a series of precision air strikes in Gaza designed to destroy rocket storage and launching sites, as well as individual Hamas murderer-leaders. Unlike Hamas, which aims its attacks on innocent Israeli civilians, Israel specifically attempts to avoid civilian casualties. Prior to the assault, Israel warned Gaza’s civilians by radio and TV, dropped leaflets from the air, and telephoned locations adjacent to bombing sites to urge any civilians and innocents to leave targeted locations. Most did not leave, per Hamas’ strategy to have them stay and serve as martyrs and media ploys for allegations of “disproportionate use of power” on the part of Israel. Meanwhile, Israel has allowed numerous humanitarian aid shipments into Gaza since the start of the war.

On January 3, Israel began a ground offensive into Gaza, a measure necessary to stem the tide of mounting terror aimed at 10 percent of the Jewish nation. At this writing, most predict the war will wage on for a prolonged period of time, despite international calls for a truce.

Israel named its current operation Cast Lead because the incursion began during Hanukkah, and certain ancient Hanukkah implements were cast from lead. Pray that God would grace Israel’s leaders and warriors with the wisdom, courage, moral fortitude and spirit of the Maccabbees responsible for the Hanukkah victory of old.

The terror organization Hezbollah in Lebanon and elsewhere north of Israel is threatening to join the fray since they, along with Hamas, share the goal of destroying Israel. Pray that Hezbollah does not align militarily with Hamas, that God be the One to judge them. Pray for disunity and confusion among Israel’s enemies.

According to Psalm 83, when Israel’s enemies align to destroy her, His purpose is to exalt Himself above their gods and demonstrate that He alone is God over all the earth. Pray for the salvation of Israelis, Gazans, and Muslims through His supernatural intervention.

Pray specifically for the dozens of Messianic Jewish soldiers who are fighting in Gaza, for anointing with the spirit of David, a warrior who was above all a lover of God. Pray protection over them and opportunities to share the Gospel with fellow soldiers.

Israeli national elections are scheduled for next month. Please pray for the candidates most amenable to the mind of the Holy Spirit, and who are most soft-hearted toward His will, to be elected prime minister and members of the Knesset .

We are not pro-war, but we are pro-life. Sadly, but realistically and prophetically, until the Lord returns, there will be times spiritual and natural warfare must be used against our enemy who steals, kills and destroys. If you are interested in gaining further perspective on the nature of this and upcoming wars in Israel, you may click here to obtain a copy of Sandy’s new book on the subject, Israel’s Anointing: Your Inheritance and End-Time Destiny through Israel. If you are interested in learning how to help Israel in its media battle during Operation Cast Lead, click here to link to a secular Jewish organization dedicated to this purpose.

Pray for the peace of Jerusalem: May those who love her be secure.
(Psalm 122:6)

Your ticket for the: Hamas – Israel War January 2009