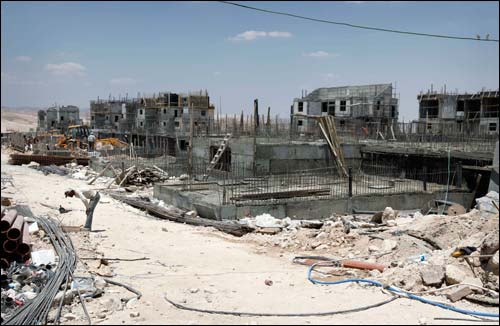 Many issues, as you know, complicate the Arab-Palestinian/Israeli conflict. Recently the Palestinians, supported by the present US administration, have voiced strenuous opposition to certain Israeli building construction. They have insisted that Israel cease all residential and commercial construction in areas the Palestinians view as part of their future state. This was stated as their precondition to resume peace negotiations with Israel.

For the sake of those who understandably do not understand this complex matter, we provide a concise, hopefully objective, clarification below. To keep the length manageable, this summary necessarily oversimplifies some issues. At the same time, we omit other issues, which though related, are not essential to a basic understanding of the topic. Please bear in mind that while we report an historical and factual, on-the-ground summary, we believe the conflict is at its foundation spiritual. We also encourage an attitude of compassion toward genuine Palestinian suffering. Thankfully, we’re assured of Yahweh’s ultimate victory.

Essential Background
In 1920, the League of Nations (predecessor of the United Nations), established a future (so-called “Mandatory”) Jewish state known as Palestine. The Arabs protested violently against the inception of this Jewish state. As a result, 78 percent of the land allotted by international law for a Jewish state was given to the Arabs in 1922 in order to establish the nation known today as Jordan. Hence Jordan can legitimately be called a Palestinian state.

In 1947 the UN partitioned the remaining sliver of land known as Palestine into a Jewish state and yet another, second proposed Arab state. According to the plan, Jerusalem would be an internationally governed city. Judea and Samaria were offered to the Arabs as part of this independent Palestinian state. The Arabs flatly rejected the offer, wanting the whole of Palestine or nothing at all. This ultimate goal, according to their own media outlets, has not changed. Because the Palestinian Arabs rejected the 1947 UN Partition Plan, the land offered them, under normal principles of international law, became “terra nullius,” or land belonging to no one, over which sovereignty could be acquired by occupation. (Behind the facts, one can see the hand of God.) 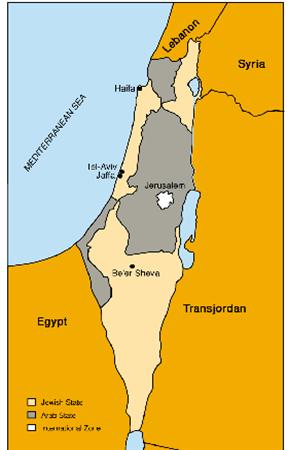 In the adjacent map, the territory the UN offered the Jews is seen in beige, and the land offered to the Arabs is colored gray. Israel accepted the UN Partition Plan and on May 14, 1948, declared itself a sovereign Jewish state based on those borders.

The next day, five Arab armies, joined by numerous irregulars, attacked Israel in attempt to annihilate it. At the end of this clearly defensive War of Independence, Israel gained ground—legally according to international law. Her expanded territory, based on the 1949 armistice lines, is colored beige in the map below. It includes some of the land previously offered by the UN to the Arabs but rendered essentially “owner-less” due to their rejection of the offer. 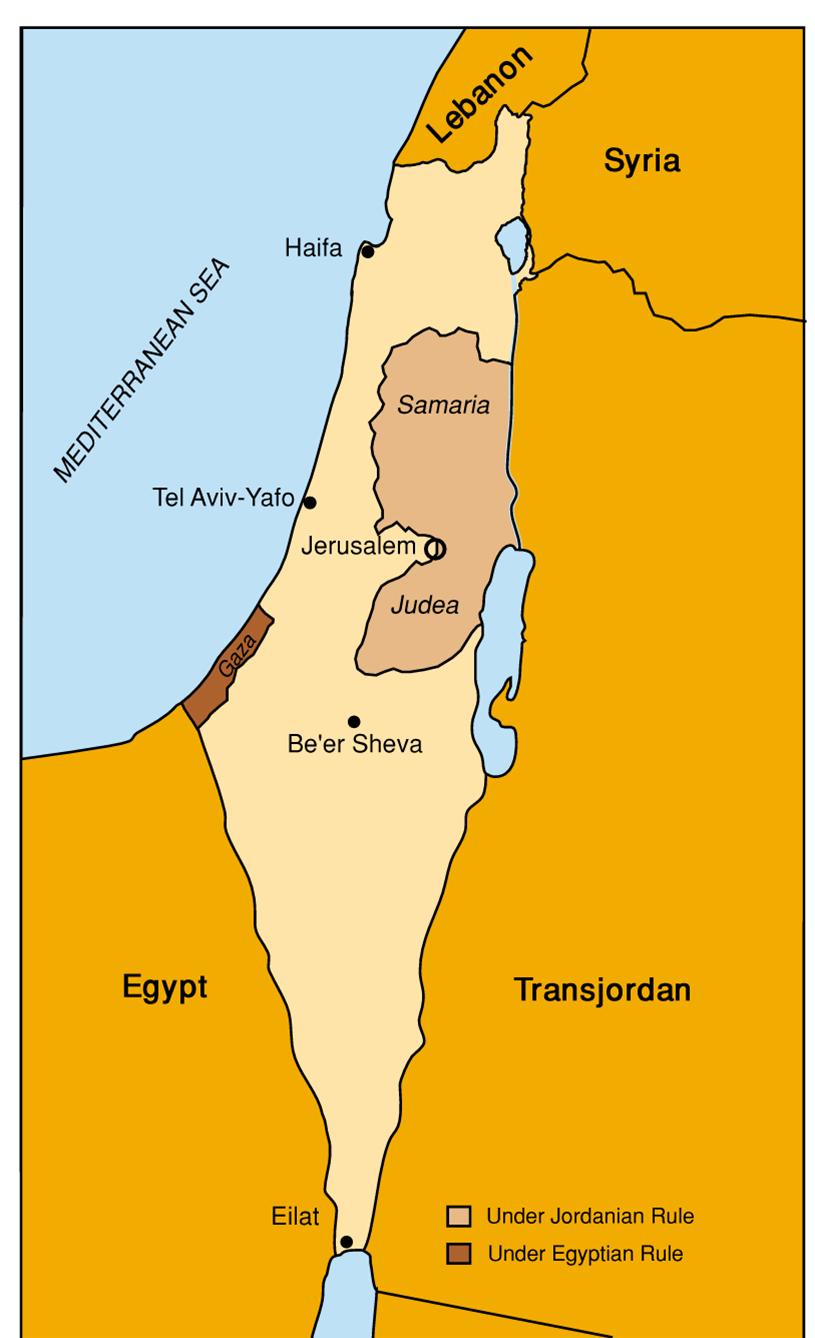 At the same time, right after the war, Jordan illegally annexed Judea and Samaria, as well as East Jerusalem and the entire Old City, as seen in tan in the adjacent map. Jordan’s annexation was illegal because it was militarily offensive, not defensive, in nature. Jordan did not grant citizenship to the residents of Judea and Samaria, as part of the ongoing pan-Arab plan to annihilate Israel.

Up until 1967, Judea and Samaria (sometimes called the West Bank), the entire Old City of Jerusalem and East Jerusalem were controlled by Jordan. Jews were not allowed in those areas. In 1967, Jordan again attacked Israel during the Six Day War. The result of this war was that Israel legally liberated Judea, Samaria, East Jerusalem and the Old City from Jordan. (In this war Israel also liberated Gaza and the Sinai from Egypt, and the Golan Heights from Syria. The Sinai was returned to Egypt in 1979 in return for a promise of peace, and all Jews were evacuated from Gaza in 2005 in return for nothing.) In 1988 Jordan renounced its claims on Judea and Samaria, although the Palestinian and Jordanian peoples are generally one and the same historically and demographically.

Current Construction Conflict
Concern over Israeli settlement construction is not a new issue, although it has achieved new prominence during the current US administration. The Israeli construction now in dispute can be broadly categorized into two groups. For the sake of this discussion only, we will call the groups Zone 1 and Zone 2. Zone 1 construction can be considered anything in the Jerusalem metropolitan area. Zone 2 encompasses building in Judea and Samaria. The Palestinians allege that building in either zone, referred to as “settlements”, is reason enough for them to withdraw from peace negotiations with Israel. In response to this concern and continued pressure from the US, and in hopes of jump-starting negotiations with the Palestinians, Israel recently agreed to place a moratorium on new residential construction in Zone 2.

In his recent announcement of a 10 month moratorium (or freeze) on construction, Prime Minister Netanyahu went further than any Israeli prime minister in giving in to Palestinian demands on this matter. Many Israelis strongly disagree with his decision.The immediate Palestinian response, however, is that this is still not enough. As of this writing, they remain unwilling to resume peace negotiations.Their response is interpreted by many Israelis to show their dispute with Israel is not about the location of Israeli construction, but rather over the fact that Israel exists and has any Jewish land space whatsoever.

While announcing the moratorium in Judea and Samaria, PM Netanyahu reiterated the policy of previous governments in refusing to consider a construction freeze in Jerusalem. At this time, the Zone 1 controversy is largely over one Jewish Jerusalem neighborhood, specifically Gilo. However, the future of Gilo could well determine the future of several other large and well-established Jewish neighborhoods in Jerusalem by way of precedent setting. 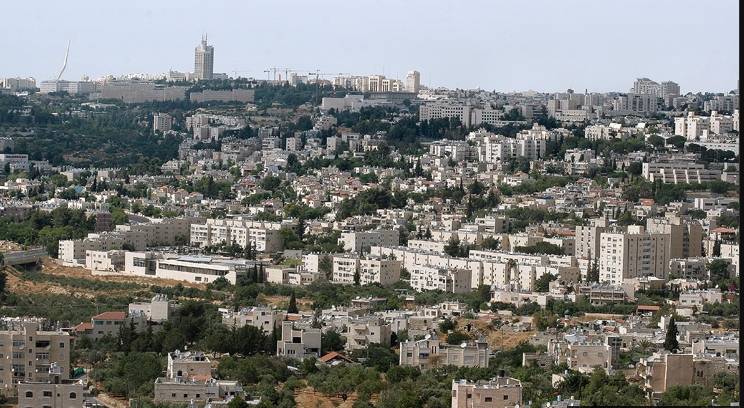 Gilo
Gilo is a full-service residential neighborhood in the southwestern edge of Jerusalem, built well before 1947. It is not in East Jerusalem. However, it is targeted by the Palestinians because it is located over the 1949 Armistice Line. Recall that this is land the Palestinians declined to accept as a state and thus became a no-man’s-land.

Gilo is not a “settlement” in the correct usage of the term, which can conjure up images of isolated and illegal enclaves in the desert wilderness. Rather, Gilo lies within Jerusalem’s municipal boundaries, houses 40,000 residents, and is geographically contiguous to surrounding Jewish neighborhoods which pre-date the Six Day War. In a sense, Gilo is to Jerusalem what Brooklyn, Queens or Long Island are to Manhattan. The United States has in the past refrained from classifying Gilo and other “disputed” locales as settlements, referring more accurately to them as neighborhoods. The Obama administration is the first to label Gilo an East Jerusalem settlement. Israel maintains it has the legal right to build freely in Gilo because it is part of the municipality of Jerusalem, and separate from what we are calling Zone 2 settlements. According to a Jerusalem Post article of November 22, 2009 by Maurice Ostroff, “It is highly relevant that the Oslo Accords do not require any freeze of building activity and even the Road Map, which was never formally ratified, speaks only of dismantling ‘outposts’ erected since March 2001, a far cry from Gilo, that has been a residential suburb of Jerusalem since 1971.”

Ma’ale Adumim
The city of Ma’ale Adumim, home to 35,000 residents, lies a mere 3 miles east of Jerusalem proper. Built well before the Oslo Accords and surrounded by desert, it is a suburban area technically located in Judea (Zone 2, for purposes of this discussion.). Because Ma’ale Adumim is located near the Judea-Samaria border, the Palestinians regard it as a major threat to the territorial contiguity of a future Palestinian state. Israel does not desire to evacuate Ma’ale Adumim as it did Gaza. Instead, Israel offers to build a highway like those used daily by countless Jews (including us) to avoid driving through hostile Arab areas, which would allow Palestinian Arabs unfettered access to their cities. Ma’ale Adumim is expected to remain under Israeli control in future agreements with the Palestinian Authority. Israel offered the Palestinians land within Israel “proper” to offset the area of Ma’ale Adumim, but they rejected the offer.

Like Gilo, Ma’ale Adumim is regarded by the UN as illegal under international law, specifically, Article 49 of the Fourth Geneva Convention. Article 49 prohibits an occupying power from transferring its citizens onto lands that it conquered. (This explains the frequent claim of Israeli occupied territories.) Israel argues this Article does not apply to Judea and Samaria, however, because Israel legally took, or liberated, those territories in 1967 as a result of their defensive war against a country (Jordan) which had illegally occupied them since 1948. (This argument is separate and apart from many others that can be made on behalf of Israel’s not relinquishing further land to the Palestinians at this time, including but not limited to the Bible.)

East Jerusalem
Similarly, East Jerusalem came into Israel’s possession in the course of a defensive war (the Six Day War of 1967). Therefore, under principles of international law, Israel was legally entitled to annex it and create a united Jerusalem. As a gesture of good will, however, Israel quickly handed control of the Temple Mount to local Muslim authorities. (Israel, by the way, now regrets this gesture.) In any case, the Jerusalem City Council has jurisdiction over building approvals for Jewish and Arab residence in any part of the city. The Arab homes which the city is taking down in East Jerusalem are few in number. They were built without obtaining any of the necessary legal permits. Any Jewish construction without a city permit is similarly illegal in Jerusalem and would be taken down.

We’ve had occasion to personally see some of these Arab homes slated for demolition. They typically constitute a hazard to public health based on their poor construction, extreme overcrowding, serious lack of maintenance, and other violations of residential zoning laws. Admittedly, affordable and available housing is a problem for both Arab and Jewish residents of Jerusalem. For that reason, the city is approving construction projects for Jews, as well as for Arabs, in East Jerusalem. 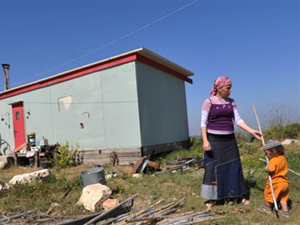 Jewish Settlements Deemed Illegal by the State of Israel
A number of Jewish settlements in Zone 2 are deemed illegal by the State of Israel. These hastily built shacks or mobile homes are typically erected by right-wing Israelis in defiance of civil authorities. Such settlements, constructed without permits, are regularly removed by the government. In practicality, the situation is somewhat similar to the government’s removal of illegally built Arab homes in East Jerusalem.

Conclusion
Israel resides within borders far smaller than those originally envisioned for it by the international community. Those additional lands which Israel obtained through a series of defensive wars were legally taken according to generally accepted principles of international law. Consequently, the Israeli-Palestinian dispute over building and construction would appear to be at its heart about other matters. We suggest the dispute hinges on whether the Arabs are willing to recognize the legitimacy of Israel as a Jewish state within any boundaries. Israel does not want to render the Palestinian Arabs homeless, or confine them to substandard living conditions. Every Israeli government has sincerely tried to achieve peace with its neighboring people groups. From a biblical perspective, the dispute is about God’s end-times restoration of the Jewish people to the Promised Land, with the coming of Messiah at its glorious climax.

“O God, do not keep silent; be not quiet, O God, be not still. See how your enemies Are astir, how your foes rear their heads. …’Come,’ they say, ‘let us destroy them as a nation, that the name of Israel be remembered no more.’ … Cover their faces with shame so that men will seek your name, O Lord. … Let them know that you, whose name is the Lord—that you alone are the Most High over all the earth.” (Psalm 83:1,2,4,16, 18)