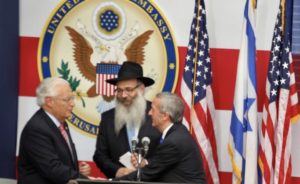 During the past week of Shavuot/Pentecost, and as Israel marked her 70th anniversary, the embassies of the United States, Guatemala and Paraguay relocated to Jerusalem. These signpost events were historic. As they took place, the local spiritual atmosphere seemed to suddenly, simultaneously shift.

Israelis acknowledge that the relocation of foreign embassies is largely the work of evangelical Christians. Almost overnight, the predilection of many toward evangelicals spiked to a new high. At the same time, some Christians began to anticipate the near fulfillment of Isaiah 62:7, with Jerusalem becoming the praise — not problem — of all the earth. Other believers, sobered by Israel’s recent military confrontation with Iran, are predicting major war in the near future. Given the wide diversity of opinion among Bible believers, is it possible to interpret the watershed events of recent days from a perspective based on the Scripture as a whole?

In attempting to offer a balanced view of recent events, this article summarizes some of the many highlights I was graced to witness this week. It includes mostly observations, comments, and more subjective perceptions by the Spirit. A few key, Scriptural parameters are suggested. Part 2 of this 2-part series will focus much more on a biblical overview.

In summary, the relocation of the US Embassy to Jerusalem appears to have facilitated a strengthening of the governance of God in this city — and likely beyond. To be sure, the American government is not the same as God’s government. However, as the most powerful nation on earth today, America’s tangible recognition of Jerusalem may herald or reflect a new alignment with God’s Kingdom in the earth realm. Such realignment might be expected to release a greater dimension of Kingdom reality among the nations, expressed in part by two embassies relocating just days later. Conflict between the Kingdom of God and kingdoms of this world may increase due to push back by God’s enemies, but in the process, a powerful wave of evangelism may be released internationally.

What could be prophetically unfolding — and not unfolding?

Notice that several preconditions in the passage above do not yet appear to have been met — at least not according to a straightforward or literal interpretation. Not all of Israel dwells securely and in safety at this time. Citizens in the north and south periodically endure missile and rocket attacks. Intelligence, army and police forces must daily thwart terror in other parts of the country. Accordingly, Israel is not a “land of villages without walls.” The more than decade old security fence protecting her from Palestinian terror is called a separation wall by her enemies. Fences requiring bars and gates are still needed to shield Israeli borders and internal villages. The main reason our enemies attack us today is not to plunder our resources or wealth. They seek to attack us in order to destroy the Jewish nation due to Islamist or humanist driven hate or ideology. The current, violently ongoing hate seems different from the attack motive of Ezekiel 38:10. In that passage a more sudden, almost random thought from out of the blue inspires an unexpected invasion.

I could be mistaken, but I do not believe the apocalyptic battle of Ezekiel 38-39 is at hand. God’s enemies may try to instigate such an event prematurely. But as His people pray, His enemies’ schemes will fail. (Isaiah 8:10, Psalm 33:10-12)

I believe a great harvest of souls from Israel and the nations awaits. This gracious period of harvest could last only a few, short years — or longer. In any case, I feel we “must do the works of Him who sent [us] while it is still day; the night is coming when no one can work.” (John 9:4) Thank you to all who join in the joyful work!

Your ticket for the: Alignment with Jerusalem: The 70 Year Shift Has Begun