Reaffirming the Decree for Israel’s Restoration: Reviving the Balfour Declaration of November 2, 1917 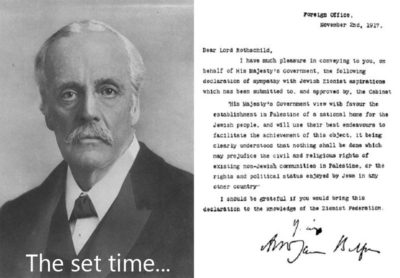 This week marks the anniversaries of two historic, global level declarations that released Kingdom of God transformation in the earth. Courageous words penned by Martin Luther changed the Church worldwide; those of Lord Arthur Balfour altered the course of Jewish history forever. You and I are privileged to run in the wake of both Spirit-breathed decrees. At the same time we’ve been entrusted, whether we know it or not, with the high call to revive the reality of both declarations for our generation. But to do so, we must first know what they are.

Five hundred years ago on October 31, 1517, Martin Luther nailed his “95 Theses” to a church door in Wittenberg, Germany. History regards this event as the launch of the Protestant Reformation. The Reformation set into motion a much needed, biblical restoration to the Church. Centuries later on November 2, 1917, Great Britain issued the lesser known Balfour Declaration. In 2017, the Balfour Declaration represents a (perhaps, the) foundational, international decree launching the restoration of Israel. Not long thereafter, it gave rise to the UN’s recognition of today’s regathered Jewish state.

The two decrees, each based firmly on Scripture, are not unrelated. Together they have brought about an incomparable expansion of God’s redemptive plans for humankind—despite mistakes in each. Perhaps for that reason, values reflected in both are now contested or rejected by much of the world. The assault is so great that some believe Western civilization itself could actually be at stake. Therefore, as we observe the anniversary of these world changing decrees, it is appropriate to intentionally revisit, verbally reaffirm, and by our actions, renew God’s purposes embodied in each.

Why, you may ask, is that so important? Because we want revival in Israel and the nations!

Information on the Protestant Reform can be accessed easily online, especially this week. The Balfour Declaration remains a bit more obscure. The document is an official policy statement signed by British Foreign Secretary Lord Balfour to Baron Walter Rothschild, a prominent representative of the nascent Zionist movement. It states, “His Majesty’s Government view with favor the establishment in Palestine of a national home for the Jewish people, and will use their best endeavors to facilitate the achievement of this object, it being clearly understood that nothing shall be done which may prejudice the civil and religious rights of existing non-Jewish communities in Palestine or the rights and political status enjoyed by Jews in any other country.”  These 67 words changed the world.

The Balfour Declaration can be seen as setting into motion a fulfillment of two milepost, prophetic Scriptures: “You will arise and have compassion on Zion, for it is time to show favor to her; the appointed time has come.” (Psalm 102:13) “Hear the Word of the Lord, you nations; proclaim it in distant coastlands, ‘He who scattered Israel will gather them and watch over His flock like a shepherd.'” (Jeremiah 31:10) Not coincidentally, Lord Balfour was a Bible believer fondly disposed toward the Jews. But he did not operate in a vacuum. Behind the scenes, Jewish and Christian Zionists, ordinary people like you and me, were praying and working tirelessly to turn the tide toward God’s purposes for His ancient covenant people. By His gracious favor, they established good relations with political and other leaders of faith not only in Great Britain, but key nations in Europe, Asia and North America. They set an example for us today.

As they dreamed, strategized and labored, World War I was coming to a close. Allied victory was practically certain. It was clear that European nations, especially England and France, would imminently defeat and dismantle the Ottoman Turkish Empire. This would free much of the Middle East from the Muslim caliphate imposed on it by colonial Turkish rule. The timing of these global events converged with the Zionist vision. God was at work.

The future of the conquered lands of the Middle East was of global significance. Rather than indefinitely colonize the region, Western nations decided to establish temporary governing trusts, called mandates, in the newly acquired areas. At least in principle, they aimed to establish self-determining and indigenous governments—and then leave. History shows, however, the Allies operated from mixed motives, not the least of which pertained to oil. In any case, it was in this broad international context of shifts throughout the Middle East that the Allied nations supported and affirmed Britain’s pledge for a restored Jewish homeland. Collectively, their stated reasons were the Jews’ ancestral rights to the land, demands of moral justice and principles of international law.

For the Arabs, meanwhile, the Allies created the mandate nations of Lebanon, Syria and Iraq. Not long thereafter, Great Britain gave away nearly 80% of Jewish mandated land to the Arabs. This they did specifically to create a Palestinian Arab state called Transjordan, now known as Jordan. The unilateral move proved an unsuccessful effort to appease the Arabs’ collective revolt against any Jewish homeland in the Middle East. But that is another story.

The Allies memorialized their plan for the Middle East in the San Remo Resolution of 1920. It would be administered under the authority of their newly formed international organization, the League of Nations. Most importantly for our purposes in this post, the League of Nations adopted the Balfour Declaration via the San Remo Resolution. Then, in 1947, the United Nations succeeded the League of Nations. By international law, the UN was required to adopt all policies previously adopted by the League of Nations. Therefore, the UN was—and still is—legally bound to the terms of the Balfour Declaration. Knowingly or unknowingly, the UN has covenantally decreed the set time to favor Zion has come. (November 29, 2017 will mark 70 years since the UN formally offered the Jewish people a mandate-administered, national homeland. This represents another key anniversary.)

As you might imagine, Israel’s opposers and detractors have relentlessly tried to discredit the Balfour Declaration. Last year, PA President Abbas demanded that Britain apologize for the document, invalidate it, or both. But Balfour was never just about Britain, and Abbas succeeded mostly in embarrassing himself.

Historian Martin Kramer comments, “It is important to realize the Balfour Declaration was not the isolated act of one nation. It was approved in advance by the Allied powers, whose consensus then constituted the only source of international legitimacy. Before Balfour signed his declaration, leaders and statesmen of other democratic nations signed their names on similar letters and assurances. The Balfour Declaration anticipated a world regulated by a [group] of principal powers—the same world that, 30 years later, would pass a UN resolution legitimating … a Jewish state.” (1)

Balfour’s centennial is therefore a key time to remind governments of their shared responsibility for Britain’s pledge to seek to establish a Jewish state. As Kramer points out, “the United States, France, Italy, China, Japan and even the Pope [Benedict XV] were allied with England’s aspirations….It is important for Israel’s ambassadors and friends to speak openly of the historic role of these nations in bringing about Balfour.” (2)

The American role deserves particular emphasis. Few Americans know that President Woodrow Wilson approved the Balfour Declaration in advance, or that his approval had a decisive effect in the British cabinet. In addition, the United States President strongly supported the League of Nations and its mandate for a Jewish state. As an additional measure, the US Congress passed a joint resolution (the Lodge-Fish Resolution) that reproduced the exact text of the Balfour Declaration in 1922 (“the United States of America favors the establishment in Palestine,” etc.). President Warren Harding signed this resolution the following September. It is worth noting that none of these events were influenced by the Nazi Holocaust, which had not yet occurred.

This week and throughout Balfour’s centennial year, we can gratefully reaffirm, revive and reassert the terms of this foundational decree. It is time to declare again, in the authority of Holy Spirit, favor toward Zion as prophesied in Psalm 102:13 and international cooperation as in Jeremiah 31:10. If you ask, God may show you creative ways in which to bless your nation and the Jewish people in remembrance of Balfour. Or He may ask you to simply pray with renewed focus into Israel’s full restoration.

Why? Because He wants revival in Israel and the nations—and I suspect you do, too.

David Gefen, “The Centennial of the Balfour Declaration,” published in “In Jerusalem,” The Jerusalem Post, October 27, 2017, 8-9.

Your ticket for the: Reaffirming the Decree for Israel’s Restoration: Reviving the Balfour Declaration of November 2, 1917

Reaffirming the Decree for Israel’s Restoration: Reviving the Balfour Declaration of November 2, 1917