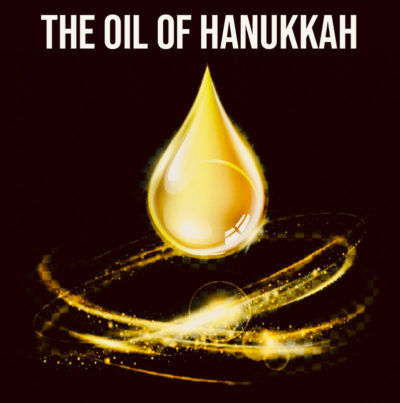 ARTICLE SUMMARY: Hanukkah recounts the miraculous victory of a tiny Maccabean army of warrior priests over the mighty Selucid-Greek Empire in 165 BC. A second, presumed event generally regarded as equally miraculous, celebrates that a minute amount of holy oil kept the fire of God’s lampstand burning for eight days. Today the Holy Spirit wants to keep His fire supernaturally burning in you and me. By the oil of His Spirit, He will empower us for battles of this age resembling those of the Maccabees. (For a foundational overview on Hanukkah, including its relationship to Sukkot and prophecies in Daniel, click here.)

When the Maccabees regained Jerusalem, they began cleansing the heinously defiled Second Temple. Early in the process they discovered a small cruse (jar) of oil with which to light the menorah (lampstand). God had instructed that only “clear oil of beaten olives for the light, to make the lamp burn always” could be used. (Exodus 27:20, Leviticus 24:2) The Scriptural preparation of holy oil was a lengthy process, taking eight full days. Once purified, the oil was poured into a jar, closed with a priestly seal and carefully set aside.

That even one cruse of oil had survived the Temple’s riotous desecration signaled to the Jewish people God’s supernatural, loving provision. That this same oil presumably burned for eight days – the exact time needed for preparing more oil to keep the fire burning – was seen as miraculous.

The earliest recorded account of the oil miracle appears in the Talmud, about 600 years after the events described in the Books of the Maccabees. The Talmud is a collection of rabbinic discussions, debates, insights, historical accounts and legends. It is not the inspired Word of God. Some Talmudic teachings can be spiritually edifying but others clearly are not. Therefore, while traditional Judaism generally regards the Hanukkah oil story as accepted fact, it should not be given the same weight as Scripture. What Scripture does strongly suggest about Hanukkah (“Feast of Dedication”) is that Yeshua observed it along with the other Jews of His day. The direct reference to Messiah at Hanukkah reflects a degree of New Covenant significance for believers today. (John 10:22-23)

The Talmudic text describing the oil of Hanukkah miracle reads as follows: “What is the point of Hanukkah? It is in line with what our rabbis have taught…On the 25th day of Kislev, the days of Hanukkah, which are eight, begin….For when the Greeks entered the sanctuary, they made all of the oil that was in the sanctuary unclean. But when … they [the Maccabees] conquered them, they searched but found only a single jar of oil, lying with the seal of the high priest. But that jar had enough oil only for a single day. But there was a miracle done with it and they lit the lamp with it for eight days.” (b. Shabbat 21b, The Babylonian Talmud: A Translation and Commentary.)

What could the mystery of the oil of Hanukkah mean for believers today?  First, there is the celebration of God’s gracious and miraculous, historic victory over His enemies who sought to annihilate the Jews. Had the Hanukkah miracle never taken place, our Messiah and Savior would never have been born. Second, there is the traditional and possibly very real, inspirational miracle of the oil of Hanukkah. Third, Hanukkah is a set time by which you can – and perhaps should – celebrate the miracle of the oil of the Spirit which keeps the fire of God’s lampstand burning within you. Hanukkah is a time to press in with faith for Him to revive and fan those flames of holy love, “beaten” into purity, within you.

God told His people the menorah fire was to stay continuously lit, fueled daily by fresh oil. He blessed this command as “a statute forever” throughout our generations “on behalf of the children of Israel.” (Exodus 27:21, JPS) Similarly, you and I need daily, fresh Holy Spirit oil to keep our lampstands burning. As in the Hanukkah story, God is faithful to secure and provide the oil you need, supernaturally, at the right time, at all times. One small cruse of oil from heaven can reignite the fire within, cleansing you anew. Because your body is a cleansed temple of God’s Spirit, Hanukkah is also a time to rededicate your flesh-and-blood temple to Him. (1 Corinthians 6:19)

There is even more. The armies overcome by the Maccabees were, at their core, driven by a spirit of anti-Messiah/anti-Christ.Though Maccabee means “Hammer,” these ancient, courageous Jews were not highly trained warriors. Their leaders were actually priests anointed to serve in God’s Temple. It was zeal for their Father’s House that consumed them, propelling them to victory. Their battle was won not by might or power, but by the Spirit of God. (Zechariah 4:6)

Many of the battles you and I fight today are driven by an anti-Messiah spirit not unlike that which the Maccabeean priests had to face. As a New Covenant priesthood you can take courage and gain faith from their example. (1 Peter 2:9) You will overcome not by human might or power, but by the same Holy Spirit as the Maccabees. In truth, God offers you even more than He did them. He offers you not just one small cruse of oil, but “His Spirit without measure.” (John 3:34) So receive the oil of Hanukkah! You need it in these last days. And Israel is waiting to see that holy oil, the Light of the World, burn powerfully in you.

Your ticket for the: THE OIL OF HANUKKAH