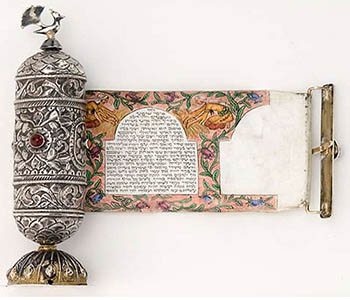 The festival of Purim occurs on the 14th day of the Hebrew month of Adar, which corresponds this year to March 20th. Purim (meaning “lots”) is a celebration of God’s deliverance of the Jews from destruction at the hands of the Persians thousands of years ago. It is based on the events recounted in the book of Esther.

Esther and her Uncle Mordecai were Jews living in Persia during the reign of King Ahaseurus. Haman was an evil advisor to the king who was bent on annihilating the Jews, in large part because Mordecai would not bow down and worship him. The humble and lovely young Esther had become Queen of Persia, although it was not known to the king or Haman that she was Jewish. Mordecai, who himself was a man to whom the king was indebted, learned of Haman’s plot to kill all the Jews of Persia on the 13th of Adar. Mordecai convinced Esther that the fate of the Jewish people depended on her interceding on their behalf with the king. “Do not think that because you are in the king’s house,” he told her, “you alone of all the Jews will escape. For if you remain silent at this time, relief and deliverance for the Jews will arise from another place, but you and your father’s family will perish. And who knows but that you have come to royal position for such a time as this?” (Esther 4:13-14)

Esther responded to Mordecai, “Go, gather together all the Jews who are in Susa, and fast for me. Do not eat or drink for three days, night or day. I and my maids will fast as you do. When this is done, I will go to the king, even though it is against the law. And if I perish, I perish.” (Esther 4:16)

Esther revealed Haman’s plot to the king, who subsequently executed Haman and his sons on the very gallows Haman had built to hang Mordecai. The plot of annihilation was foiled.

Grievously, however, the spirit of Haman which seeks to destroy the Jews is still alive and active today. Israel continues to live under the threat of terror from within and anti-Semitism worldwide continues to escalate. How are Christian believers to respond? In the spirit of Esther and Mordecai.

Across the globe God is raising up and grooming “Esthers” who will stand before kings—and The King—in humble authority to intercede on behalf of the Jewish people. It must be so. For if the Esthers of the Church keep silent, God will ensure that relief and deliverance for the Jews arises nonetheless. But the Church will perish in that she will diminish in her calling before God.

God is also looking for Mordecais—believers full of wisdom who are willing to groom, prepare and advise the Esthers of our day. His promise, “I will bless them who bless you [the Jews] and curse those who curse you” (Genesis 3:12) is as true today as when first uttered to the patriarchs. Christian friend, who knows but that you have come to royal position in the kingdom for such a time as this?!

This year, believers worldwide are joining with the Jewish people in the annual three-day “Esther fast.” As Esther called for a three-day fast before she approached the king on behalf of her people, so too the King’s people today can abstain from food and drink the 3 days prior to Purim. Approach Him this Purim on behalf of the Jewish nation. Because of His own sacrifice, the King will meet you with favor and grace.

Your ticket for the: Biblical Feasts: Purim