Happy Feast of Tabernacles from Jerusalem 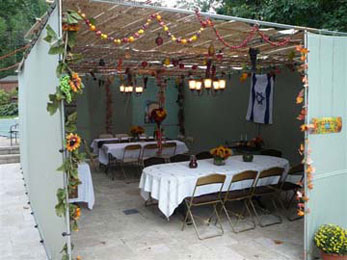 Today we celebrate Sukkot (Tabernacles), the most joyful of the seven biblical feasts (Leviticus 23:33-44). The mood here is festive as families gather throughout the city in small huts, eating, drinking and filling the streets of Jerusalem with songs of praise. A tangible reminder of God’s provision for us in the wilderness, Sukkot also prophetically foreshadows Yeshua’s tabernacling with us in the Messianic Age. With the onset of the feast, His Presence already punctuates the atmosphere.

In our corporate intercession yesterday, a word came forth for Jerusalem this Sukkot from Isaiah 61 (the entire chapter). We believe the same word may apply at this season to many of God’s grafted-in sons and daughters in the nations. Layers of meaning reside deep in the verses of Isaiah 61. I encourage you to read it anew this week with Holy Spirit-filled expectation.

The verses below are just a sampling of the prayer direction we received. The entire chapter carries fresh vibrancy for the Feast of Tabernacles 5772.

“He has sent me … to proclaim liberty to the captives, and the opening of prison to those who are bound.” (Isaiah 61:1b)

The big news in Israel this Sukkot is the forthcoming release of an Israeli soldier kidnapped by Hamas over four years ago. Gilad Schalit’s release was procured through an extensively negotiated “prisoner swap.” Over one thousand convicted terrorists, many of them responsible for multiple murders, will walk out of Israeli jails in upcoming days in exchange for Schalit’s return. Documented research from prior swaps shows that most of these men, women and children will quickly set about the business of attempting to heinously murder more Israelis in the very near future. Nevertheless, the nation celebrates the return of a long lost son.

“To proclaim the acceptable year of the Lord…to console those who mourn in Zion…the garment of praise for the spirit of heaviness…” (Isaiah 61:2-3)

“Instead of your shame you shall have double honor, and instead of confusion they shall rejoice in their portion.” (Isaiah 61:7)

This verse applies to many in the Body of Christ who have faithfully endured severe shakings in the recent past. Continue standing firm in love and grace. In His perfect timing, godly honor will replace the shame you’ve at times felt. A joyous restoration of your portion is His promise.

“He has covered me with the robe of righteousness as a bridegroom decks herself with ornaments.” (Isaiah 10b)

Amid the testings and trials you may face, never forget you are the beloved Bride of Messiah. Your difficulties are weaving for you robes of righteousness. Yeshua is decking you with ornaments of greater value than gold.

“Everyone who is left of all the nations which came against Jerusalem shall go up from year to year to worship the King, the Lord of hosts, and to keep the Feast of Tabernacles.” (Zech. 14:16)

Your ticket for the: Happy Feast of Tabernacles from Jerusalem

Happy Feast of Tabernacles from Jerusalem