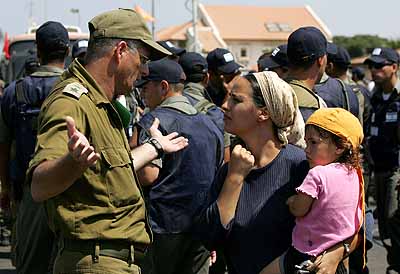 Dear ones, who love Israel,
Shalom from the Teplinskys! We have just returned from several weeks in Israel. Tensions throughout the country were high leading up to the disengagement from Gaza the day after Tisha b’Av. God bless you for your faithful prayers on behalf of the Jewish nation during this critical time. Our hearts ache with yours at the news reports, photos, and video footage of Israeli soldiers and settlers scuffling, but more often weeping together, over this tragic Jewish exile. We have summarized (which is hard to do!) a viewpoint on these ongoing events that we pray will be of help to you as you continue to stand with Israel.

The facts:
Israel’s unilateral relinquishment of Gaza, land located within its biblically mandated boundaries, has become reality. The Jewish State acquired Gaza miraculously but rightfully according to international law in the Six Day War of 1967. As a result, many Israelis are now grappling with what they sense is the beginning of the end of the past century’s Zionist dream. Others, as well as most nonreligious American Jews, remain optimistic. Virtually all, however, lament the country’s deep internal rift between those in favor of the withdrawal and those opposed to it.

As Israel and those who love her mourn the course of current events, Palestinians are taking to the streets in giddy celebration over their apparent victory in the past 5 years’ wave of Intifada terror. The message as they perceive it is clear: Terror works. Therefore, they don’t plan to let up on it.

Many key Israeli leaders and commentators, in addition to distinguished military and political experts, have warned of the near-certainty of increased terror and possibly large-scale regional war due to the withdrawal. Palestinian Authority Prime Minister Qureia and President Abbas publicly gloat, “Today Gaza, tomorrow Jerusalem.” They, like the leadership of the Gaza-filled terrorist organization Hamas, intimate their continued intent to pursue annihilation of, rather than peace with, the shrinking State of Israel. They have never renounced the decades-old Palestinian “phased plan”. The phased plan remains: (1) re-gain control of Gaza, as well as Judea and Samaria (aka the West Bank), including East Jerusalem, in order to (2) use these areas as a launching pad to destroy the Jewish State militarily. Meanwhile, Israel’s demographic destruction is still sought by flooding it with millions of alleged Palestinian refugees under a so-called “right of return”, until its Jewish population is reduced to minority status.

Recent statements by Israeli Prime Minister Ariel Sharon and US Secretary of State Condoleeza Rice point to America as the probable prime mover behind the forced withdrawal. With disengagement barely underway, Rice was quick to announce Gaza is just the beginning and certainly not the end. Israel must be prepared to make further concessions, relinquishing still more land not necessarily in exchange for peace. The world community appears (not-so-strangely) silent. By all appearances, the nations have set themselves even further to the dangerous task of dividing up God’s Land.

A condensed prophetic view:
Prophetic Scriptures and history show that nations will eventually reap what they sow concerning Israel, and likely face head-on the impact of metastatic global terror. The prophetic Scriptures also show that the disengagement is but a chapter in Israel’s modern history. The larger perspective is that Israel is the flashpoint of global war (some call it World War III), both in the natural and supernatural. Certain battles will play out differently than some of us expect. Intercession will make a significant difference and avails much; however, there remains a dimension of human free will that God does not cross. For that reason prayer is especially important when human and governmental choices are made that appear contrary to His will, for the severity of their impact can be lessened through His mercy. In any event, God’s character and eternal purposes for the Jewish nation have not been ~ and can not be ~ shaken or altered. (See section below for Scripture references.)

God also loves and desires to save the Palestinians. He has strategically placed believers in Gaza to minister light. In wrath He remembers mercy.

Eventually Israel will enter into a period of false peace underwritten by the forces of anti-Messiah (anti-Christ). The disengagement may prove a step in this sordid direction. That does not mean, however, that we cease to expect and pray for mercy and for end-times Jewish revival in turning to Messiah Yeshua—both before and up until His return. That biblically prophesied revival has already begun! Any period of peace could be used for furthering the gospel throughout the Middle East. The heavens over Israel are not brass; the presence of God in the Land is profound. He is truly right at hand. We can (and will in the upcoming days) testify of His miraculous intervention in our own life, the Israeli body of Messiah, and Israel as a whole.

3. Satan has always sought, and still seeks, to destroy the Jewish people and the Jewish State. God, however, is victorious! (Rev. 12:1-17)

4. A time will come when all Israel will be saved (Romans 11:26), but at present most of the nation is not surrendered to God through Messiah. Biblical precedent exists that to the extent Israel exalts the Lord, Israel enjoys possession of the Land. (Deut. 11:22-25). Yet there is also prophetic biblical mandate for the re-gathering of modern-day Israel in a state of spiritual unbelief, followed by national repentance and revival. (Ezekiel 36:24-32, 37:1-14) Satan seeks to thwart this restoration of Israel on both the natural and spiritual levels. Again, however, he will not prove successful.

5. Through history and to this day, God has preserved a remnant within Israel that faithfully worships Him through Messiah Yeshua (Jesus). This remnant is maturing and increasing in number. Through their intercession joined with that of Gentile believers, mercy is released to the nation as a whole. (Romans 11: 1-5)

6. For His Name’s sake and glory, as well as to draw humanity—including Palestinians—to His Son, God will show Himself strong on behalf of those called by His Name, the children of Israel. (Psalm 2, Psalm 46:8, Psalm 83). God will restore to Israel at some future point territorial control over Gaza and more. (Josh. 1:3-4) He will also judge those who are set to the task of dividing up His Land. (Joel 3:2, Zechariah 12:3)

[* The above Scripture references are exemplary only, and not necessarily a complete listing of all references on the topic.]

Therefore:
1. Bless Israel. Pray for the peace of Jerusalem (in all its specific dimensions); those who love her will be secure. (Psalm 122:6) Pray that in their distress, Israelis will cry out to God as their only Savior and Hope (Hosea 6:1, 14:1-7). Pray that Israeli believers will be anointed boldly in the power of the Holy Spirit so that many will be saved through their witness of Yeshua. (Romans 10:1) Remember to lift up those believers serving in Israel’s armed forces, and to petition the Shield of David for a minimum of bloodshed in disengagement’s aftermath.

2. If you live in the US, write your elected officials, including the President, and express your opinion on America’s present policy toward Israel. If you live elsewhere, voice your opinion to the appropriate governmental authorities. Pray that your nation and church will bless Israel.

3. Seek the Lord for creative ways to minister His love and salvation to the Jewish people. Perhaps you would like to co-labor with us and support the work we are doing in Israel. (More information on that soon.)

4. During these painful “birth pangs” preceding the end of this present age, and as you weep with those who weep, anticipate with joy our Beloved King’s return. Stay in His presence and in love with Yeshua, for we are warned that as evil increases, the love of many will grow cold.

5. Serve as light and salt within the context of your church and to Christian friends who may not understand God’s heart and prophetic plans for Israel. You can equip yourself and others by reading Sandy’s book, Why Care about Israel? How the Jewish Nation is Key to Unleashing God’s Blessings in the 21st Century, available through our web site, https://lightofzion.org.

Your ticket for the: Disengagement from Gaza