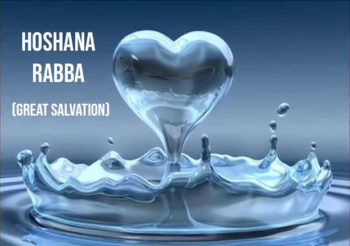 This Sunday, September 30, we will celebrate the last and greatest day of the Feast of Sukkot (Tabernacles). Called Hoshana Rabba (Great Salvation), it is the day on which Yeshua revealed publicly that He is Messiah. The day carries prophetic and messianic significance which the Jews of Yeshua’s time understood. Today, followers of Yeshua who are not Jewish deserve to understand that significance, too.

In Temple times the Hoshana Rabba was marked by an elaborate water ritual. Israel’s priests, singers and musicians would proceed ceremoniously from the Temple to the Pool of Siloam. From the pool they collected running water in large, golden urns. Chanting and crying “Hosheana” (Lord, save us), the priests then carried the water back to the Temple. There they poured it out at the base of the altar as a petitionary act for rain. (Bear in mind that in the dry land of Judea, life depended—and still does—on adequate rainfall.)

But this water libation ceremony was not only about physical rain. It was also a type of prophetic intercession for spiritual rain associated with the coming of Messiah. The petitionary act was based on the Hebrew Scriptures which speak of life giving waters poured out in the Messianic Age. The Jews celebrating Sukkot in Yeshua’s day were aware of these prophetic Scriptures and viewed the Hoshana Rabba ritual as a symbolic prayer for Messiah.

How beautifully appropriate, then, that “On the last and greatest day of the feast, Yeshua stood and said in a loud voice: ‘If anyone is thirsty, let him come to Me and drink. Whoever believes in Me, as the Scripture says, streams of living water will flow from within him.’ By this He meant the Spirit, whom those who believed in Him were later to receive.” (John 7:37-38)

Because those who heard Yeshua understood what He was implying about Himself, arguments over His messiahship immediately arose. Among our Jewish people today, some of those same arguments still persist. Therefore, Hoshana Rabba is an ideal time to pray over Israel: “If anyone is thirsty, come to Yeshua and drink!”

Many other rabbinic traditions are associated with Hoshana Rabba. These traditions are of varying degrees of consistency with the Scriptures, so please prayerfully discern the extent—if any—to which you might embrace them. One tradition, for example, teaches the last day of Sukkot represents the final day of divine judgment in which the fate of the new year is determined. Hoshana Rabba is treated as a mini Yom Kippur in which God may give special mercy.This is because the gates of heaven are said to open on the last day of Sukkot in order to dispatch the verdict issued on Yom Teruah and sealed on Yom Kippur. When those gates are open, the rabbis believe there is open access to God. A related belief is that God determines on this day how much rain each nation will receive in the coming year.

Tradition does not require fasting on Hoshana Rabba as a mini Yom Kippur, but mandates other rituals. These include, for example, circling Torah scrolls seven times while plaintively crying out for forgiveness, beating lulav willows until all their leaves fall out to signify the shedding of sin, and the reciting of certain prayers.

Traditionally practiced, Hoshana Rabba can reflect a somber uncertainty of forgiveness, despite the joy of Sukkot. How gracious of the Lord, therefore, to reveal His messianic identity on that day, with forgiveness of sin for all who trust in Him. “Therefore, with joy you will draw water from the springs of salvation.” (Isaiah 12:3)

Your ticket for the: Hoshana Rabbah: Sukkot’s Grand Finale