The Intriguing and Inspirational First Intercessory Prayer in Scripture 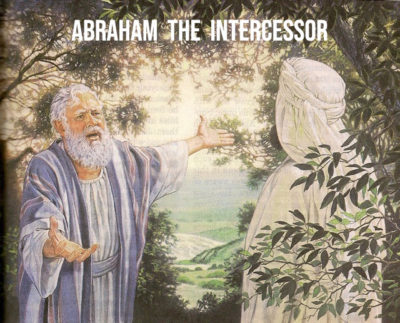 ARTICLE SUMMARY: Abraham’s intriguing ministry of intercession, unlocked and unpacked, can invigorate your own intercessory prayer life. The traditionally read Torah portion for this week, Vayera (Genesis 18:1-22:24), shows us why.

The first intercessory prayer recorded in Scripture is found in this week’s Parasha. There Abraham extends hospitality to three traveling strangers, one of which is probably the Lord Himself. (Genesis 18:1-19:1) Accompanied by two angels and taking human form, YHVH encounters the patriarch and talks openly with him.

God describes Abraham in this passage as the chosen inheritor of His covenant. The Bible identifies him elsewhere as God’s “friend” (Isaiah 41:8, James 2:23). In ancient times, a friend was not a facebook name of an individual you might never actually meet. A friend was someone known in real time and space, loved, enjoyed, admired and trusted. If friends entered into covenant, the friendship was taken to even more intimate, unshakeable levels. To be a covenant friend of the Creator of the Universe, therefore, dazzles the mind!

Because Abraham was God’s friend, the unprecedented unfolds. In Genesis 18, God convenes His heavenly council at Abraham’s tent. YHVH reveals to His friend that He is ready to judge the persistent evil of nearby Sodom and Gomorrah. First, however, He will “go down and see” (Genesis 18:21) if the situation there is as bad as He has heard. Of course, God knows every detail of everything taking place in those cities. Rabbinic and Christian scholars generally interpret verse 21 to mean He is deliberately revealing His extreme justice to the heavenly council, Abraham, Sodom, Gomorrah, and us.

But I think there is even more. In verses 17-21, YHVH seems to surreptitiously invite Abraham to speak into the council of heaven as a human intercessor. He extends a cloaked opportunity for him to intervene on behalf of humanity. For Abraham is not only God’s friend; he is a righteous human being. As such, he has authority to mediate on men’s behalf.

Recall that God instructed mankind to subdue the earth. (Genesis 1:28) For this task He gave us authority which, amazingly, He will not usurp or take back. He did graciously enable authority lost at the Fall to be restored, through the Cross and Resurrection, to Messiah Yeshua and those redeemed in Him. Therefore, redeemed mankind has “legal standing” to intercede concerning human affairs. Nonhuman, celestial beings, though sinless, do not possess this same authority.

I suspect Abraham intuitively senses God’s unspoken invitation to prayer. And so an exchange follows with which you are familiar. First the patriarch asks if Sodom might be spared for the sake of 50 who are righteous. Then he asks for 40; then 30, 20 and finally, 10. Perhaps Abraham perceives that withholding judgment for less than 10 would actually be unjust. Perhaps that is why he doesn’t request it.

Perhaps too, Abraham is a bit hesitant to stand in the gap between heaven and earth for the first time. Should he proceed like a lawyer before a judge, formally stating his case? Should he plead for mercy? Weep? Negotiate? Or speak matter of factly but heart to heart? Personally, I think the dialogue probably involved aspects of all the above. But fundamentally, the intercession of Abraham was a conversation between intimate, covenant friends.

I believe the Creator King was pleased with the patriarch’s “nerve” or “meek chutzpah” in this exchange. I also believe this first recorded intercessory prayer beautifully illustrates God’s pleasure in our bold but humble willingness to stand in the gap today for  righteousness’ sake.

To varying degrees, every believer is called to the ministry of intercessory prayer. In it, there are times you may be tempted to grow weary in the well doing-ness of it all. There may be times you struggle to make time to pray, don’t feel God’s presence, wonder how effective your prayers are, or simply get tired. This week, I hope you’ll be encouraged in the ministry of intercession.

Remember that you stand in the gap as an intercessor because you are first and fundamentally, God’s beloved, covenant friend. The Almighty and Loving I AM is pleased to converse with you. Because He is pleased with you, He invites you to intercede for His kingdom glory. So today, let Him strengthen you in prayer with His joy. Be invigorated in the high calling of intercession. Never forget that by the surrendered exercise of your authority in Messiah, God is moving heaven and earth. For if you ask of Him anything, according to His will your prayer is answered. (1 John 5:14, comma intentionally relocated.)

Your ticket for the: The Intriguing and Inspirational First Intercessory Prayer in Scripture

The Intriguing and Inspirational First Intercessory Prayer in Scripture