Redeeming Tisha b’Av in Your Life 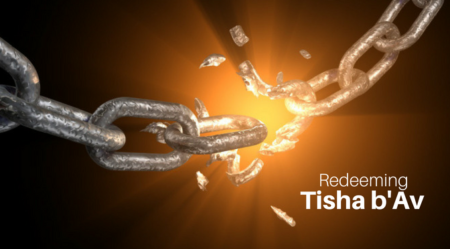 The saddest of all biblical holidays, Tisha b’Av falls this year on July 31-August 1. It literally translates “9th of Av,” referring to the 9th day of the fifth month of the biblical year. Tisha b’Av supposedly traces to the sin of the ten spies who scouted the Promised Land before the Israelites were to enter it. According to rabbinic tradition, it was on the 9th day of the fifth month that ten of the twelve spies wrongly reported the land would be impossible to conquer and inhabit. (Mishna Taanit 4:6) The people trusted the spies’ report instead of God’s promise. All that night they wept in rebellion and fear. (Numbers 13:26-14:38)  The rabbis say God was so angered by their unbelief that Av 9 became a night and day of weeping and recurring calamities throughout Jewish history. Not coincidentally, Israel’s First and Second Holy Temples were both destroyed on Tisha b’Av. Future years brought further calamities during and immediately preceding Tisha b’Av.

It is fair to say that even today, Tisha b’Av and the three weeks preceding it (called “Between the Straits”) are a time of heightened spiritual, and often natural, warfare. This phenomenon could be associated, as traditional rabbis teach, with a curse stemming from the sin of the ancient Israelites. In that case, the very day God had appointed for His people to enter the place of His promise became the day they were distanced from it. Access turned to blockage. Death in the desert replaced life in the land.

But God is a redeemer! Zechariah 8:19 says the “fast of the fifth month” (Tisha b’Av) will be turned to a day of feasting and joy in the Messianic Age. This refers to the time when Yeshua rules the earth from His throne in Jerusalem. That glorious era has not yet come. But those in whom the Spirit of Messiah dwells can engage even now with some spiritual realities associated with the Messianic Age. For that reason and others, I believe God is giving us an opportunity to align with Him to redeem Tisha b’Av.

Today, traditional Jews will fast and mourn the destruction of the Holy Temple and the sins of Israel resulting in that destruction. Similarly, today you can take time to repent of any personal sin revealed to you by the Holy Spirit. Unrepentant sin can lead to the destruction of God’s temple, your body, as it did with His ancient, physical Temple. But He is able to redeem your past. Tisha b’Av can be a day to intentionally turn from any areas of personal rebellion or fear that hinder trust. Be delivered from death in the desert to life in the land.

Realize that the “giants” in your life are your ” bread” and declare them as such. Arm yourself with Numbers 14:8-9: “If the Lord delights in us, then He will bring us into this land and give it to us, ‘a land which flows with milk and honey.’ Only do not rebel against the Lord, nor fear the people of the land, for they are our bread; their protection has departed from them, and the Lord is with us. Do not fear them.” Trust God. Be released fully into the place of Kingdom life He’s promised you!  Pray for Israel to do the same.

Your ticket for the: Redeeming Tisha b’Av in Your Life

Redeeming Tisha b’Av in Your Life