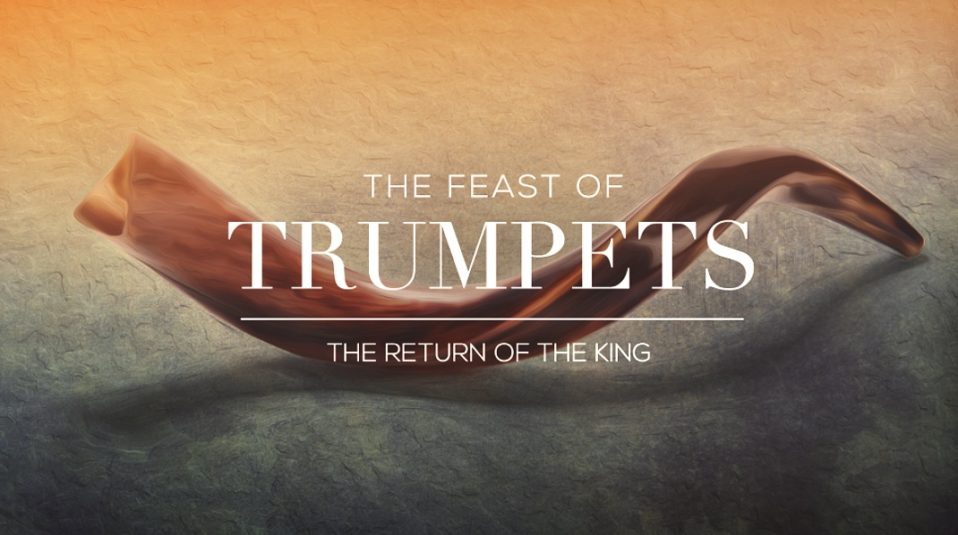 Yom Teruah falls this year on September 6-8. It is the first of three fall feasts, or appointed times with the Lord, set forth in Leviticus 23:23-43. Yom Teruah literally means Day of Blasting, but the holiday is more commonly known as the Feast of Trumpets. The day is to be observed by the blasting of trumpets and offering of burnt sacrifices. (Lev. 23:23-25) Then, ten days after Yom Teruah comes Yom Kippur (Day of Atonement), followed five days later by Sukkot (Feast of Tabernacles).  All three feasts will ultimately be fulfilled at the close of this age. However, the feasts are also significant times in and of themselves. They are not mere dress rehearsals void of value or meaning for today.

Yom Teruah has been observed as the Jewish new year (Rosh Hashana) for millennia. This is because Israel adopted a secular reckoning of the months to align with the calendars of neighboring (and pagan) cultures, long before the time of Yeshua. The Scriptures, however, do not link Rosh Hashana to Yom Teruah – except, perhaps, by overstretch of interpretation. The biblical new year occurs just before Passover on Nisan 1. (Ex. 12:2) Nevertheless, to those who observe Jewish customs and traditions without sacrificing the centrality of Yeshua, we sincerely wish you a very happy new year!

What Might Heaven’s Shofars Be Blasting This Yom Teruah?

This year we hear a herald of the “corona-tion” of Yeshua over all the earth, a summons to battle, a call to assemble before YHVH in repentant reckoning, a Jubilee decree for many held captive to evil, and through it all, a high priority to praise the Lord. We hear a distinct herald of His soon return, associated judgments and Kingdom splendor.

In a real sense, heaven’s trumpets will resound throughout the year, calling us to get our houses in order, aligned with God and His ways. Abundant grace and peace for the task will be given from our loving and compassionate Father. But we will need to be intentional to “make every effort to enter into His rest” (Heb. 4:11) to receive that grace and peace — and trumpet it to those who do not yet know the coming King.

Interestingly, concerning God’s rest, 5782 is a shmita year. A shmita is a sabbatical year for the physical ground of Israel. Every seventh year from the time the Israelites first entered the land, no crops were to be planted or harvested. Whatever grew of itself could be eaten by the poor and needy or by wild animals. (Ex. 23:10-11; Lev. 25:1-7) The main purpose of shmita was to remind us that both we and the land belong to, and serve, our Creator. The land sustains us by producing food, but that sustenance ultimately comes from God.

There is no record in Scripture of Israel having observed the shmita — and sadly, this was one reason for our exile. (Lev. 26:33-35) With the regathering of Zionist pioneers over 140 years ago, rabbis in Jerusalem declared the first shmita would take place in 1888-89. Their decree was contested by other rabbis, however, and was not enforced. Today, only a few Israeli farmers adhere to the practice of shmita. (Shmita Sourcebook, p.3).

How might followers of Yeshua honor the shmita today?To start, we can make every effort to enter and remain in His shalom-rest. (This does not suggest inactivity or passivity.) We can trumpet the good news of salvation as we have opportunity, thus allowing the spiritually poor and needy, even those who might perhaps seem as wild animals, to be fed the Word of life. We can make a special effort to provide for those in need of literal food and material possessions.

The upcoming new year is also a leap year. In a Jewish leap year, major calendar adjustment is made in the spring. This is achieved by observing the whole month of Adar twice: “Adar I” is followed by “Adar II.” The leap year was devised over a thousand years ago to realign the biblical feasts in their proper season, the biblical calendar having been replaced by a secular one. The decision to add a second Adar was made because Purim takes place in Adar, rendering it the most joyful month of the year. Therefore, according to tradition, each leap year brings us a double portion of joy.

Prophetic insights for 5782 consistent with the importance of joy can be gleaned from the Torah portions (parashot) traditionally read on Yom Teruah. Every Yom Teruah, observant Jews read and study Genesis 21 and 22. Genesis 21 describes the birth of Isaac, the miracle child of God’s promise. Isaac (meaning, “Laughter” or “He will laugh”) is the only patriarch God names at birth and whose name He does not change. (Gen. 17:19)

Recall that Abraham laughed when God told him he would have a son, and Sarah likewise laughed at the prospect. (Gen. 17:17; 18:12) But God, enthroned in heaven, also laughs. (Psalm 2:4) He delights in His own plan to vanquish evil, redeem humankind and restore His creation. The child of His promise is named Laughter more because of God’s consummate laugh than that of Abraham or Sarah.

God’s laughter resounds in Psalm 2, prophetically describing the days we are in at the start of 5782. As never in history, nations “conspire and plot together,” along with global elites and “kings of the earth,” “against the Lord and His Anointed One.” (Ps.2: 1-2) Before our eyes, they break off God’s laws and holy bonds (v.3). But YHVH eventually “rebukes and terrifies them in His anger and wrath.” (v.5) He proclaims victory over them and establishes the kingship of His Son to inherit, possess and rule the earth from Zion. (vs.6-12) And so, “the One enthroned in heaven laughs.” (v. 4) His laughter can be seen as derisive toward His foes but delightful toward His friends.

Through Isaac, laughter is fundamental to the identity and destiny of Israel – and those grafted into her. This kingdom perspective of God’s triumphant laughter echoes intermittently throughout the New Covenant. For the joy set before Him, Yeshua endured the Cross. (Heb. 12:2) “In this world you will have tribulation, but be of good cheer for [He has] overcome the world.” (John 16:33) Your “light and momentary afflictions work an eternal weight of glory” for you (2 Cor. 4:17). At the end times victory and union of Messiah with His Bride, a great multitude in heaven rejoices. (Rev. 19:1-8)

To be clear, we do not encourage laughing at tragedy or human suffering. Certainly God finds no humor or delight in such things. But we do encourage you to align your heart with the laughter in His, based on His perspective of victory, the joy of the end times harvest, and infinite glories which lie ahead.

On Yom Teruah, traditional Jews also read Genesis 22, recounting Abraham’s willingness to sacrifice Isaac. The story is known as the Akedah (“Binding”) and is revered in Judaism. Unfortunately, however, most translations of the Akedah from the original Hebrew are incomplete. This is because in Genesis 22:2, God uses the Hebrew word nah. Nah means “please,” or in older English, “I beseech you.” So the verse actually reads, “Then God said, ‘Please take your son, your only son, Isaac, whom you love . . . Sacrifice him there as a burnt offering…” But nearly every translation in nearly every language omits the nah.

Why, you might ask, does this matter? God requested, not demanded, the sacrifice of Isaac. In Hebraic understanding, this emphasizes Abraham’s profound, free will surrender, in faith and love, to YHVH. Abraham’s trusting obedience shines as an example to us today. It can also be seen as a prophetic intercessory act and foreshadow of the Crucifixion. Ultimately, the patriarch’s unquestioning surrender led to his eternal promotion in the Spirit. It gained him singular stature in God’s Kingdom. The promise he was willing to kill was, in a sense, resurrected to an even greater glory.

Keep in mind that Isaac, an adult at the time, also trustingly surrendered his will to that of his earthly and heavenly fathers. Carrying the wood upon which he’d presumably be sacrificed, Isaac’s obedience is a foreshadowing picture in verse 6 of taking up his cross and following our Lord. As a result, he too is promoted in the Spirit and gains eternal stature in God’s Kingdom.

In 5782 and beyond, our faith and love may be tested through circumstances which seem to kill the promise of laughter God has given us. It may or may not seem to us that He has sovereignly engineered the test. At such times, will you and I take up our cross and follow Him — or will we protest against His leadership? At God’s request, I want to willingly, in faith and love, lay down the promise He’s given me — as I have understood it — for an even greater fulfillment than I’ve imagined. I think you do, too.

Because He provided the Lamb, you and I can present to Him the burnt offering He desires and deserves on this Feast of Trumpets and through 5782. Romans 12:1 states, “I urge you, brothers, in view of God’s mercy, to offer your bodies as living sacrifices, holy and pleasing to God—this is your spiritual act of worship.” This sacrificial surrender may prove to be the consummate call of Yom Teruah, 5782. In the end, what could make for a happier new year?

Your ticket for the: Yom Teruah 5782: What are Heaven’s Shofars Declaring?